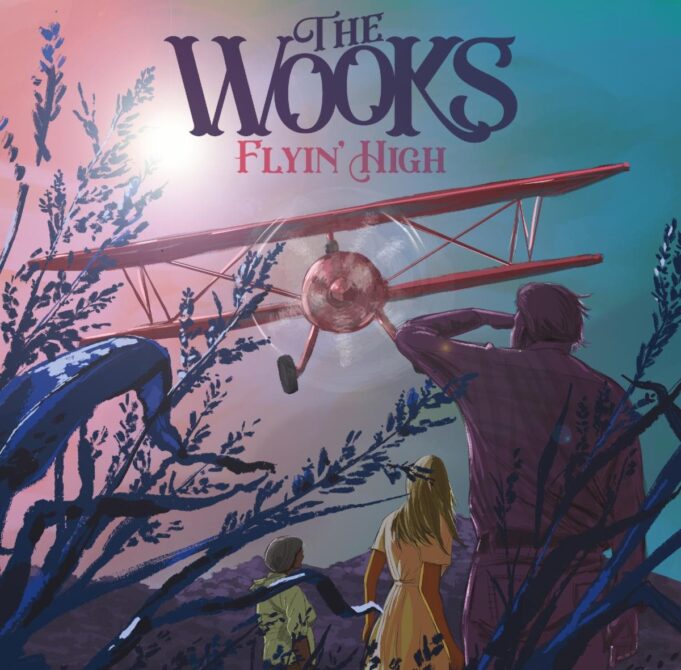 December 17, 2021 – Nashville, TN – Good, stand-the-test-of-time love songs tend to come from unlikely origin stories, but until The Wooks’ founder CJ Cain wrote “Flyin’ High,” from their upcoming album of the same name, not one of them has been inspired by the crash landing of a buddy’s World War I bi-plane. “He had bought this plane at a good price and would soon find out why,” says Cain. “He lost oil pressure and had to take her down in front of his family who had gathered in the yard to watch him buzz the farm. Luckily he made it out.” The resulting tune is a story of two different couples, real folks from the small town of West Liberty, Kentucky, where Cain’s father grew up, that falls somewhere perfectly between the sound of The Band, Van Morrison, and The Wooks’ ever-evolving signature style. The official video for “Flyin’ High” is out today; animated by Josh Clark, the video follows the storyline in intricate, beautiful detail. “Flyin’ High” is the first release from The Wooks’ third full-length album, Flyin High, out February 25, 2022.

Rather than repeating the formal studio experiences for past albums, The Wooks—CJ Cain on guitar and vocals, Harry Clark on mandolin and vocals, George Guthrie on banjo and vocals, and Allen Cooke on Dobro—recorded Flyin’ High over two sessions in Nashville in the home studio of bluegrass guitarist Jake Stargel. As a producer, he brought an easygoing vibe as well as acoustic expertise to the project, which is the band’s first full-length album since the fall of 2018. “Jake recorded us way more live than I have ever gotten to record,” Cain recalls. “This album has a lot of solos and vocals and all kinds of stuff that’s just the raw take. There’s no click track. We were trying to get a sound like Bela Fleck’s Drive album or Tony Rice’s work at Arch Studios with Bill Wolf. That live feeling. So much of bluegrass these days is almost autotuned and fixed to the point of perfection. We were trying to run away from that quickly as possible.”

After Tony Rice’s death in December 2020, Cain wanted to honor his legacy in some way, so he cold-called Bill Wolf to see if he would master the album. Wolf wrote back, asking to hear it – and then elevated Flyin’ High to the next level. “For a guy who’s done iconic albums all his life, he put a ton of work into this,” Cain says. “Bill told me to listen to it to see if I was satisfied with it, and I was like, ‘Man, what am I supposed to listen for?’ And he said, ‘Is it fun to listen to?’ I think he accomplished that.”

Inspired by the traditional as well as the unconventional, The Wooks have established a distinctive sound through original songwriting, exceptional musicianship, and outside influences ranging from jam bands to Southern rock. While their origin stories are diverse, all four members of The Wooks have forged a common bond that honors individuality and innovation. But with minimal shows to road-test the material on Flyin’ High, Cooke speaks for the band when he says he’s eager for fans to discover these new songs—on the album as well as the stage. “This band is definitely not a band that is set on keeping things to the way they sounded on the record,” he says. “We’re all about keeping these songs fresh and new-sounding as shows go on.

The Wooks are ambassadors for Can’d Aid, a nationally recognized nonprofit that rallies volunteers from all walks of life to build thriving communities; through their work with Can’d Aid, they’ve performed and donated instruments to schools and underserved youth.