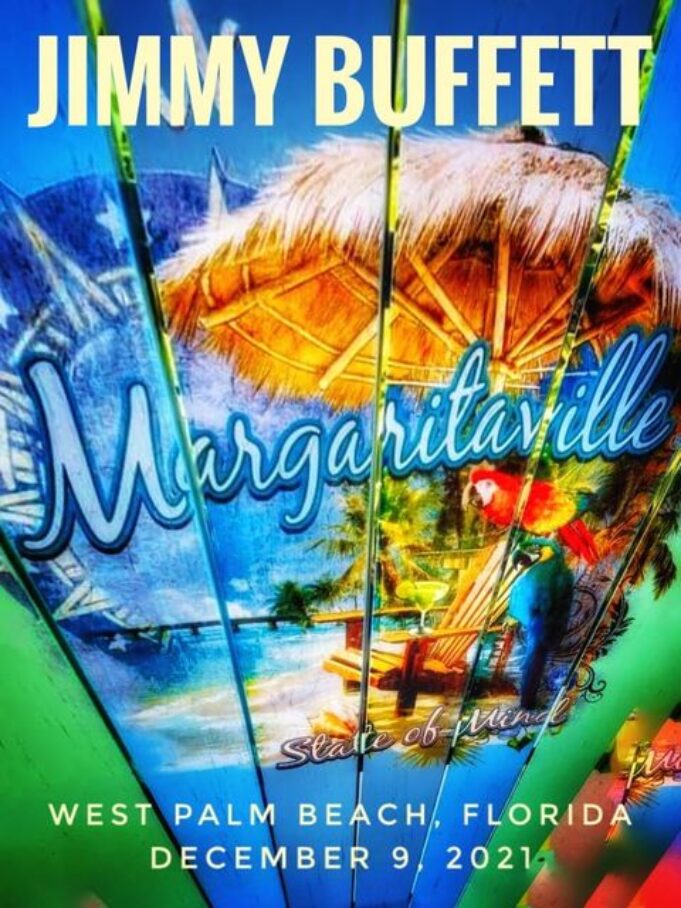 On an Idle Thursday in 87 degrees of sunshine in beautiful South Florida what else could there be to do while the rest of the country is in a cold spell? Go see Jimmy Buffett of course. The ITHINK Amphitheater in West Palm Beach, FL hosted Jimmy and his Coral Reefer Band December 9th for the Life on The Flip Side Tour.

The ocean vibes were in the air as the cars & trucks with palm trees and hula girls holding Elmer’s Glue shuffled into the parking lots. It was plain to see that Parrotheads, Keets, and Snowbirds were clearly taking over West Palm Beach for the day as they prepared to set up their oases of tailgates. From Cheeseburgers in Paradise, to shrimp on the barbie, served by Barbie in a hula skirt while getting Leid by Barbie’s friend. You can see it all, old and new & young and seasoned, there is nothing like a Buffet show! Some Deadheads would argue, but…

With the world opening back up from Covid this stop on the tour was special. It was an outdoor venue unlike the previous nights in Tampa, and Jacksonville. The Parrotheads were in full force and ready for the man himself to take the stage.

Jimmy Buffet hit the stage wearing shorts and guitar in hand to start the show with DOWN AT THE LAH DE DAH followed by every beach bar and taverns singing along to the predatory song FINS. Then it was OFF TO SEE THE LIZARD. Jimmy then broke out the GRAPEFRUIT JUICYFRUIT… It’s good for the soul. “The sea’s in my veins, my tradition remains.”

It was time for my heartfelt favorite SON OF A SAILOR. The band then throttled down in the warm Florida night into THE SLOW LANE then back into the Island sounds of steel drums with KNEES OF MY HEART. The crowd knew it was 5 O’CLOCK SOMEWHERE. Everyone sang along with drinks in hand Jimmy then assured the Parrotheads that COME MONDAY it would be all right because we’ve all met that WOMAN GOING CRAZY ON CAROLINE STREET reminding us of our Parrothead oath of GROWING OLDER NOT UP.

Humbling Key West with NOBODY FROM NOWHERE the ship then sailed into that ONE PARTICULAR HARBOR “La ora te natura E mea arofa teie ao nei” Jimmy then tapped longtime friend Mac McAnally who then paid respect to Allman Brothers Band with an acoustic version of LITTLE MARTHA. It was hats off to Tom Petty next with Buffett’s take on LEARNING TO FLY, but the Parrotheads were already flying by now!

The Band then continued with FIRST LOOK. We were then treated to Jimmy playing the Ukulele and singing DELANEY TALKS TO STATUES. By now most touring bands would have done their encores and been heading back to their hotels, not Jimmy and his Coral Reefer Band.

There was more and the crowd was hungry for all the hits. The band delivered back-to-back-to-back with the CHEESEBURGER IN PARADISE being served up first, well good God almighty which way do they steer now? I don’t know where I’m a gonna go when the VOLCANO blows. I didn’t ponder the question too long. It’s these CHANGES IN LATITUDE. Mac McAnally was called back to helm to steer the ship BACK WHERE I COME FROM.

As the night was winding down, we’ve already shook the hand of the mango man but have we had the LAST MANGO IN PARADISE? Fire up the blenders, the shrimps bubblin’ bubblin’ bubblin’ it’s time for MARGARITAVILLE that left the Florida crowd begging for more booze from that blender. Buffett and his Band kept delivering in a big way.

We’ve got to go fishing with A PIRATE LOOKS A FORTY followed by Jimmy’s’ all too familiar version of Crosby, Stills, & Nash’s SOUTHERN CROSS. “Now in my line of work I seem to see a lot more than most, Write em’ down, pass em’ around.” FLORIDAYS ended this great night of tropical rock and roll.

Till the next show……

Down at the Lah De Dah

Off to See the Lizard

Knees of My Heart

Growing Older but Not Up

Nobody from Nowhere (Will Kimbrough cover)

Learning to Fly (Tom Petty and the Heartbreakers cover) (JB Quote: “If you’re from… more )

Back Where I Come From (Mac McAnally cover)