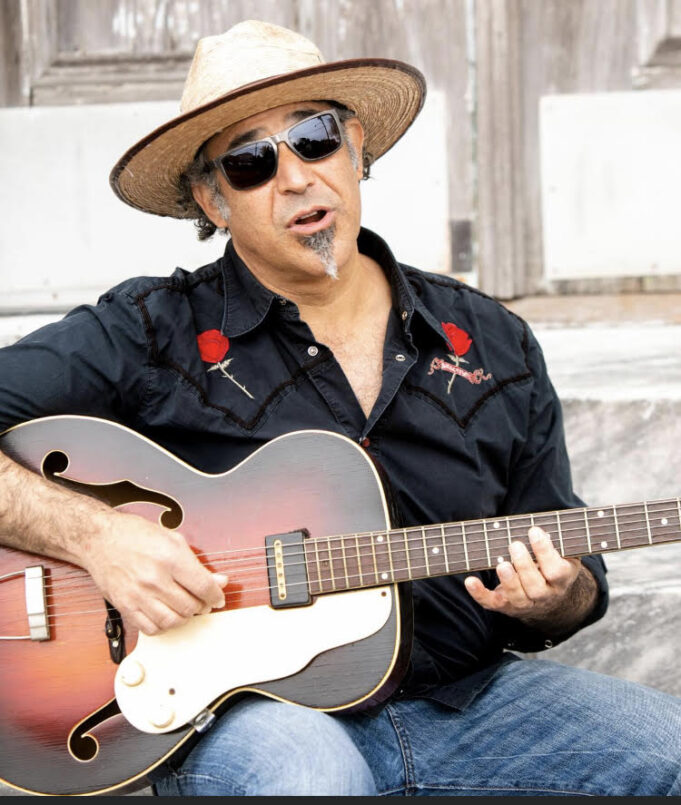 One of our favorite cities in the world is New Orleans, a city of food, culture, and one of the great musical cities in America. Coming from the Crescent City, Marc Stone is able to shine even within our Band Spotlight!

Since 1993 Stone has been developing his sound within the historically musical city of New Orleans where he worked his way up from the streets of the French Quarter to a role as one of the city’s most prominent artists. In addition to recording and touring with his own music, the artist has lent his talent to some of the great roots musicians such as Eddie Bo, Allen Toussaint, Leftover Salmon with Col Bruce Hampton and others.

Of late nominations have been piling up nicely, including Best Blues Artist 2020 by Offbeat Magazine and Gambit Weekly, as well as Best Blues Album 2020 for Live at Tipitina’s.

Stone is also the host and programmer for the Soul Serenade program on the New Orleans Jazz and Heritage Station, WWOZ 90.7-fm, where listeners can tune into classic American roots music and hear interviews with American music legends as well as new talent.

Over the last twenty years Marc Stone has toured the globe. For his first tour since the pandemic, Stone has been performing solo, bringing the classic New Orleans roots and blues sound to the masses who need it.

We were fortunate enough to catch up with Marc this week to discuss musicianship through COVID, his new album, and what we have to look forward to at The Lord’s New Church this weekend.

LMNR:   What have been some of your goals over the past 20 months or so as a musician, and what did you feel were a few of your successes?

MS: I wanted to make a new studio album that honestly reflected my journey thus far, musically and personally. I was fortunate to engage a lot of heroes of mine, who have become friends, mentors and collaborators over the years, as well as the core players from my band and some new talent to record original music that I hope reflects all the great roots music that I’ve been involved in while still remaining identifiably myself.

LMNR:   Has your perspective on performing live music changed at all given some of the obstacles of the pandemic?

MS: Definitely. This is my first tour since the pandemic started. It’s interesting to travel again and see where people are at with their consciousness of it at the moment.

I did very little during first year of the pandemic, and then started to branch back out in March. Since then, I’ve seen the ebb and flow of regulations, along with my own feelings of exposure and what the right thing to do was. At almost every show, whether a porch concert or backyard gig or venue show someone would come up and say it was their first live music experience since the beginning of the pandemic.

LMNR:     How do you view the alternative methods of livestreaming in comparison with an in-person live performance?

MS: No comparison, but I’ve had some really nice moments both performing and seeing performances on livestream. There’s a certain intimacy especially w a solo artist or small group when they can see their faces in the camera and play to it. I did a zoom show for a small group of folks in different locations during the shutdown and seeing them each groove in their cube was really fun.

LMNR:  What have been some of your favorite recent collaborations?

MS: Making my upcoming album “Shining Like A Diamond” has been incredible; working with co-producer/engineer Keenan McRae, my core band Terry Scott Jr., Keiko Komaki and Alex Dyring, amazing younger artists like the Naughty Horns and heroes like the late Alfred “Uganda” Roberts, Marilyn Barbarin, Leo Nocentelli, Alvin “Youngblood” Hart, George Porter, Jr, Reggie Scanlan, James Singleton and Papa Mali. The amazing Meschiya Lake was kind enough to do duet with me on a good ol’ wrist slittin’ kinda cheatin’ song with beautiful cello parts by Daniel Lelchuck, and Mike Dillon did all kinds of percussion on the album, including a totally rocked out vibraphone solo.

LMNR:  What can the audience look forward to hearing with your more intimate performances?

It’s a solo show, and I brought my old Steel National out for this tour, so lots of slide! Rawer versions of my originals, including stuff that isn’t out yet. Also going to dig into some deep Delta Blues and funky New Orleans tunes. I love playing solo, trying to keep some good groove in everything so people still feel it in their bodies while you have a really direct connection to their ear because there’s no band.

LMNR:  Where are you looking forward to playing next, and who will you be performing with?

MS: I’ll get back to New Orleans right before what was supposed to be festival season, and I have a few really special shows I’m leading or involved with. The first is Mon Oct 11th. It’s a tribute to New Orleans Rock n Roll and Funk pioneer Eddie Bo and the Lost Legends of NO Funk at Zony Mash Beer Project. It features Walter “Wolfman” Washington, Big Sam, Papa Mali, Reggie Scanlan, Marilyn Barbarin and others. The next is “Love In Vain – the Blues Roots of The Rolling Stones” on Fri Oct 15 at NOLA Brewing Co. We will pay tribute to the great Blues, RnB and Country artists that the Stones covered. The lineup features John Mooney, Meschiya Lake, Bruce “Sunpie” Barnes and many others.