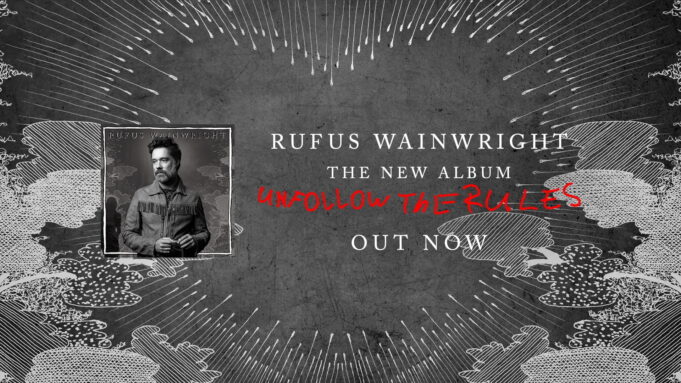 The Greek in Los Angeles welcomed the titanic songwriters on September 9 2021.

While Rufus Wainwright might have revealed some jitters at his Greek Theater performance last night here in Los Angeles, he showed no signs of flaws or mishaps that his audience would notice or even care about if there were any.

His ‘first show’ grumblings occasionally slipped out when he appeared annoyed or pondered if his delivery was executed exactly what he had planned. But make no mistake, Rufus delivered a stunningly beautiful 90-minute set with limitless, soaring vocals that kept the audience engaged and hanging on to every breath he took.

The show opened first with a set by Aimee Mann, the song writer who initially gained fame in the band Til Tuesday but later became an indie darling due to her own prolific and poetic works. Her set included several songs debuted that night, and she did not disappoint.

While his touring band has been paired down to a fine quartet, omitting a drummer, the sound was neither compromised or left sounding bare. Instead, the sound filled the acoustics of this fine amphitheater to perfection.

Unfollow the Rules is his latest release, which was originally set to be released in April of 2020, but the pandemic caused a delay, and was finally released in July of 2020. The pandemic also delayed the tour to support the album, but if the saying is true, that all good things come to those who wait, You can bet the audience received a long-awaited evening that not only exceeded any expectations one might have had, but also brought us all the emotional connection we have been craving for more than a year and a half.

Rufus can do that on any given night when he performs, but the magic that happened last night at The Greek Theatre was much more than what we all expected to feel after a long-awaited delay in live music. Mind you, Rufus gave us a performance that mere words cannot be expressed in any review, but last night, his songs and his voice gave us our heartbeat back.

Trouble in Paradise
Damsel in Distress
Unfollow the Rules
You Ain’t Big
Secret Sister (written for the documentary soundtrack ‘Rebel Hearts’)
Romantical Man
Only the People that Love
Peaceful Afternoon
This One’s for the Ladies (That Lunge!)
Treat a Lady
Argentina
Harvest (Neil Young Cover)
My Little You
Early Morning Madness
Devils and Angels (Hatred)

This was published yesterday, but wasn’t from this show: