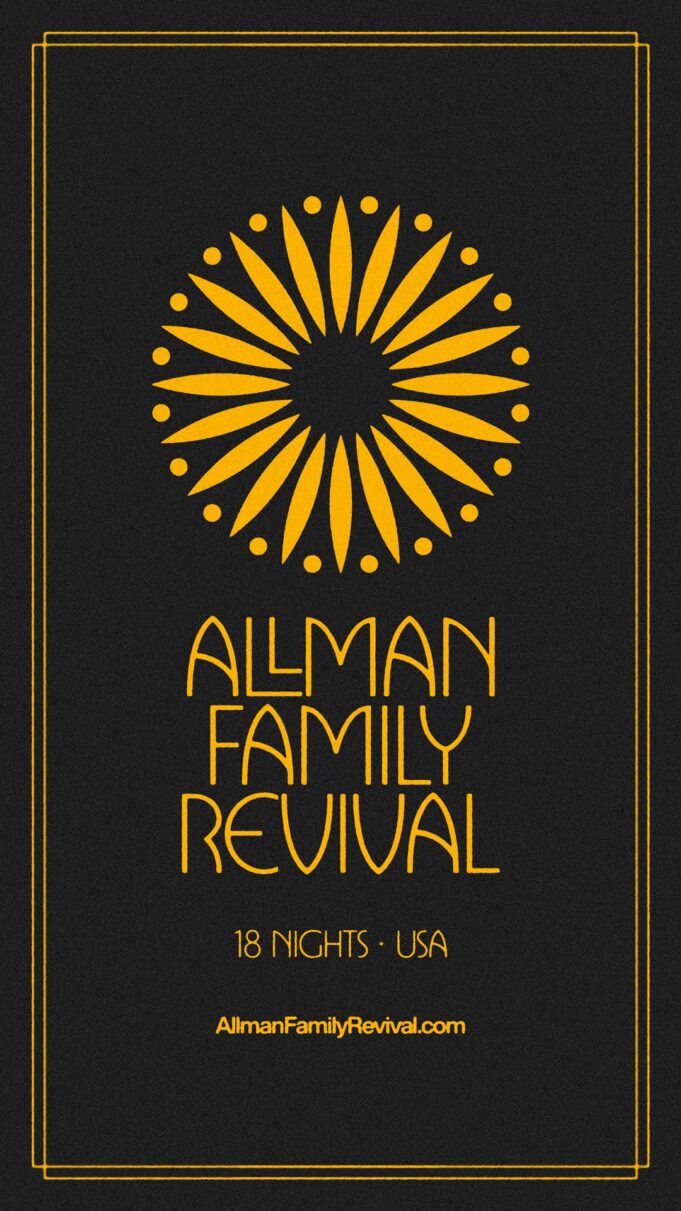 A CELEBRATION OF GREGG ALLMAN

Devon Allman is thrilled to announce the fifth annual Allman Family Revival, a celebration of the life, spirit, and music of Gregg Allman, hosted by his son, Blues Music Award-winning Devon Allman and anchored by his group, The Allman Betts Band.

On what would have been Gregg Allman’s 70th Birthday (December 8, 2017), Devon decided to gather his talented friends to pay homage musically. Musicians that had toured with Gregg, jammed with Gregg & inspired by Gregg turned up to throw down. Legends like Robin Zander of Cheap Trick, wunderkind Marcus King, and the Orbison’s, all took part in the inaugural performance, laying the groundwork for The Allman Family Revival to be an annual who’s who of musical talent.    Now…It’s a yearly tradition, and it’s grown from an annual celebration in San Fransisco to a full fledged coast to coast tour. Based on the format of “The Last Waltz” concert with The Allman Betts Band as the house band and featuring up to a dozen marquee names in music, it’s an epic 3 hour show unlike any other.

“Hard to believe we are in the fifth year of The Allman Family Revival shows! Says Devon, “This year is going to be bonkers! 18 cities, coast to coast in historic theaters with our beautiful, talented friends jamming all night long. Can’t wait!”

Public on-sale begins 9/17. For tickets and all up to date information, visit allmanfamilyrevival.com.

On December 8, 2017, Devon Allman invited a couple dozen of his closest musical compadres onto the hallowed stage of The Fillmore to perform a three-hour, multi-set monster of a concert for the sold-out crowd that filled the historic San Francisco venue in tribute to Allman’s late father, Gregg. The date was bittersweet; what would’ve been Gregg’s 70th birthday. For Allman, in a year when the award-winning musician lost both parents within a few months of each other, what started as a simple idea of music as medicine had given birth to The Allman Family Revival: a happy and healing cosmic experience celebrating the life, spirit, and indelible musical legacy of Gregg Allman.

The format for this ambitious undertaking, Allman says, was inspired by one of rock’s most famous concerts (and film). “I had recently re-fallen in love with The Band’s The Last Waltz and thought that would be perfect: let our band come out and serve as the appetizer; then one-by-one welcome our special guests; have them do a song they are known for and also do an Allman-centric song.”

Year one, the newly-formed Devon Allman Project with Duane Betts indeed welcomed a slew of heavyweights to the tribute: G. Love; Robert Randolph; Luther and Cody Dickinson; Alex Orbison; and Samantha Fish, to name a few. In 2018, Allman and Betts installed The Allman Betts Band as the Revival’s house band, adding wunderkind Marcus King to the already-impressive guest list for another sold-out affair at The Fillmore. By 2019, Allman extended the scope of the now-annual event, and the invites (including Cheap Trick’s legendary singer, Robin Zander), slating Allman Family Revival shows in San Francisco, Denver’s Mission Ballroom, and New York City’s Beacon Theatre. In 2020, the global pandemic forced Allman to pivot to a February 2021 date, adapting the Revival to a single, socially-distanced performance at Nashville’s famed Ryman Auditorium and included Jimmy Hall (Wet Willie) and JD Simo among the now-familiar faces of Allman’s ever-expanding musical family.

“I like having artists that knew Dad, played with him, maybe were an opening act, or were really influenced and inspired by him,” Allman says. “As for a venue, I prefer those turn-of-the-century to mid-20th century, old-school theatres. They are just gorgeous inside, sculpted for sound, and provide the perfect location for these very special shows. I love for this concert to feel like a night at the theatre for our audience.”   Once envisioned as a single celebration in San Francisco, the Allman Family Revival, in its fifth year, has evolved into a full-fledged, coast-to-coast tour.

As curator, host, and performer, Allman remains true to the painstaking mission of providing an epic event worthy of its inspiration. “I want to make sure there’s some ‘sonic ginger,’ to cleanse the palette amidst all those guitars,” Allman says with a smile. “I really enjoy working with the guests individually on setlists to make each show a very special night. It’s a daunting task, for sure, but a labor of love every time.” Among the marquee names scheduled for 2021’s Revival are Robert Randolph, Eric Gales, Jimmy Hall, Donavon Frankenreiter, Joanne Shaw Taylor, Cody and Luther Dickinson, Lilly Hiatt, and Lamar Williams Jr., plus, of course, more surprises to come.

“My favorite part is just the joy of the audience. I can tell they are touched and getting every penny’s worth,” Allman says. “Knowing Dad is looking down saying, ‘Damn, son, all that hot jammin’ for me?!’ I know he’s tickled that we celebrate him. Because none of us has to do this. We all have busy careers. This is a ‘want to’ situation; absolutely, 100% about music and celebration and tribute.”