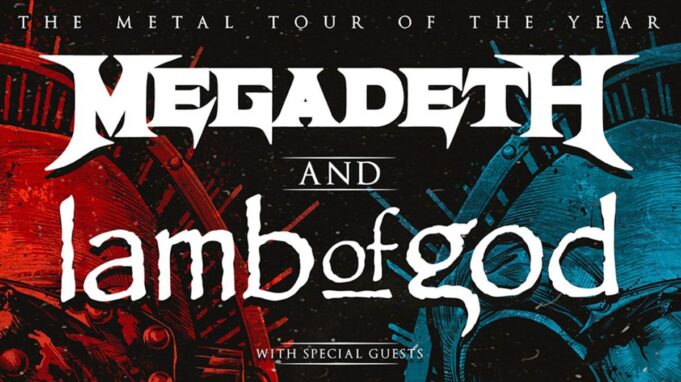 On September 13th the “Metal Tour of the Year” landed in Boston at Leader Park Pavilion, the tour’s 16th stop on a 28 date tour that began in Texas on August 20 and will end in Canada on October 2. The original tour was scheduled to start on June 12, 2020 but had to be postponed due to Covid-19. After one false start, the rescheduled tour features co-headliners Megadeth and Lamb of God along with openers Trivium and Hatebreed. Hatebreed replaced In Flames from the originally scheduled 2020 lineup.

Although Lamb of God front man Randy Blythe urged all fans coming to the see his band get vaccinated and wear a mask, the tour did not require either and it was hard to find a single person wearing a mask at the near capacity Boston Seaport Venue.

Hatebreed, the hardcore band originally from Bridgeport, Connecticut took the stage as fans trickled into Leader Pavillion. You could feel the power and force of the band immediately and although they had no problem captivating and engaging the audience, it’s hard not to how imagine how much more thrilling the band would be in a more intimate setting.  All four bands on the tour haven’t performed live for two years and on this night, halfway through the tour, you could hear and feel the energy and excitement of each band, thankful to be performing for a live audiences again after the extended hiatus. It was also clear that the entire audience regardless of who they came to see were equally as excited. If there were two themes of the night, it was the appreciation to be performing live music again and no moshing. Each band, starting with Hatebreed made reference to the venues no moshing policy but did their best to compensate for the venue restrictions. Hatebreed vocalist Jamey Jasta spelled it out with a hometown twist when he told the audience “this is not the Rat, the Channel or Bill’s Bar”

The aggressive nonstop assault of Hatebreed’s music isn’t made for the genteel and open setting of the Leader Bank Pavilion but even in the back rows of the pavilion you could feel the force of the music propelled by the rumbling drums and bass. Jasta’s vocals have a similar sound as Henry Rollins and the band at times has the same relentless force and fury of the Rollins Band. It’s unfortunate that In Flames was not part of the 2021 version of the Metal Tour of the Year but Hatebreed did an excellent job filling their spot and fit in nicely as the opener.

Next up was Trivium, from Orlando Florida.  Looking like he stepped right out of some blockbuster Hollywood post-apocalyptic movie set front man and guitarist Matt Heafy made repeated efforts to engage the crowd between songs. The crowd however from the very start needed no encouragement. Trivium tee shirts were well represented, and excited fans screamed out lyrics to anthems like “What Dead Men Say” and “The Heart from the Hate” as the Venue filled to capacity.  Although Trivium is considered a metalcore or thrash metal band they are more progressive than the other bands on the tour and delivered less of a punch and pure rock aggression than Hatebreed. Heafy repeated the themes of the night and seemed genuinely enthusiastic about playing for fans who also seemed genuinely passionate about what Heafy and the band delivered during their 45 minute set.

You could feel the energy change between sets as the co-headliner Lamb of God prepared to take the stage. VIPs and Photographers crowded near the pit waiting for the curtain to rise and the band to begins to play.

“Past the blackest heaven, above the dying stars

I watch me breaking into a million shards

But through the hardest hour,

before  Blythe screams “Wake up!”

and the band kicks into a full force and rage and the crowd goes wild. Blythe prowls the stage like a wild animal and his energy never lets up throughout the hour plus performance. On stage Blythe is a man possessed and up close you can see the intensity in his eyes, fixating and focused on the audience. Like a KISS concert the stage set is big with plenty of pyrotechnics, flames shooting up from the stage to the sky and spectacular lighting. Having played big arenas and mega tours for many years now, Lamb of God have fine-tuned their live show combining an intense and emotional performance with a big concert production that compliments the big sound of the band without distracting from it.  Even in the 5,000+ outdoor Leader Pavilion Lamb of God deliver a gripping performance that makes a direct connection. The only break in the energy comes between songs where at one point Blythe delivers the best line of the night, encouraging fans to get weird and “do things that would upset your mom” or when there is a stage malfunction and Blythe is forced to kill a few minutes with some stage banter.

Blythe is a fascinating character and one of the greatest frontmen in rock today. At the age of 50, it’s hard to believe he can perform with the same level of energy night after night. In a 2021 interview Blythe discussed his battles with alcoholism and his 10 years of sobriety. Today the singer looks like a well-conditioned athlete, delivering a physically demanding emotionally taxing performance.

At the end of the explosive performance it felt like things should have ended and everyone gone home with the flavor of Lamb of God still lingering on their palate. Nothing more was needed, and it would have been a satisfying end to the evening. But there was more to come and Megadeth delivered a nice contrast to the younger bands.

When Megadeth started in 1983 they were one of the heaviest bands, largely responsible for the popularization of the genre of thrash metal. David Mustaine is the heart and soul of the band and has been the one consistent member since co-founder David Ellefson’s recent exit from the band. 38 years later, Megadeth sounds much more melodic and song oriented than they did when they first started.

Mustaine recently recovered from throat cancer and hasn’t performed in Boston since 2017. On this night it was Mustaine’s 60th birthday and he was touring with bassist James LoMenzo, who was in the band from 2006-2010 and Kiko Loureiro (guitar) since 2015 and Dirk Vebeuren (drums) since 2016.

The band started things off to the slow and nasty growl of Mustaine singing Hanger 18, from the bands popular 1990 album Rust in Peace. Dave’s menacing glare and raspy vocals add to Megadeth’s apocalyptic lyrics and music, often religious, political and war related. Most of the song selection on the tour have been similar, drawing largely from the bands earlier material dating back to 1983 through 2002. Mustaine is still a master at his craft and the soaring guitar and more traditional rock and metal sound provided a nice counterpoint to the full on assault of the the opening bands.  LoMenzo and Loureiro did their best rock star posing and looked like they were having a ball on stage, also a nice counterpoint to Mustaine’s grizzled old guitar master and stoic elder grand wizard stage persona.

For anyone growing up in the 80’s or early 90’s the show had a nostalgic quality but in the best sense.  The music and the music industry have changed so much since 1983 but Megadeth continues to thrive and they have influenced so many new bands and whole new genres of metal. Despite the controversy always swirling around Dave Mustaine it was wonderful to see him healthy and flashing guitar brilliance and rock and roll greatness with the still very much relevant and impressive Megadeth.