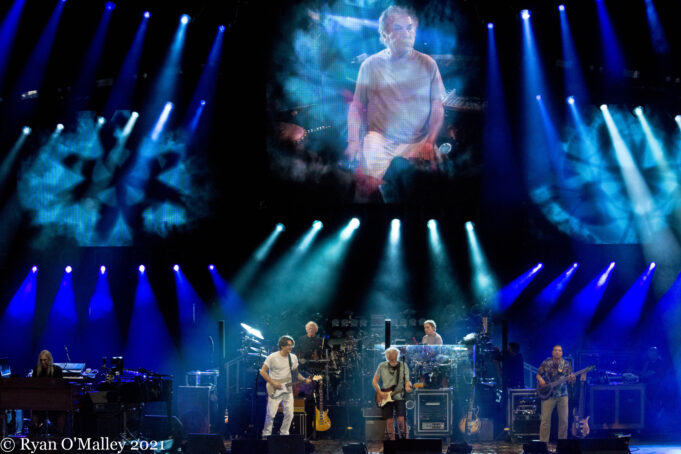 On August 23 2021 the historic site of Woodstock welcome Dead and Company back to New York. by Ryan O’Malley

Just a few shows into their extensive late summer/early fall tour, jam stalwarts Dead and Company delivered what may be viewed as the highlight of the entire East Coast part of the run when they stopped by the hallowed grounds of the Bethel Woods Center for the Arts on Monday, August 23.

After the covid-19 pandemic sidelined the band’s 2020 plans, the six piece outfit – Grateful Dead members  Bob Weir, Bill Kreutzmann and Mickey Hart with John Mayer, Oteil Burbridge and Jeff Chimenti – had been garnering solid reviews of the shows leading up to Bethel. Although the show had a slower start, the group’s visit to the legendary location of the 1969 Woodstock Music and Arts Festival included a second set which ranks up there with any of the most revered the band has played throughout its career.

Taking to the stage at 7:15, a brief jam lead to the instantly-recognizable notes of the mid-80’s Weir classic “Hell In a Bucket.” As is the case with most Weir projects over the last decade or so, the song’s tempo was noticeably slower than what people are used to from some of his previous projects including the Grateful Dead and his band RatDog. It might be age or a much-deserved desire to play the songs a different way, but at 73, Weir is continuing the tradition of reinterpreting songs each time they are played. After debuting with the outfit in 2015, Mayer has let the Dead’s music grow on him, and on the current tour, people have been commenting that he has become more in tune with the Dead’s philosophy of letting the music play you rather than you playing the music. Early in the Bethel show Mayer’s deep understanding of the music lead to a driving rendition of the Ron “Pigpen” McKernan blues staple, “Easy Wind.”

A first set highlight followed soon with a lively run through “Brown-Eyed Women” which found the outfit utilizing a solid, faster tempo throughout. The song not only showed that the band can indeed get the tempo going when the moment is right, but also featured one of the highlights from any Dead and Company show – the interplay between Mayer and long-time post Grateful Dead keyboard ace Jeff Chimenti. Watching the two on stage is entertaining on its own, with both musicians constantly grinning at each other and understanding that after so many tours together, they have that unspoken chemistry of knowing where the other is planning to go musically. It’s the foundation of any good band, and in this case it allows for some wonderful call-and-response soloing between the two.

Other first set highlights included a slower, drum heavy “Throwing Stones,” a tender “Row Jimmy,” which saw the ending morph into an almost reggae feel, and the set closing Weir double-shot of “Lost Sailor” and “Saint of Circumstance.”

Coming on for the second set shortly after 9pm, Weir addressed the crowd, saying “Fifty some years ago right here, we tried this next little sequence. It didn’t work so well for us then, so we’re going to try it again.” With that, the band broke into the opening of “St. Stephen,” eliciting a massive roar from the crowd who knew that Weir’s remarks coupled with the song meant the band would be taking a journey through the Grateful Dead’s original set list when they performed at Woodstock in 1969. The Grateful Dead’s performance at Woodstock is often brushed aside by fans and musicians because it didn’t quite live up to band standards. Whatever the reason – from constant rain, having a dark stage, going on late, and speculation that LSD the band ingested before the set kicked in at the beginning – the set remains towards the bottom of favorite shows by the band.

In Bethel on Monday, the band delivered the goods with the stirring 20-plus-minute version of “St. Stephen” which blended nicely into a solid take on the Merle Haggard number “Mama Tried.” One of the most memorable portions of the Dead’s original Woodstock set was the psychedelic opus “Dark Star,” which Dead and Company tackled with Weir providing solid vocals and Mayer and Chimenti again displaying amazing interplay over the psychedelic jazz drumming of Kreutzmann and Hart. Although it doesn’t happen every show, Burbridge, along with delivering intricate low-end bass lines throughout the evening, took over lead vocals with a beautiful rendition of “High Time.” Burbridge’s bass took center stage for a second set highlight when the outfit broke into the rarely played “Turn on Your Lovelight.” Although the version at the original Woodstock was sung by McKernan, Weir – who took over singing the song after McKernan’s death in 1973 – took the helm for the rendition on Monday which had everyone in the crowd dancing. Maybe it’s the fact that the song isn’t played very often these days, but Weir seemed to be having a lot of fun on stage and had some of his best vocals of the evening when doing call-and-response vocals with Mayer and Chimenti during the chorus.

Although “Lovelight” marked the end of the Grateful Dead’s Woodstock performance, Dead and Company still had time left in the second set, so Weir, Mayer, Chimenti and Burbridge left the stage to Kreutzmann and Hart who broke into the inevitable “Drums” and “Space” sequence that they’ve been leading for the better part of 50 years. Returning to the stage rather quickly, Burbridge took part in the drums section before having his own bass solo in the middle of the segue.

While hearing Weir sing Jerry Garcia songs instead of Mayer could still strike some as different, one Garcia song that Weir has come to master is “Standing on the Moon,” a poignant late 80’s Dead number with some of the most touching lyrics ever penned by the band’s late lyricist, Robert Hunter. It might have something to do with watching Weir belt out the ending refrain of “I’d rather be with you” and thinking about the instant connection to Garcia, but something about the way Weir has been delivering the song for the better part of two decades  always finds a way to tug on the heart strings of the fans.

A lively reprise of “Lovelight” once again had everyone dancing and shouting along with Weir before the band ended a triumphant second set that left the crowd enthusiastically calling for more. After the energy of the second set, it was a welcome treat to see acoustic guitars brought out on stage and the band kicking off the Deadhead favorite parting song, “Ripple.” It’s been a long-standing tradition that the crowd sings along with the song’s closing words of “if I knew the way, I would take you home,” and after briefly revisiting the unofficial “home” of the hippie movement at Woodstock in 1969, in Bethel it couldn’t have been more appropriate.