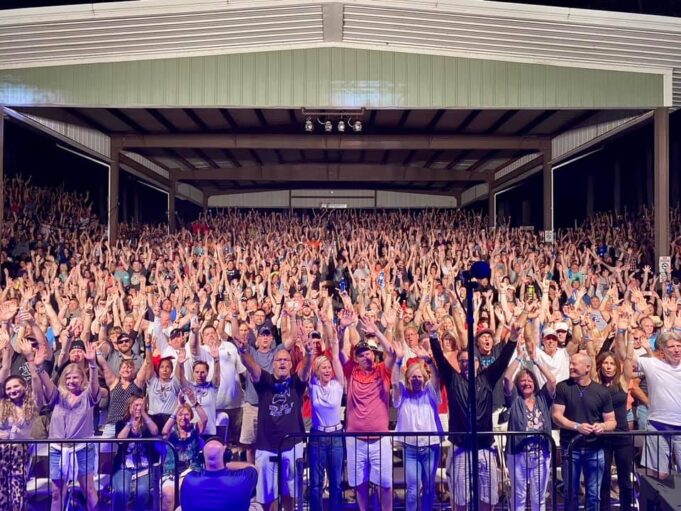 Now in its 75th year, the iconic Indian Ranch in Webster, Ma is just as popular as ever. Located on the shores of Webster Lake (or Lake Chargoggagoggmanchauggagoggchaubunagungamaugg!), the live outdoor music venue and campground has been home to many popular artists throughout the years. On Saturday, July 24, Get The Led Out graced the Corral Stage and came out swinging.

I have to admit that this was my first experiences of both Indian Ranch as well as Get The Led Out. I wasn’t so fully prepared to be blown away! The beauty, the sound quality, the production overall was just top notch from the start. The amphitheater provided a nice intimate setting and each seat had ample room and came with a view. Thankfully I arrived early as the place was already buzzing about with Led Heads.

The sextet, whose passion it is to bring the studio recordings of Led Zeppelin to life, brought an arsenal of songs performed over two sets. The weather held a perfect New England summer backdrop as the band opened with “Good Time, Bad Times.” From the opening line the sold out audience was engaged. Hit after hit, they just kept coming.  “Dancing Days,” “D’yer Mak’r,” “Ramble On,” one after another they plowed through classic rock hits. They even managed to sneak in a few little lesser known numbers into the mix: “Hot Dog” and “Black Country Women” were played to the T.

As the sun set, gleaming off the lake, the band took their set break. I took the opportunity to grab some food and beverages and do a little walking around. I walked down to the beach to get a view of the Indian Princess, one of the few remaining paddle-wheel riverboats still in operation. I walked up behind the bleacher seats and found a shady picnic table area to finish my meal and just as I took my last bite the music was starting again.

“Moby Dick,” “Kashmir,” “When The Levee Breaks”— it was like a Zeppelin smorgasbord with all the fixin’s. And then the inevitable happened. We came to the end of the show. You knew “Stairway To Heaven” had to happen and the band was almost drowned out from the singing crowd. With that came the encore, and quite frankly one of Zeppelins biggest hits, “Whole Lotta Love.”

Don’t forget that Indian Ranch has the Mike’s Hard Lemonade Concert Series running all summer long and if you missed Get The Led Out this time around, they’ll be back at the same spot on Friday, August 27. Get tickets here.

Shows at Indian Ranch are sponsored by Mike’s Hard Lemonade.