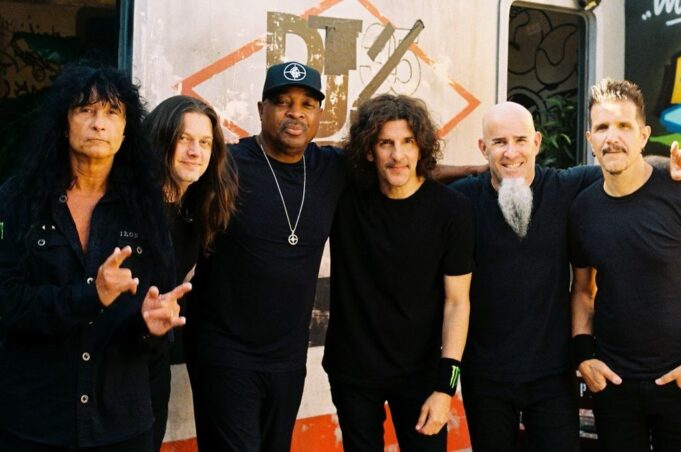 Having been born after the year 2000, but raised on older rock and metal, I never got the chance to see some of my favorite bands. Whether they’ve broken up over the years or their members have fallen victim to the dangers of rock stardom, many of these bands stopped touring before I was born or when I was very young. Not all, though.

I have had the great privilege of seeing many of these artists in their later years, touring in reunions, farewell tours, and even new album tours if I am lucky. Throughout my relatively limited concert-going career, I have witnessed prog gods Rush many times at the end of their 40+ year career (RIP Neil Peart, the GOAT). Not only that, but I have seen Roger Waters, Iron Maiden, Judas Priest, Deep Purple, and Slayer, all touring still decades into their illustrious careers.

You can imagine my interest, then, when I learned of Anthrax’s 40th anniversary live stream. I started my journey into metal with heavy metal and thrash, and so Anthrax’s style and influence were seen well throughout my metal coming of age. Unfortunately, the pandemic had to restrict this great milestone of theirs to a stream, but I am glad that there was still a way for Anthrax to celebrate their XL anniversary with fans.

The show begins with a slow-motion shot of drummer Charlie Benante striking a cymbal. A clock ticks and the Persistence of Time album cover flashes on screen alternating with images of the stage. You can hear the squeal of Scott Ian’s guitar, the riff chugs, the lights flash, and now begins the thrash. The band’s presence roars onto the stage with a heavy start, their song Fight ‘em ‘Til You Can’t.

Lead singer Joey Belladonna hops around center-stage holding half a mic stand, and delivers the vocals in his classic style, backed by the voices of both guitarists on support vocals. From there, the show doesn’t slow. They move straight from Fight ‘em ‘Til You Can’t into Madhouse, one of my favorites from their album Spreading the Disease. Red and yellow lights flash, and the stream catches an angle of Belladonna from his feet, a callback to the album’s cover.

The show continues with Caught in a Mosh, Metal Thrashing Mad, Got the Time, and I Am the Law. The thrash is interrupted twice during this period by guest appearances over video from prominent rock and metal artists and fans, including Gene Simmons and Paul Stanley of Kiss, Rob Zombie, DMC, Chris Jericho, Mark Osegueda, Jason Mamoa, and Mike Portnoy. All of them speak highly of the band and their long career, congratulating them on their anniversary. Many of these men have toured and headlined with Anthrax, and you can tell by these videos the kind of effect the band has had on their surroundings during their career.

The concert goes on, eventually coming to a close with a guest appearance by rapper Chuck D of Public Enemy for their song Bring the Noise, and ending the slow with a great thrashing performance of A.I.R..

Throughout the show, all of the members of the band performed fantastically. Benante was skilled on the drums, showing more skill and energy in his playing than many a drummer decades his junior. Both guitarists deliver fantastic solos and driving thrash riffs. Belladonna’s vocal stays true to his original sound, never having deteriorated over the years, only matured. In all, the show was exciting, energetic, and a great reminder of what we have been missing over more than a year away from safe concerts.

I cannot wait to get back out there and see some shows. Anthrax’s performance was a testament to the spirit of rock and metal from their era. These guys won’t stop, the rock just keeps on coming, and I think we’ll still be able to see great performances from them and others in their community for years to come.

If you want to see more of Anthrax, check out their website anthraxlive.com.

I hope that the world gets safer and we can get some live shows from them soon. Happy 40th Anthrax!