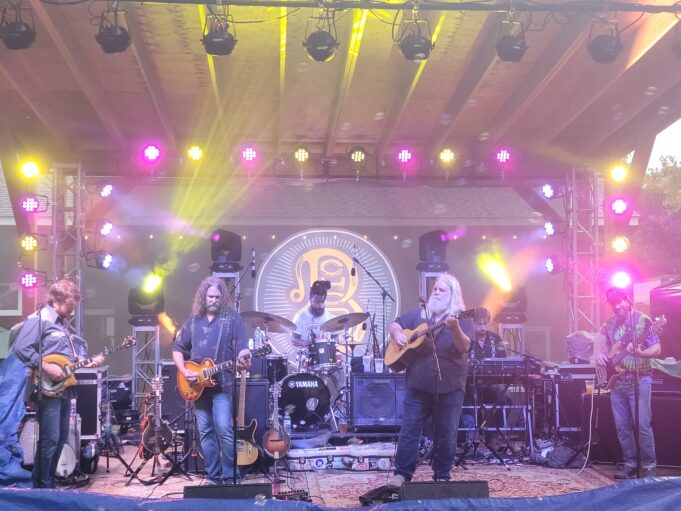 by Andrea F. Flohn Some video and photos by Evan Franks

On the evening of Saturday, July 17 Leftover Salmon returned to the B Chord stage for another rip-roaring good time, which is apparently the only kind the Colorado-based group knows how to have. And though the skies over Loudoun County, Virginia had remained largely stormy all that morning, the rain gave out that afternoon and gave way to blue skies.

As the band was finishing up, the rain had just got started. Luckily, fans came prepared and took shelter beneath their picnic tents, umbrellas, ponchos, and slickers. The staff at B Chord scrambled to cover stage speakers and cameras while tapers hustled to protect their recording gear. Leftover Salmon was ultimately welcomed to the stage by a deluge and an audience that was hiding in every nook and cranny on the hill to stay dry.

Despite their damp undertaking, the band gladly opened their first set with an upbeat folk tune called “Sing Up to The Moon,” in which Herman sings “It’s Saturday night/Work week’s through/I’m gonna head down to the B Chord/Drink a couple of brews!” Next, Drew Emmitt sang through a funky “Flying At Night,” which features Andy Thorn on banjo and guest keyboardist, Jay Starling.

The band continued on through “Liza,” which is always a crowd favorite and for just a moment, made us feel like we were dancing on a beach in the Caribbean. Other set highlights include “Light Beyond the Rain,” which couldn’t have been timed more perfectly, “We’ll Get By,” and “Funky Mountain Fogdown,” featuring Thorn on fiddle. The band ended their set with “Better,” which features a ska-punk rhythm created by bassist Greg Garrison and Alwyn Robinson on drums.

Set break yielded a steady drizzle and darkened skies, but the crowd responded with blissful ignorance. They were simply all too busy enjoying themselves, and the temperature seemed just right for a little rain anyway. We dried off under a tent and mingled with friends who were just gearing up for the party that would take place over set two.

The drizzle turned to a drip as Leftover Salmon waltzed back into position to play their second set. Herman began with a little confessional saying, “You know, I grew up in Pennsyltucky and moved out to Colorado and Oregon and I gotta say, there’s nothing like running around in an East Coast rainstorm and saying, ‘BRING IT ON!’ ”

The crowd cheered and whistled in agreement as the band went into “Hollerwood,” featuring some of Drew Emmitts’ best vocals of the evening, as well as a slide guitar solo by Jay Starling. The band shifted gears into “Boogie Grass Sound,” sung by Vince Herman. One highlight from the set was Gary Clarke Jr.’s “I Don’t Owe You A Thing” spat by the smooth blues vocals of drummer Alwyn Robinson.

Additional highlights included “New Speedway Boogie,” along with “Whipping Post” and their set two closer “Boogie,” which featured a few of the openers from Song From The Road. The band waved to the crowd as they made their initial exit from the stage, only to return moments later for a “Little Light” encore.

Before making their final departure for the evening, Vince addressed the crowd once more and said he hoped to see them the following day for ‘Sunday services.’ The crowd made no motion to leave the premises following Herman’s comment which confirmed their interest in returning for more music the following day.

Sing Up To The Moon

Light Behind The Rain

I Don’t Owe You a Thing