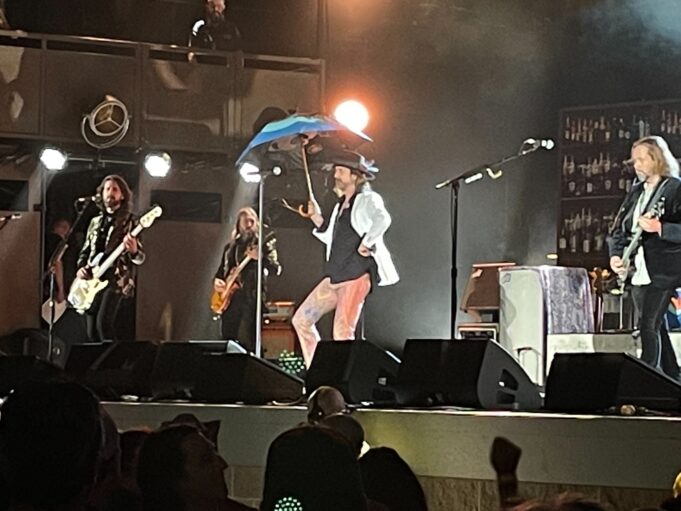 Nestled in the backwoods of  the lake region in the freedom state of Gilford, NH rock n’ roll in 2021 is back and alive and well courtesy of one of the innovators of that brand, The Black Crowes.  After an eight year hiatus the band reminded the audience why they are still the one of the best live bands in the business.

Backed by new members Joel Robinow (keyboards) Brian Griffin (drums) MacKenzie Adams & Leslie Grant (backup voxals) and from the band Earthless on lead guitar Isaiah Mitchell. The chemistry between Isaiah and band leader Rich Robinson was undeniable- he wasn’t flashy but played the parts with ease and urgency when the solos needed to push the energy higher onstage.

They came back at the right time too as traditional blues and southern rock music is making a quiet comeback by bands like the Rival Sons, Ghost Hounds,  The Damn Truth, openers Dirty Honey and so many more.  Watching the masters Chris & Rich Robinson get the packed amphitheater on its feet and swaying to what put the band on the charts when they first began their debut “Shake Your Money Maker” was refreshing.

The one two punch to kick off the show of “Twice as Hard” and “Jealous Again” got the Amoricans (what their fans dubbed themselves, named after their third lp Amorica) on their feet and kicking the pavement and they didn’t  stop until the  night was over.  The band tore through their debut showcasing their platinum hits “She Talks to Angels” and “Hard to Handle” and  the soul stirring “Sister Luck”  augmented by Isaiah’s  ‘Rossington’ like slide guitar lead. Chris Robinson’s swagger and voice were in top form.   It’s hard to believe that after so much touring his unique soulful voice is still intact.

The second part of the show kicked off with the raucous anti-establishment anthem “No Speak, No Slave” and the songs from their critically acclaimed sophomore record The Southern Harmony & Musical Companion kept coming including the tour debut of “Sometimes Salvation” which is this band’s “Purple Rain.” The Black Crowes had the entire audience in rapt attention as Chris belted out the lyrics and Isaiah scorched the solo paying homage to the original guitarist that recorded the song, Marc Ford.

The band closed the set with a very fun “It’s Only Rock n Roll” the classic by the Rolling Stones and one of the bands that immensely inspired the Crowes.

A few things i noticed walking through the parking lots was the closeness of the fans.

The band early on cultivated a following that would stick with each other until the end.   The only other band I’ve seen with such a familial bond between fans was with the original Grateful Dead  and it seems the Dead’s fans have come around based off of the Dead shirts in the audience.

The Crowes various affiliations with the Dead dating back to when they opened for them in Tampa Bay in 1995 has finally seemed to pay off based off of the large crowd that gathered on a perfect Saturday night.

Openers Dirty Honey warmed the crowd with a raunchy set of 70’s to early 80’s like rock n roll reminiscent of AC/DC, Guns and Roses or Cinderella but true to form.  The highlight came with a blistering covet of Aerosmith’s “Last Child” and the power ballad “Another Last Chance” had fans reaching for lighters they forgot to bring.   Guitarist John Notto’s ferocious guitar solos matched singers Marc Labell’s vocals like Perry & Tyler & Chris & Rich Robinson.   The future seems bright for Dirty Honey keep a look out for  when they start their own headlining tour.