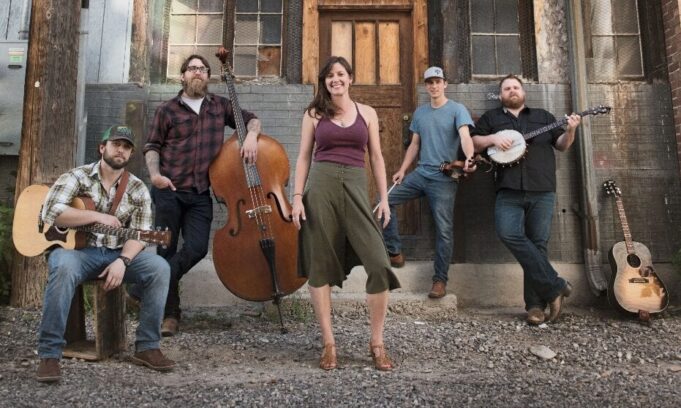 BOZEMAN, MONTANA – Bluegrass musicians are the real deal. They are instrumental virtuosos and high-lonesome vocal masters that create haunting musical moods with every stringed composition. Montana’s Laney Lou and the Bird Dogs, the five-member bluegrass ensemble with the soaring harmonies and the rapid-fire picking, bring modern authenticity to a revered genre.

“Our band entered the recording process of this album with a collective goal to push the boundaries of what we’ve written and sounded like before,” says Schiffer. “We expanded on what the bluegrass genre typically sounds like by taking creative liberties with each song, adding pop and rock influences throughout the album. We all went through creative and personal transformations in the past year, and it shows in our songwriting. The title, Through the Smoke, fits perfectly with the theme of change, rebirth, and resilience found in these songs – this album represents us in our most honest form.”

“Montanans are a family, and we have been a part of it for eight years now,” says Moore. “We have continued to evolve in a way that brings more people to the party every year. The Northwest, Rocky Mountain region, and the West Coast are on board, and we feel more ready than ever to meet our friends across the nation, expanding our family one city at a time.”

LMNR: Were there any unique or challenging aspects to recording this new album?

Lena Schiffer: As with all records, there has to be a source of funding which remains a major hurdle for independent bands trying to “make it” in the music industry. We decided to run a fundraising campaign on Kickstarter for this album like we did for our 2019 album Sweet Little Lies, although it felt difficult asking for money in the middle of a pandemic. We are very fortunate to have a strong fan-base that was eager to help us in this difficult year. Otherwise we were
extremely lucky to have two weeks to safely travel to California in our van, and really take our time recording this album. The whole process felt like we had time and space to give to the project since we weren’t distracted with touring. In many ways, this year was helpful to our process.

LMNR: Bluegrass can be a bit of an ol boys club- but with the rise of a few female led bluegrass bands, is the ceiling solid, cracked, or broken open?

Lena: I would say the ceiling is cracking open, though there is a lot of work to be done! It is not uncommon for me to be the only female performer in a night, and that doesn’t just hold true to the bluegrass genre. It is great that we are seeing more female performers in the genre, and I am happy to be a part of the change.

Lena: Dolly Parton should be named a saint when she passes on. She is an absolute icon who relates to people of all genders, beliefs, cultures… So yes, she’s the greatest!

LMNR: With the hipness factor of bluegrass and old timey instruments gaining, do you feel as if you MUST move to Brooklyn?

Lena: I think something that makes our band stand out is that we are from Montana – one of the least populated states out there! There would certainly be some perks to living in a city that is surrounded by a hub of modern bluegrass, such as Brooklyn, but we feel connected to Montana and the western states. We gain inspiration from the big sky country, and we have a beautiful place of respite to come home to after a long tour. I don’t picture us moving any time soon.

LMNR: What is it about your home region that has helped you to grow as a band, and how can we hear it in your music? Is there something specifically Bozeman about your music in your mind?

Lena: Bozeman has a great local music scene of all genres, and I think starting a band in a smaller town can actually be advantageous. It’s less competitive and you get to know other musicians and venues quicker than you might in a larger town. Because of this, we were able to get paying gigs at bars almost immediately which in turn influenced our writing and playing style and gave us real practice for live shows. I’m not sure if you hear “Bozeman” in our songs in an obvious
way, but the fact that we live in a beautiful place with a lot of open space to explore gives us a nice canvas to write from. We have a song on the new album called “Hi-Line”, which refers to US Highway 2. The Hi-Line refers to a stretch of highway following the BNSF railway that spans Northern Montana and is full of big open skies and quaint towns. I was driving the Hi-line a year ago, alongside a slow moving train. The sky was blue, the landscape was desolate, and I
started humming a tune. It doesn’t get much closer to Montana inspiration than that!

LMNR: I see you are playing with the Steeldrivers a few times on this trip. Have you met them before and any stories?

Lena: We haven’t joined the Steeldrivers before, but we are really looking forward to a few dates with them. I distinctly remember going on a walk about 8 years ago before our band got started, and looking down at my phone to see who was playing on my Pandora station. I had done this many times before, and everytime I would look, it was the Steeldrivers. I fell in love with their sound, and when I met our banjo player Matt Demarais we bonded over our mutual appreciation for their music. It almost feels unreal that we get to share a stage with them this summer, because
they have been a huge influence on our group. I’ll do my best not to make a fool of myself when I meet them! I am really looking forward to playing our hearts out to a crowd again, and sharing these tunes! A majority of the songs on the new album have never been heard before, which is different than when we are touring full time. In some ways I think it allowed us to let our guards down when writing, and in turn we produced a very honest album. Musicians are resilient folk, and I can’t wait to hear what other artists have come up with in their year and a half ‘off’.