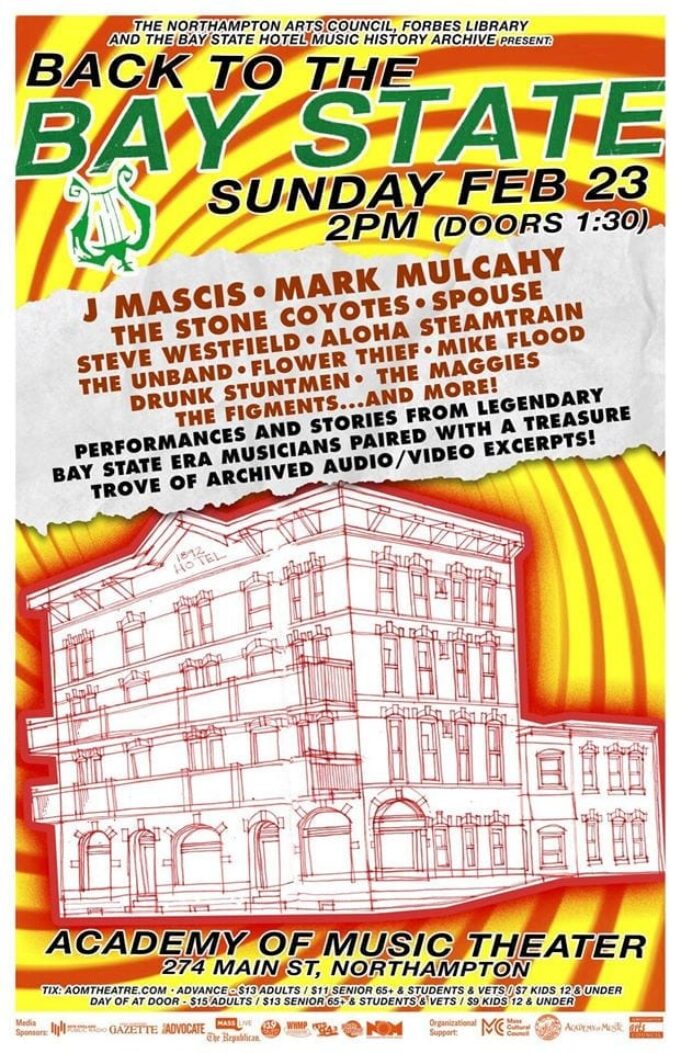 The Academy of Music hosted a throwback night focusing on the roots of the modern music scene in the Pioneer Valley of western Massachusetts. by David Boatwright

The history of the Pioneer Valley Club Scene would make a nice coffee table book someday. Music clubs play a big part in defining the culture of a particular area and its music scene and western Mass is no different. Songs and ideas are exchanged, cultures expressed, friendships, and relationships start, continue and burn-out. And usually, a lot of alcohol is served and consumed, along with tobacco and other smoke-able materials. Buildings rise and fall, not always concurrently with the venues they host.

Back in the mid 70’s the hottest venue in Northampton was the one story brick structure that we know now as Pleasant St. Liquors. That was Lazy River, some three year before Jordi Herold started the mighty Iron Horse. Driving up Rte 47 out of Sunderland today you’d go right by the cape style house at the edge of the tobacco fields where once stood proudly the Rusty Nail, home to ecstatically crowded and sometimes barely attended concerts by James Brown, the Ramones the Average White Band, the Buzzcocks, Fat, Loose Caboose, King Sunny Ade, Yellowman, Toots and the Maytals and many, many others.

So it goes. The Bay State Hotel over on Pearl St. holds a chapter in that book and the Academy of Music in Northampton celebrated it in fine style on Sunday, February 23rd.

At the beginning if the 90’s the major spot for the local music scene [at least on the Pleasant/Main St. block] was Sheehan’s Cafe, located across the street from Turn-It-Up. Sheehan’s had a long early 20th Century bar upstairs and classic club room with a size-able stage downstairs. There was lots of room to hang out, party and flex your listening, socializing, playing and drinking chops. I don’t know the backstory, but suddenly as 1992 came to a close, so did Sheehan’s. It was sad to lose the historic architecture and equally disruptive for the local music scene which was gaining national recognition as a possible East Coast counterpart to the Seattle led barrage of “grunge” bands like Nirvana and Pearl Jam. Sheehan’s had hosted Jazz nights with saxophonist Marion Brown, a long residency by the Chicago blues artist Kenny Johnson, early Pixies and Phish gigs and many, many sets of local music. Now it was gone.

But anyone who’s jobbed as a musician can tell you, adaptability is as necessary a part of the player’s tool kit as nine volt batteries. Local band leader/raconteur Mal Thursday [not his real name] brainstormed a new heart for the scene. Thus was born “the Bay State Cabaret.”

Not for the first or last time would an astonishingly unlikely establishment be transformed into a Rock n’ Roll mecca and cultural icon. Rock history fans will recall that the legendary club CBGB’s in the Bowery section of New York was, as it’s name implied, a much less known venue featuring, Country, Blues and Bluegrass before it became home to the Ramones, Blondie and all bands Punk.

In the early 90’s the Bay State Hotel to me was the creepy place you walked a little faster by on your way to shows at Pearl St, the concert venue fashioned out of the former Shim Gum Do Karate temple in the early 80’s. Even for a fairly experienced bar customer like myself, the Bay State exuded that repulsive yet fascinating “Abandon All Hope, Ye That Enter Here” vibe that the best dives exude.

But Mal Thursday had a vision, and time has rewarded that vision with a somewhat legendary status in the story of Western Mass. Rock n’ Roll. With a grant from the Arts Council Mal began to book up and coming and already legendary acts into the room, and they took their places in the crowded schedule right alongside Pioneer Valley journeymen and novice start-ups.

On a blustery December ’92 day I remember standing in front of the recently closed Sheehan’s with Lonesome Brothers Ray Mason and Jim Armenti and contemplating the future of “the scene.” January ’93 brought the beginning of the Clinton administration and the start of Mal’s” Bay State Cabaret.” The Bay State became a major hang-out spot for the rest of the 90’s and into the new millennium.

Bands who were drawing attention all over the world could be playing in a space not unlike your living room. I personally remember catching sets by Morphine, a trio that featured saxophone, drums, vocals and a bass player with only an A and D string. Even more bizarre was the Royal Trux which featured a sit down guitarist and a girl singer whose eyes remained covered by long blonde bangs that she somehow managed to chain smoke cigarettes through! Then there was Blonde Redhead, a headliner of Thursday-produced Northampton Music Festival that featured three Asian girls, none of whom were Blonde or Redhead.

The local bands were just as freaky, all manifestations of the musical future foretold in 1966 by Frank Zappa on his Mothers of Invention “Freak Out” LP. So, here at the Academy of Music the Back to the Bay State show presented a retrospective of this decade of dizzy downbeats.

That the show ran for four hours and never hit a rough patch is testament to the talent on hand and the care that went into the planning and execution.

Mark Mulcahy of New Haven, Ct. group Miracle Legion opened the show with a short acoustic set. The Stone Coyotes added a second guitar to their hard rocking trio and delivered a hard rocking set of Barbara Keith originals. The first time I heard the Coyotes was late 80’s at Wendell Old Home Days. They are still rockin’, still great!

The last, and loudest sets were saved for last. J Mascis led a fluid line-up of Gobblehoof which included drummer Pat Murphy and bassist Lou Barlow from Valley Alt-rock heroes Dinosaur, Jr. to kick it up several decibels and rile up the crowd for the chaotically loud and rocking Unband. Calling the audience out of their seats, the Uner’s loosened up the crowd for the drive home with a double shot of rock adrenaline, just like we used to get at the good ol’ Bay State.