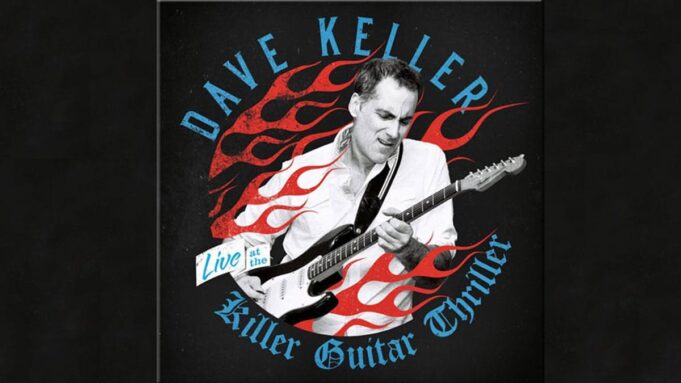 Live at the Killer Guitar Thriller! on Tastee-Tone Records

Dave Keller shows why he is considered one of the finest blues and soul musicians of his generation with this thrilling set of originals and fan favorites. This week he starts a tour of the Southeast to bring his music to the people!

A two-time Blues Music Award nominee for Best Soul Blues Album, Keller’s previous recording, Every Soul’s a Star (Catfood Records) earned a rare 4-star review in Downbeat, and was chosen as one of the Best Albums of 2019. Elmore has called Keller, “a magnificent soul singer,” and Living Blues has called Keller’s music “moving and powerful,” raving about his “Steve Cropper-like riffs and soaring vocals,” “songwriting genius,” and “straight-to-the-heart soul.”

Now, with the release of Live at the Killer Guitar Thriller, Keller brings the listener even closer. 100% raw. Recorded live to one stereo microphone, placed 20 feet out in the crowd, to capture the feeling of being there. The band stripped down to just the essentials: guitar, bass and drums.

And what a show it was! Keller and company headlined the Killer Guitar Thriller, an afternoon of guitar-driven blues and soul put on by the Bucks County Blues Society. The venue – an old school VFW hall on the outskirts of Philadelphia – was filled with diehard blues and soul fans. Alex Budney, bassist extraordinaire, completely crushed it. Rich, deep sound. Drive to spare. And Jay Gleason, Keller’s original drummer from back in ’96, who rejoined the band two years ago, shows why he’s considered one of the finest and funkiest drummers out there. (Trivia: Gleason was John Nemeth’s drummer in Idaho in the early 90s.)

You can hear the three musicians all vibing together, having fun. The intensity and dynamics really come across; the sound is full and rich. And unlike a pristine board recording, the crowd is as much a part of the recording as the band. You can hear them hollering and screaming, giving the band plenty of energy to feed off of.

The album serves as an excellent introduction to Keller’s music, including four songs from Every Soul’s a Star (2018), and a pair each from Right Back Atcha (2016), Soul Changes (2013), and Where I’m Coming From (2012). Plus, for diehard fans, there are five songs which Keller has never recorded before: four heavy blues (Albert King, Bobby ‘Blue’ Bland, Sonny Boy Williamson, and Magic Sam), and a zydeco romp (Clifton Chenier).

Keller has performed at the largest blues festivals in the Northeast (North Atlantic Blues Fest – 3x, Discover Jazz Fest – 7x, PA Blues Fest), and many of the finest blues clubs in the U.S., including B.B. King’s in Memphis, and Biscuits and Blues in San Francisco. Based in Vermont, Keller’s 2020 tours include the Southeastern U.S. (March), Europe (April), and the Midwest (June).

In addition to his own recordings, Keller has recorded and co-written with legendary guitarist Ronnie Earl (2010’s BMA-nominated Living In The Light). He tours regularly with Mississippi soul/blues master Johnny Rawls. Mentored by the late deep soul singer, Mighty Sam McClain, Keller continues to prove McClain’s words: “He’s for REAL!!”