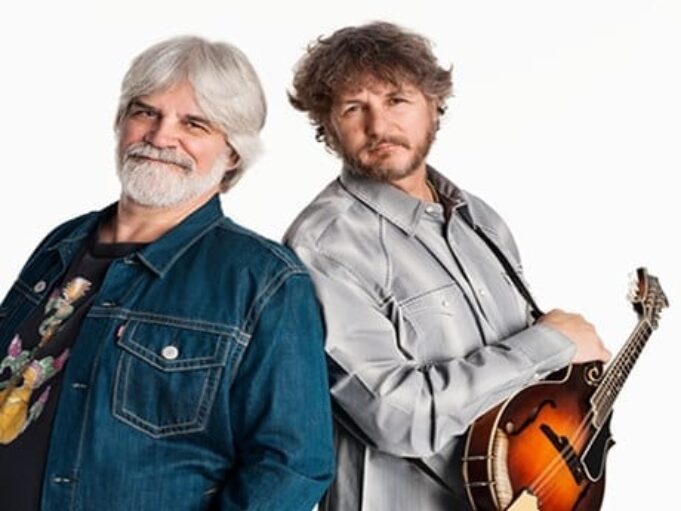 First coming together on a late October evening in 1989 when Vince Herman wandered into the Walrus Saloon in Boulder, Colorado, after being enticed by a sign reading “Bluegrass Music Here Tonight,” and met Drew Emmitt, whose band was playing that night, the pair have been reshaping the musical landscape ever since. First at house parties and the campgrounds at festivals, then in Emmitt’s bluegrass outfit the Left Hand String Band, before coming together and forming the legendary roots band Leftover Salmon on New Years Eve thirty years ago.

Since then, these two have been blazing new musical paths with Leftover Salmon, taking the music at their core, rock ‘n’ roll, folk, bluegrass, Cajun, soul, zydeco, jazz and blues, and crafting it into something new that has spawned a legion of bands in their wake. With their unpredictable approach in a live setting, their willingness to take chances by fusing disparate musical styles together and their incorporation of non-traditional bluegrass covers into their repertoire, Leftover Salmon has pushed that progressive bluegrass sound they were originally influenced by to the next level. Instead they are firmly settled in the long lineage of bands that defy simple categorization, always setting their own musical agenda.

NPR’s Mountain Stage says, “One of the most fun-loving bands you’ll encounter, Leftover Salmon has built a fervent audience with an insatiable thirst for living, and re-living, its energetic live performances,” while Offbeat calls them, “One of the most spirited, jovial bands of the jam band nation.”

The two long-time collaborators are hitting the road for a rare run of acoustic-duo shows performed in intimate settings that will celebrate over thirty years of musical friendship. Each night will be a journey through the pair’s long history and touch on all realms of their vast musical catalog including everything from well-known favorites to long-forgotten gems, and everything in between.

Jimmy Herring (Aquarium Rescue Unit, Widespread Panic) says of them “When I look at Drew and Vince I just smile every time I see them play. I just love those guys. They have carved out a special niche with what they do in this world.” [to Tim Newby in his book Leftover Salmon: Thirty Years of Festival!].

A bit of Leftover Salmon History:

With early beginnings in Colorado in 1989, Leftover Salmon has certainly made some moves over the years. In 1990 they appeared with Former President Jimmy Carter at a charity benefit in Colorado. They had a spot on H.O.R.D.E. in 1997 and Neil Young sat in while in New Jersey(Calling them his favorite band, along with Primus, from the tour that year). They have celebrated Independence Day at Red Rocks with Blues Traveler multiple times from 1997 to 2019, and have performed at Red Rocks 12 times throughout the years.

In 1999 they put out The Nashville Sessions with notable guests Waylon Jennings and Earl Scruggs among others and they revisited it 15 years later at The Ryman Auditorium with many of the same guest artists as were on the album including Sam Bush and Taj Mahal, with additions of Col. Bruce Hampton, John Bell, and others. They’ve appeared four times on NPR’s Mountain Stage, have performed at AmericanaFest, IBMA World of Bluegrass, and eTown, among others.

They have also has a bit of TV time as a host band of six episodes of Season 6 of Deadliest Catch’s wrap-up show After the Catch, had songs on the soundtrack to legendary ski and snowboard filmmaker Warren Miller’s movie Snowriders 2, and also had a cameo on Your Pretty Face is Going to Hell on Adult Swim on the Cartoon Network.

Leftover Salmon is showing no signs of slowing down and their most recent album, Something Higher (released in 2018), has been universally hailed as one of the band’s finest releases. Something Higher shows how even upon preparing to enter their fourth decade Leftover Salmon is proving it possible to recreate themselves without changing who they are. Billboard writes, “By blending so many elements of two-step, rock ‘n’ roll, bluegrass and more, they’re able to repeatedly maintain a fresh sound, no matter how many years pass.”

The set will also include bonus tracks and previously unreleased music and a 24-page full color booklet all contained in a custom cigarette style box with matte finish and magnetic closure with hand-drawn art by Gary Houston. Each set is signed and numbered by Drew Emmitt and Vince Herman.

Drop us a line at [email protected] with your live music news or show reviews.