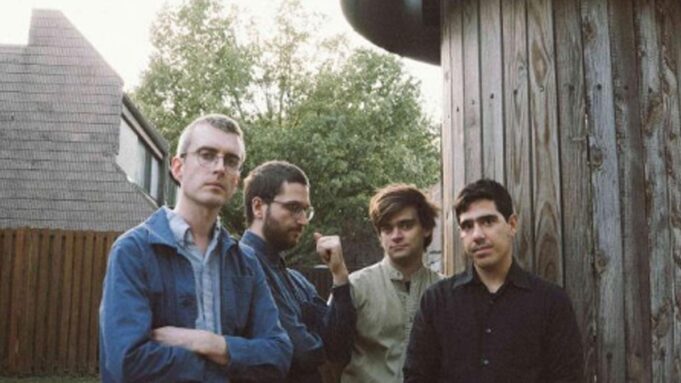 New Album out March 13th, The Common Task plus tour dates in the US and Europe.

Horse Lords make music for the liberation of mind and body. Propulsive in a way that inspires movement and that’s felt in the gut, the Baltimore quartet’s new album The Common Task points to a utopian, modernist ideal. The group’s use of algorithmic composition techniques, microtonal harmonies, and plentifully deployed polyrhythm aren’t secondary to the music’s danceability and rhapsodic swirl, but integral to the party itself.

The Common Task is both the most cohesive and farthest-reaching record Horse Lords has released. A mystifying density of ideas collide at each moment, recalling as diverse a cohort as The Ex and Glenn Branca to raucous Saharan guitar music, Albert Ayler, and James Tenney. It integrates experiments that gestated in the group’s cassette-only mixtape series, which saw the band stretching out on extended compositions and more expansive sonic parameters as well as presenting more explicitly political material, while retaining the immediacy of their long players. As evidenced by the album’s title, as well as songs like “Fanfare for Effective Freedom” and “People’s Park,” the band’s penchant for radical politics is especially accentuated on this release. Embedded in the exuberant interplay of guitar and sax, the persistent pulse of bass and drums, are notions of egalitarianism and the subversion of established norms.

“Fanfare for Effective Freedom” augments its slippery 5/8 groove with keyboard runs that seem pried from a Terry Riley album, an apt reference for musicians interested in ecstatic release and sonic emancipation. “Integral Accident,” an 18-minute piece that occupies the album’s entire b-side that features the first sung vocals on a Horse Lords album, was originally composed for a program focused on the concept of “revolution.” Even more than 2016’s Interventions, now a classic of the underground and praised by the New York Times as “live, shivering with energy,” electronic elements have been fully enmeshed into the band’s template, from synthetic treatment of bagpipes on “The Radiant City” to the dub and reggaeton-inspired drum edits and synth pulses of “People’s Park.”

Horse Lords are the Pied Piper of experimental music and radical thought. Their music is unabashedly fun, and experiencing it in a live context is an experience of collective ecstasy, each body moving to its own notion of what the beat may be. That shared experience, the joy of unified flow and motion, allows the ideas typically understood as “difficult” to be more easily absorbed. By using musical forms that point towards new ways of being, thinking, and organizing, by constantly re-evaluating assumptions and compositional systems, Horse Lords provide a model for society at large. By showing just how joyous it can be to imagine new futures and possibilities, by making us dance and howl with each tectonic shift, they show how dazzling the path towards utopia could be.

Drop us a line at [email protected] to share your live music news and show reviews.