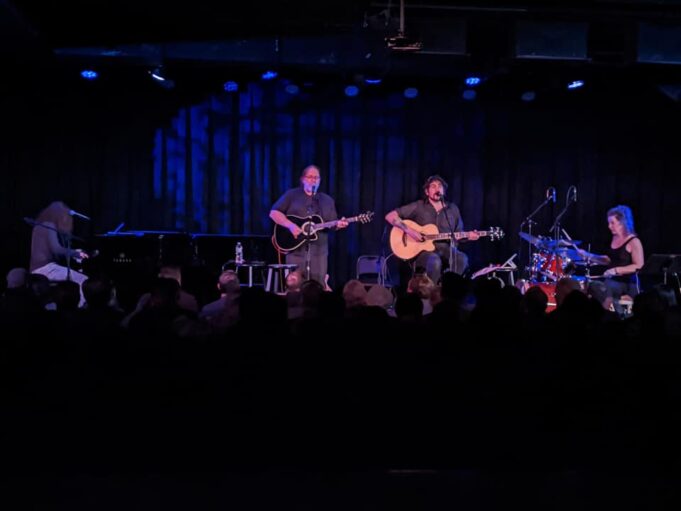 As time marches by and the beloved bands of our youth age (along with ourselves) we are faced with the dilemma: named band, tribute band, or cover band? Each has it’s attractions. We all want to see the “real” musicians, the original guys. Due to death, injury or other interests this may not be possible. Even if the originals are present, time often takes a toll on skills. I find this to be especially true for rocker singing voices, which are often not trained in the first place, delicate, and with age not holding up. On the other hand a Tribute band, holds the promise of fresher bodies, newer energy and if they are good the possibility of re-invigoration of beloved materials.

The Machine – a Pink Floyd tribute band holds up, and for two enthusiastic shows in Natick, MA fulfilled that goal.

The Machine is one of a handful of premiere Pink Floyd tribute bands, playing nearly a hundred shows a year. Typically they put on a big band, projection screen, flashing lights kind of a show. For their 2 nights in Natick, they went a completely different route featuring their acoustic line-up. With TCAN’s more intimate setting, this allowed them and the audience to really focus on the depth of Pink Floyd’s music.

Friday night was an A to Z show. The Machine performed 24 songs (skipping X & Z) with song titles in alphabetical order. The challenge forced them to dig deep into the Pink Floyd catalogue. Saturday night’s show was the entirety of the Wish You Were Here and Animals albums, plus a few extras since the albums are not long. With one exception (Have a Cigar) the shows were completely different sets and many in the audience attended both shows. Both nights shows were two sets and ran well over 2 hours long.

These were two amazing nights of performances. What made the grade is the truly skilled musicianship of the performers. The members of The Machine include founding members Joe Pascarell (guitar, vocals) and Tahrah Cohen (drums), and Dylan Kelehan (bass, vocals, Dylan joined the band in Spring 2019) plus Scott Chasolen (keys, vocals, accordion). This show they had Jon Thompson on tenor sax, soprano sax, baritone sax, flute and acoustic guitar. In addition to having absorbed the source materials, they have the talent and experience to go beyond that which is laid out in the original vinyl. At the opening of each set, Scott Chasolen reached the baby grand piano first and while the other musicians got into place (& fiddled with ear pieces and instruments) Scott opened up the piece with a 2 minute piano solo introduction. It was a wonderful way to introduce the audience to the sophistication, richness & range of Pink Floyd’s music.

The stage layout also had Tahara Cohen’s drum kit off to stage left, but out front, lined up at an equal depth to the other members. She often used a larger padded drum stick – looking more like a timpani mallet – to give a mellow depth to the drum sounds and part from the more traditional crisp rock & roll drumming style. The sax(es) and clarinet were a wonderful addition to The Machine’s typical line-up, filling out the sound and bringing in hints of R&B. A small modern-touch side bonus is that most of the band wore in-ear monitors. In an intimately small venue, the front half of the audience often is hearing the show not thru the speaker mix, but a conglomeration of all of the stage musicians monitors blasting forth. This can result in a muddier sound. With the audience sound actually coming thru the house mix as brought forth by TCAN’s excellent house sound engineer Joe Idzal, the show sounded wonderful. I highly recommend checking out The Machine and look forward to hearing their more hard core electronic music versions of Pink Floyd in the near future.