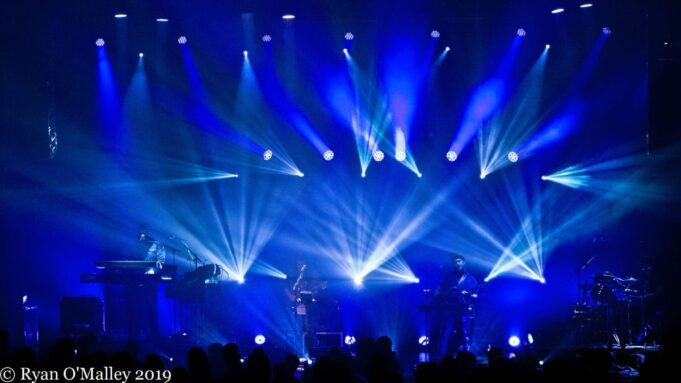 In 2013, bassist Eric Gould – a former and founding member of Particle – put together a new band with a unique twist. Coming from the 90’s and 2000’s jam band explosion, Gould and his new band mates embarked on a journey to pay tribute to three of the biggest influences on today’s jam scene: Pink Floyd, the Talking Heads, and Phish.

Hence the birth of Pink Talking Fish, a hybrid outfit who picks songs from each artists catalogue and intertwines them to deliver an uncanny experience each show. Such was the case this past Friday when the four-piece outfit from New England made its yearly return to the Sherman Theater in Stroudsburg, Pa.

Along for the ride for this show was Steal Your Peach, another hybrid band who pays tribute to the forefathers of the jam scene: the Grateful Dead and the Allman Brothers Band. It was the band’s first appearance at the Sherman Theater, and they did a fine job in getting the crowd warmed up with spirited takes on the Dead’s “Feel Like a Stranger,” and the Brother’s “Ain’t Wasting Time No More,” which served as a two-shot opener to their nearly hour long set. Guitarists and singers Marc Singer and Jimmy McGuigan had wonderful interplay with each other throughout the duration of the set including a tight segue of “In Memory of Elizabeth Reed”>”Help on the Way”>”In Memory of Elizabeth Reed.” After a standard version of the Dead’s “Jack Straw,” the outfit bid farewell with the Allman Brothers typical tease of “Franklin’s Tower” before kicking right into the ABB staple “Blue Sky.”

When it was time for Pink Talking Fish to take the stage, the first set found the band diving into more exploratory spaces as was evident during the opening number of Floyd’s “Pigs (3 Different Ones).” With all members of the band being long-time fans of Phish, it’s no surprise that most songs they do tend to be in the style of the Vermont outfit. More so the band’s take on Phish material may be the best out there, and Friday’s show followed suit with an early run through “Down With Disease.” Guitarist Cal Kehoe, who will soon be celebrating his one-year anniversary with PTF, is a perfect fit to the lineup and brings a huge amount of energy to the performances including his brilliant jamming at the end of “DWD.”

Their first dip into the Talking Heads catalogue, the funky “Slippery People,” kept the crowd on their feet due to the tightness of the band and the outfit teasing parts of the Bee Gees “Staying Alive” and the main riff to the Ghostbusters theme. While forever being viewed as one of the most popular new-wave bands of the last nearly 50 years, the influence the Talking Heads has on the modern jam band scene seems to grow more with each new band. The music is as complicated as it is influential, and luckily bands like Pink Talking Fish are here to do it justice.

Other first set highlights included a trippy take on Floyd’s “Astronomy Domine” leading into the prog-influenced “Sanity” by Phish. As it is every time the band plays the song, the Talking Heads “Crosseyed and Painless” elicited one of the biggest dance parties of the night, with drummer Zack Burwick’s tight percussion leading the charge. A spot-on run through Phish’s “Divided Sky” with Floyd’s “Mother” sandwiched in between brought the set to an energetic close.

The second set featured more jammed out numbers beginning with the Phish opus “Free,” which again featured some fiery guitar work from Kehoe who has clearly studied Trey Anastasio’s playing throughout the years. An extended take on the Heads “Found a Job” was a nice lively tempo change before diving back into the slower material with Floyd’s “Shine on You Crazy Diamond.” Clocking in at almost 14 minutes, PTF jammed out the already long opening of the number before keyboardist Richard James delivered the songs famous verse. James is not to be overlooked in PTF, with a solid understanding of all three bands musicianship he is able to toggle between piano, synthesizer and organ fluently to help give the songs new life while staying true to their original blueprints.

A Phish fan-favorite, “Tube,” meshed into the slower, thumping “Swamp” by the Talking Heads before segueing back into “Tube.” It’s certainly an odd transition with tempos, but the way PTF flawlessly pulls off things like that on a nightly basis is a testament to how well-polished of a machine the outfit really is. Ending the set proper, James lead the band through a take on the Floyd classic “Wish You Were Here” which found the band giving the song a tempo boost during the ending jam.

While the bands’ name implies the three bands that will be the focus of any show, over the years Pink Talking Fish have been known to have other artists music make appearances during their shows: David Bowie, the Grateful Dead and even the Beastie Boys, for example. So it was no surprise that for the encore the band picked a song by a different artist; yet the song is something that has been a favorite of Phish to cover – “Walk Away” by the James Gang. Kehoe lead the number which proved to be the perfect ending to a run night celebrating the music of three legendary acts.

Since forming nearly seven years ago, Pink Talking Fish has blossomed into one of the most respected acts out there. They are a band that has built a career on giving a fresh kick in the ass to music that has constantly been played out the same way for decades, and after Friday’s show in Stroudsburg, there doesn’t appear to be any reason to stop a good thing now.

Drop us a line at [email protected] to submit your live show review or news story.