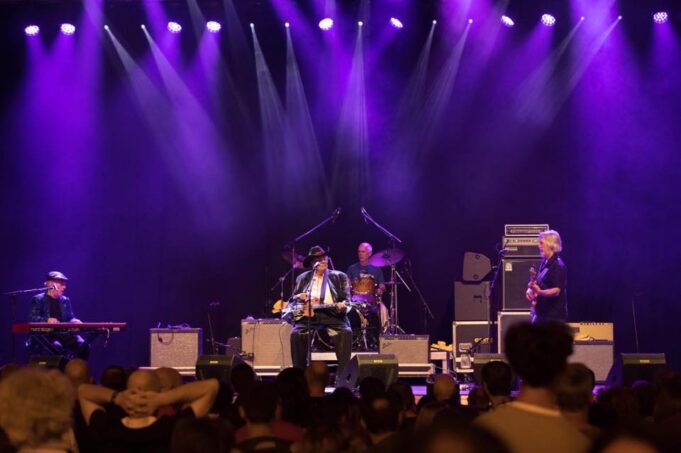 Rockabilly pioneer Sleepy LaBeef – “The Human Jukebox” – has passed away at the age of 84. By Michael Lasalandra

You probably have never heard of him, but you should have. Sleepy was a rockabilly original who came up with Elvis, Jerry Lee Lewis and Carl Perkins, and later recorded for Sun Records, but who just never made it big like they did.

But that didn’t stop him from continuing a career that spanned nearly 60 years, several record labels and earned a devoted cult following. He was still performing up until late last year.

I first encountered Sleepy (he got his nickname as a youth because he had a lazy eye) back in the mid-1970s when I read an article in a local Boston newspaper saying that a noted rockabilly musician had been stranded at Alan’s Truck Stop in Amesbury, Mass., while his bus was being repaired after breaking down on the way to a gig in Maine. While he waited, he was playing at the truck stop’s club nightly.

A friend and I decided to make a pilgrimage. It turned out Sleepy was moored at Alan’s for weeks if not months, and we made the trip regularly. It turned out to be my musical education.

Sleepy and his band of young acolytes played nightly for four or five hours, with sets made up on the spot and consisting of everything from old Jerry Lee classics to Jimmy Reed blues to country weepers like Webb Pierce’s classic drunk-in-my-beer song “There Stands The Glass,” which of course I had never heard of. Sleepy would always tell us who “had the hit on” whatever song he was covering. It made me aware of country music beyond the Everly Brothers and Gram Parsons.

The crowd at Alan’s – some nights it was just a handful of listeners – covered the bases from truck drivers, to cops, to truck stop girls to young hippy types getting their musical educations.

The 6-foot, 6-inch rockabilly giant, with his booming basso profundo and his Scotty Moore licks on his Telecaster, would plow through dozens of songs per night at a breakneck pace, leaving his youthful band scrambling to keep up. If they couldn’t, they’d be fired.

In time, I got to know Sleepy and his family pretty well, and we became friendly, though he could never get his Arkansas drawl to correctly pronounce my name.

He was a true gentleman. He didn’t smoke, drink, swear or take drugs – though he did down at least a dozen cups of coffee a day.

Sleepy eventually got his bus back on the road and continued on his way, though the large local fan base he built up allowed him to call Massachusetts his second home.  In time, his popularity with younger fans allowed him to play clubs other than the shit-kicking roadhouses that he usually played, such as the Hillbilly Ranch in the Combat Zone of Boston or the Blue Star in Saugus. A recording contract with Massachusetts-based Rounder Record helped his popularity some.  I like to think an article I wrote about him in a local newspaper helped a bit.

Clubs he later played regularly included Johnny D’s in Somerville, the Inn Square Men’s Club in Cambridge and others on the more youth-oriented scene. When he played those clubs, he typically would focus on upbeat rockers like “Whole Lotta Shakin Goin’ On” or “Hello Josephine” or his own regional 1950s hit  “Tore Up.”

Gigs at the shit-kicking clubs were heavy on country weepers, which I came to prefer as I didn’t know much about them.

Sleepy was said to know 6,000 songs, though he would deny it, and often played 300 nights a year. His wife, Linda, often accompanied him on the road.

The last time I saw him was at Johnny D’s on his 80th birthday. He had undergone heart bypass surgery earlier and was pretty frail. He could still sing and and play but had to take plenty of breaks. However, any time a break was needed there was a local musical legend in the crowd who would come up and front the band for a few songs.

I had a feeling that would be the last time I would see him and that turned out to be true. When I greeted him upon entering the club that night he of course butchered my name. We always had a good laugh over that.

So another musical giant is gone.I feel privileged to have enjoyed his music and his company on dozens of occasions.  Thank you Sleepy.