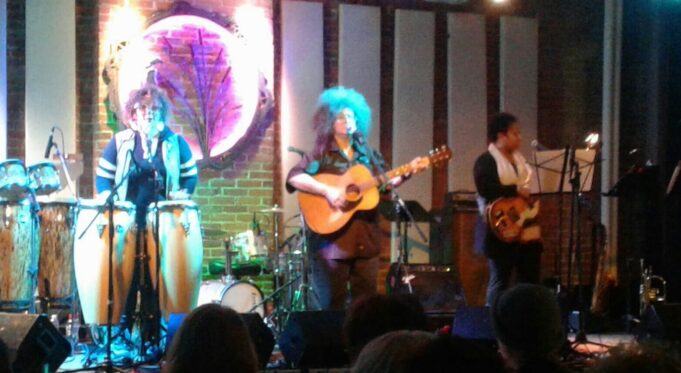 I wish I could go with something other than obvious, but these are just my first thoughts. Pamela Means is certainly an Artist (capital ‘A’) who will bear further recon missions; that much is apparent with just the first couple of numbers that she performed in Greenfield on this night just before the holidays.

So, here is an observation of the obvious type: Pamela Means plays Acoustic/World/Soul music, with a sound that is rootsy but more in the African sense than any Americana sense. Joan Armatrading comes to mind, of course, but with songwriting and playing á la Bruce Cockburn. The lyrics are entirely topical, and the music is highly rhythmic with appropriate displays of technique without making the riffs the point of the songs that Means performs.

This same understated playing rings true of the trio as a whole. Means wisely and fortuitously tapped the talents of Rebirth Band’s I-Shea Iréne Shaikly and Cinnamon Blair not too long ago; the three are clearly in sync both musically and with their shared philosophy.

This is my favorite kind of music: this is Good Stuff. This is Art, this is Real, this is Real Art and Important Music. There is substance here, satisfying to the soul in a personal way and on a primal level, and it satisfied on a communal level, too. This is Real. EVERYone should be exposed to this music, for the groove and for the truth in the lyrics. Pamea Means is supplying entertainment and enlightenment together in one package- remember when that was what music was really all about?

It is entirely likely that any attempt to quote/unquote ‘categorize’ a band’s music belies a frame of reference stemming more from the writer’s small-town, white-bred origins than any real conveyance of actual genre. It’s all opening up, an increasing, ongong, evolution of beyond-boundary, non-genre music, as widely appealing as it is substantial- with such ‘substance’ being publicly personal, as well as decidedly danceable and transcendentally spiritual.

The last time we caught Soul Magnets- was it like a year ago now? -they were tight, clean, energetic, professional, and totally soulful. All that is true tonight, maybe even more so, if such is possible; but they also come packing a greater proportion of originals. These are strategically interspersed throughout the setlist, but they could stack ’em all up together and it wouldn’t make much difference to the folks dancing here tonight. The groove is consistent throughout the show.

Now, with a name like Hawks & Reed Performing Arts Center, we might not expect the place to turn into a dance club. There’s no way it couldn’t, though- not with this kind of funk-infused Motown. The originals are no fewer as the night goes along, and neither are the bodies in motion. Other than dancing, there is so much to like about this band.

There’s plenty of good reason to see Soul Magnets… Nine of ’em right up on the stage there. The two singers front a full complement, with three pieces of brass and a full percussionist besides the guitar, bass and drums. This is supremely well-performed, exquisitely executed material. Even rock-snobs would be hard pressed to find fault with Soul Magnets.

Between the playing and singing, the sound and atmosphere in the room, and the song selection throughout, we can’t be blamed for feeling like we’re in a Las Vegas or Chicago hot spot. Soul Magnets should play out every damn night of the week; it’s a shame for anybody who are not turned on to them yet. Get out and go see them!