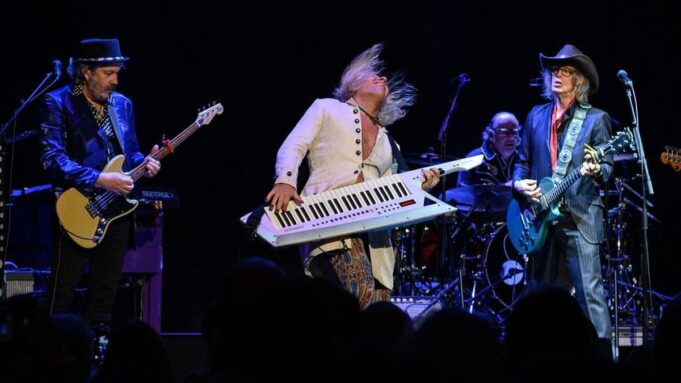 The Waterboys at the Belasco 10.15.2019 by Michelle Nati and Stevo Rood

The Waterboys are one of the few bands who can make a venue of any size feel intimate, as they did LA’s Belasco on October 15. Replete in Stetson hat and suit, Waterboys frontman Mike Scott led the band in a lively show that makes it hard to believe that so much time has passed since the band debuted in 1983.

While the band members aren’t the same as they were in the 80s (Karl Wallinger has long since departed for World Party), the songs indeed hold up, and the current lineup more than does them justice. Scott is a powerhouse performer who kept the audience entertained throughout both sets with stories of song origins, performances, and his experiences on the road. Keeping up with Scott step for step was fiddle and mandolin player Steve Wickham, who was not only wonderful to listen to but watch as he twirled with reckless abandon during his solos.

The Boys paid homage to Clash and Big Audio Dynamite member Mick Jones with “London Mick” from their latest album, Where the Action Is.  They even gave the nod to the KISS Army between songs and just before  “Nashville, Tennessee,” a song in which Scott declares, “my soul is in Memphis but my ass is in Nashville, Tennessee.”

The Waterboys played much of their newer material throughout the set, but it was the classics the audience came for: “A Girl Called Johnny” and of course, “Whole Of The Moon” among them. “Fisherman’s Blues,” however, was the highlight of the night. Released thirty years ago to the day,  it had the crowd swaying and singing with cell phones in the air in hopes of capturing a moment of this timeless classic which, while nostalgic, sounds as fresh as the day it was released.

Man, What a Woman
Rosalind (You Married the Wrong Guy)
Blues for Baker
We Will Not Be Lovers
If the Answer Is Yeah
Nearest Thing to Hip
November Tale
Morning Came Too Soon
In My Time on Earth

Encore
The Whole of the Moon

Drop us a line at [email protected] with your review or story idea.