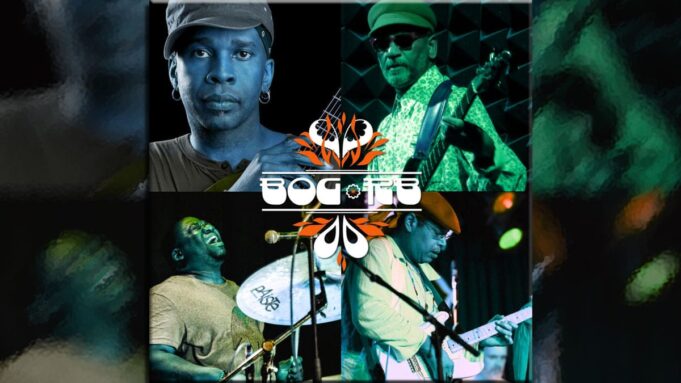 The first East Coast tour for this band that is lovingly interpreting the music of Jimi Hendrix’ historic Band of Gypsys is about to begin. “We’re not doing recreations. We’re doing explorations.”

Catching up with Vernon Reid months ago we spoke about this project. He said that there are many cats out there who are doing note for note recreations of Hendrix, and they are all great- but that this band would not be about recreation, rather about an exploration of of the music by the highest quality musicians. “We are not going to play a note-for-note recreation of the Band Of Gypsys, but reinterpret it from an improvisational viewpoint.”

Vernon Reid, “I’d like folks to know that although this group was freshly assembled for this limited-time project, we’ve all played with each other over the years in bands such as The Yohimbe Brothers, Burnt Sugar the Arkestra Chamber, and at various special events in the New York area and these are some of my favorite musicians to jam with.”

Back in the mid 1990s, I think it was likely 1996 the annual Bumbershoot festival was gripping Seattle with concerts in dozens of locations. The main stadium paid host to a Jimi Hendrix tribute that was hosted by Vernon Reid. Over the course of several hours the show featured the Wilsons from Heart, members of Parliament and nearly every quality musician that was at the festival that day. That was my first person viewing of the effect that this music was having on Reid and this band seems to be another outlet for that love over two decades later.

The band refers to themselves as ‘limited edition’ and that is hard to argue. They did a run in the Fall of 2018 on the West Coast, and this is the first significant run in the East.

Jared Michael Nickerson studied at the New England Conservatory of Music back in the Seventies. His long career has included touring & recording with Charlie Musselwhite, England’s The The, Freedy Johnston and The Yohimbe Brothers with Vernon Reid and DJ Logic.  Jared currently co-leads, along with noted writer/critic Greg Tate, Burnt Sugar The Arkestra Chamber out of New York.

Hailing from Philadelphia James Biscuit Rouse anchors the rhythm section on drums. In addition to his prowess on the drums, Rouse has carved out a nice niche for himself as a singer. “When I was a kid and I sang, the way people cried and the attention I received… I knew I loved performing,” Soultracks.com says this about Rouse, “James “Biscuit” Rouse has become a go-to drummer for some of soul music’s greatest artists, including Nile Rogers and Chic, Ray Chew, Stevie Wonder, Chaka Khan, Pharrell Williams, Usher and Lauryn Hill.

Vernon Reid took the world by storm as a founding member of the band Living Colour. The band gained attention for their mix of soul, funk and heavy metal and their album “Vivid” which was released in 1988 on Epic Records hit #6 on the Billboard Charts, due in large part to the immense popularity of the single “Cult of Personality.” The followup,
Time’s Up” garnered the band a Grammy award. He later went on to for Yohimbe Brothers with DJ Logic and a host of others. The band is described as “a very potent blend of hip-hop, electronica, circus music, blues/soul, dub/reggae, with full-tilt rock & roll.”

These four incredibly talented musicians are coming together to perform the music of the legendary Jimi Hendrix from the Band of Gypsys time period. Band of Gypsys is a live album by Jimi Hendrix and the first without his original group, the Jimi Hendrix Experience. It was recorded on January 1, 1970, at the Fillmore East in New York City with Billy Cox on bass and Buddy Miles on drums, frequently referred to as the Band of Gypsys. The album mixes funk and rhythm and blues elements with hard rock and jamming, an approach which later became the basis of funk rock. It contains previously unreleased songs and was the last full-length Hendrix album released before his death.

Drop us a line at [email protected] with your reviews and stories.