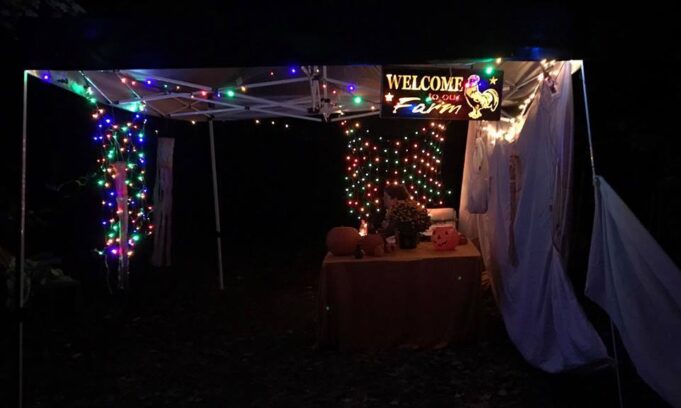 The morning dawned bright and beautiful for the tenth Old 78 Farm Fall festival. In a stroke of great luck the foliage was exploding in color in the most magnificent fashion: possibly more than in the last decade.

Gates opened at eleven am and people began streaming onto the concert field. Located in the bucolic town of Warwick MA, nestled up on the border with New Hampshire and not far from the Vermont border, the Old 78 Farm Fall festival was both near and far from everything.

First up on the Warwick stage was regional troubadour jazz band Lunar Carnival. Kat Alexander fronts the band on vocals and guitar, Dan Grip on upright bass, Chris Trevethan on drums, and Steve Yarbro on clarinet and various wind instruments, and Wendel was guest on guitar. The great thing about the band is that they sound like no one else, and their combination of styles with Alexander’s vocals are just plain fascinating.


First up on the downhill stage was Athol MA band Whalom Park. They are truly local and brought a nice crowd who cheered them on throughout the set. I had seen their appearance at the Strangecreek Battle of the Bands back in spring and they had vastly improved since then, developing their songs and their style quite considerably in the ensuing time. They were exuberant about the experience too, which is always something I like to see in a band at a festival.


Next up were Boston’s rock upstarts the Quins. This four-piece is super fun with both great vocal harmonies and a look that makes you wonder if they’ve busted up any hotel rooms along the way. It’s a real throwback to when rock and roll was rock and roll with blaring guitars, driving rhythm, swagger and attitude. You just want to have a night of heavy drinking with them.

Big kudos to guys like Gerry Desrosiers who go to festivals like this and audio and video tape for the whole day or weekend and then spend their free time mixing and uploading and making it available for all of us to enjoy.  Thanks Gerry!

Full show audio of the Quins

Back up on the Warwick Stage, Portland Maine’s rock duo Muddy Ruckus threatened to steal the whole show with nearly every song. Ryan Flaherty on guitar and vocals and Erika Stahl on vocals and drums make for an amazing band and their style blends roots, rock and blues in a vehicle that allows them to emote at every turn. Throughout the day people approached me to talk about how much they loved Muddy Ruckus.

Old 78 family band Rebel Alliance from Northwestern MA brought their roots-rock-reggae vibe. Those who know are not surprised that the drummer is Mike Wood and the singer and guitar player are Mike Wood, and they are not the same person. I met the new bass player, a great guy named Glenn, but I never met the new lead guitar player whose licks were as slick as one might expect from Rebel Alliance, Whitney Suters. Steve Benson sat in as guest mandolin player on a couple of songs.

Muddy Ruckus came back for another set on the uphill stage as the afternoon was turning into evening. Their turn with an a capella song illustrated their ability to diversify their sound even within just being a two-piece band. It was easy to be overwhelmed by the bursting colors of Fall that was the backdrop of the band as the sun was starting to set.

The Medicinal Purpose came next on the larger downhill stage. The band had appeared at the festival last year and came back with their full arsenal of blues rock power. But they brought a secret weapon with them, too- recent addition Nate ‘Outer Stylie’ Martel brings his immense talent on guitar and vocals. Martel has appeared at Old 78 several times already all the way back more than six years ago when he appeared with the band Orange Television. He came back a few years later with his band Outer Stylie, and now with Brother Sal and the Medicinal Purpose.

This band is great, hard rocking with equal parts blues and rock and roll. Both vocalists are strong, with Sal’s vocals full of grit and gravel, and Martel’s vocals filled with nuance and emotion. They rocked out their entire hour and the interplay between the band and the audience was palpable.

Throughout the festival, friends old and new hugged, chatted, and ate the delicious food cooked on premises. Omnivores chowed down on championship BBQ from “I’m a Hog for Que, Baby!”, turkey chili, and chicken tacos. Vegetarians were taken care of too, with homemade vegan squash soup, veggie chili, cheese fries, and more. And don’t think we’re not going to talk about Grandma Lynn’s famous baked goods: Old 78 is known for her apple and blueberry pies, but this time around she brought a bushel of peaches up from North Carolina and made a spectacular peach crisp.

It was easily the biggest crowd the property had ever seen and the vibe of fun, sweet relaxation was noticeable. One festivalgoer who had never been before mentioned it felt like she stepped into an R. Crumb drawing.

Next up on the Warwick Stage was Long Arm Rex from Boston. They combine elements of reggae, rock and jam in a psychedelic stew that is helmed by Caroline Crawford on vocals (CC to her friends). Guitarist Aaron Darter brings the Phishy jams on guitar with Alexa Stamison on bass and vocals, Jeff Pezzone on drums, and James Peter Allen rounding out the quintet on keyboards.

CC declared their set a ‘rice sandwich’ or something along those lines in deference to their two shorter sets scheduling and giving way to the rice: an American Band set, with whom Long Arm Rex has played many times before.

rice: an American Band took the stage with a fervor. The band opened with Grand Funk Railroad’s “We’re an American Band” and never looked back. The confidence of residing essentially on the property was palpable as the band fired from one song to another, mixing covers and originals, and alternating lead vocals between band members. Kyle Heon helmed the rhythm section on drums, Lauryn Winiarski on bass and vocals, Brian DiMartino (another musician who has played with a ton of bands at this festival including Rhythm Inc, Llama Lasagne, and five years or so as rice) on guitar, Steve Benson on mandolin, pedal steel, vocals, and harmonica, and festival host Phil Simon on guitar and vocals.

The rice set really ushered in the night time portion of the festival and somehow suddenly the stage was alight with festive color. The bonfire was roaring as the temperature plummeted but rice kept the crowd moving. They premiered a new original, a song about alien abduction on a farm filled with chickens (a nod to the host property perhaps) alongside other originals and covers of songs by Warren Zevon, Blues Traveler, Cage the Elephant, and more. The band seemed to be in a stage of euphoria as the festival reached a new plateau during their set.

Long Arm Rex took another turn on the uphill Warwick stage and kept the party moving. They fired through another short set and topped it off with an encore of sorts when the crowd wouldn’t let them go. “Clint Eastwood” by Gorillaz is a staple for the band and somehow brought the crowd together even more.

Last up on the downhill stage was the festival’s headliner, Start Making Sense – a tribute to Talking Heads. By this point the temperatures had really sunk, probably dropping 25 degrees in a few hours and plumes of steam were coming off of the singers as the crowd went crazy. Start Making Sense showed everyone why they are the number one tribute to Talking Heads in America firing through the hits and the back catalog with equal skill. Lead singer / guitarist Jon Braun commented with even keeled sarcasm “I feel like an action figure right now, Arctic Trek David Byrne.” The colder temperatures did not deter the band even remotely as they threw down easily ninety minutes of incredible music to the joy of the crowd.

Thanks to Evan Strumar for the video!

After their set festival hosts Angel and Phil Simon took to the stage and summed up everyone’s feelings of the day from appreciation to nostalgia. Out of nowhere a couple appeared and were instantly married in front of the audience which had yet to disperse. During the remarks, somehow everyone was declared married to each other.

Mike ‘Woody’ Wood from Rebel Alliance put together a super jam that lasted late into the night while revelers alternated between the stage and the fire to stay warm. But Old 78 festivarians can stay warm for a long while with the warm memories that were established on that day and in the ten years of this festival.