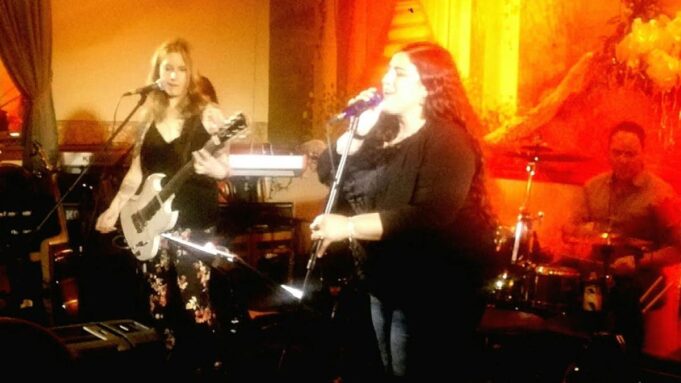 Crazy On You is one of only a few Tribute Bands that is really ‘worth’ getting out to see: totally top-notch, highly professional, and entirely engaging… in fact, I’m having a hard time figuring which I liked better, the band or the venue- but only because I liked both so much. Figaro’s in Enfield is a bit of a drive for me, but Crazy On You is well worth a little bother.

The last time I’d seen this excellent Heart tribute band was a couple-few years ago. Meanwhile, about a year ago I collected-up Heart’s catalog damn near completely and set about sinking my teeth into the band, in both their 70’s and 80’s configurations. Wow- every number is like, ‘”oh yeah, THAT song!” Kinda like listening to Led Zepplin. The biggest difference between this band and Zeppelin (besides the obvious) is that I don’t already know just about every one of Heart’s songs by… errr, heart.

And now that I have a much better understanding and a whole lot more appreciation for the Wilson sisters et al, I can say with great assurance and confidence that Crazy On You does a great job. I can heartily recommend them to anyone even remotely ‘into’ the original ensemble- or not. This is just good stuff, convincingly conveyed and played rock-solid, tight and clean.

Crazy On You is accustomed to playing some larger venues, casinos and such, they certainly had no trouble filling Figaro’s with their perfectly balanced sound. As for tìhe venue, what a perfect place for this kind of affair- ‘this kind’ being an intimate setting for a concert-caliber show, just for starters. Whether it was Music Manager Christian’s clever genius to arrive at the concept of a ‘dinner theatre’ in the house’s banquet room, or perhaps patriarch {Ernesto} who came up with the classy idea, the room is just the right size and shape for a rock band, a tribute show, a comedy club- pretty much anything they care to book.

Add to that the food feature, and we have ourselves the complete experience, a perfect night out, and all within reasonable hours such as will accommodate any audience. In fact, all ages were represented, with none being any less enthusiastic and appreciative of the effort. And the food… suffice to say, this is a “real restaurant” with quality offerings skillfully prepared. Plenty of entrees, sides and salad, together with every accouterment as expected, were lined up buffet-style along one wall, with cheerful service even up to and past the under-the-wire arrival time of a certain humble scribe. This is the stuff of which great dates are made!

Cassandra Demers emulates Ann Wilson’s beautiful voice beautifully, and nowhere is such sweetness and power combined as exquisitely as on the band’s biggest-ever hit, “These Dreams.”

This and a number of other numbers are nicely introduced one or the other not-Wilson, and the band quips along cheerfully, adding a few cracks and laughs. Meredith Robinson, every bit as pretty as sister Nancy, puts on plenty of panache while playing electric and acoustic six-strings, and her command of her featured vocals resound in both tone and sincerity. This was a downright mind-boggling thing to behold, how all the band members and the two front-women speak and sing with such sincerity that one can’t help but feel in synch with their genuine manner. The whole bunch of ’em- they clearly enjoy themselves together.

Lead guitarist Kevin Prefontaine calls up all the smoothness of the original Roger Fisher, and Meredith’s chops are as impressive as Howard Lesses- or Nancy’s. Keyboards by Matt Simpson are so delicate, aggressive, malleable and “shiny” that the effect is well beyond merely adequate, and he even adds the perfectly placed flute parts. Derek Waldron plays bass like a pro, adding punch and funk to the low end without ever overstepping his fundamental function, and Mike Bartlett is a madman- but with discipline. Rock-solid like Jim’s Gordon or Keltner or local drummer Jeff Turcotte, and just as sprightly and percussive as the latter- with an energy and even a look hinting at Keith Moon- it comes to mind that it sure would be fun to see this guy with any of his other projects.

The same is true for each of these six virtuosos: their sounds are so perfectly right-on, smooth and skillful that ya wanna see what they do when turned loose on their own.  Come to think of it, the same is true for Figaro’s as well- the sampling offered up tonight, and the very pleasant servers smiling all around the room, all suggest a great dining experience to be had another time, seated in the main dining room and ordering from the house’s dinner menu.

In other words… I’ll be back. This is truth twice-over or more, as I’m already looking forward to dinner on at least one occasion and another table or two in the dinner theatre. The eerience was easily worth the trip for this first-timer.

Totally top-notch, highly professional, and entirely engaging, this is one of only a few tribute bands that is really ‘worth’ getting out to see- Crazy On You amplifies appreciation for the original artist while adding enough of both charm and enthuiasm of their own to advance the experience to a level of entertainment that is doubly satisfying.