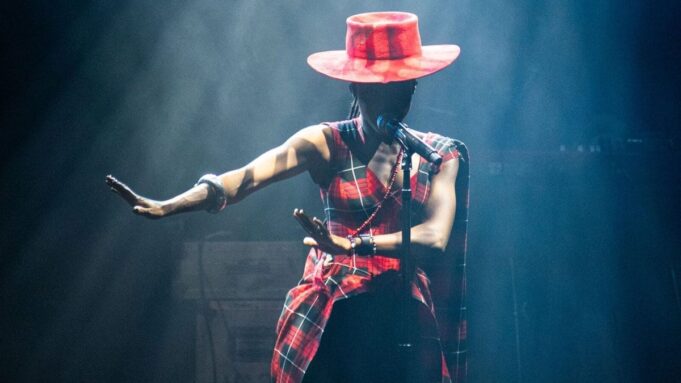 Photos by Stevo Rood and Words by Michelle Nati

In a sold-out show at Los Angeles’ Regent Theater, ’90s trip-hop stalwarts Morcheeba played a laid back yet danceable set to a rapt, eclectic crowd eager to hear the sounds of their youth. Younger audience members who may not have experienced this the first time around, enjoy the walk down memory lane just the same.

The Regent, one of LA’s first movie theaters built at the turn of the last century, was a cozy setting for Morcheeba well-coordinated, intimate set. There were no theatrics, no costume changes, no elaborate light show, and no accompanying artistically-rendered video with an underlying message. Instead, singer Skye Edwards’ sultry but strong vocals held the crowd in sway throughout the night as Morcheeba made its way through songs from various stages in their career from their biggest record, 1998’s Big Calm, to their most recent LP,  Blaze Away.

Aside from Morcheeba’s most well -known songs, among them the ska-infused beats of “Friction” and the laid back vibe of “The Sea,” they brought some surprise covers to the set in the form a funky version of David Bowie’s “Let’s Dance,” and Neil Young’s “Don’t Let It Bring You Down,” which were warmly welcomed by the audience.

There wasn’t much in the way of stage banter with the audience, but Morcheeba nevertheless connected with the crowd as their joy playing music was evident to—and reflected on—the crowd. Tastes have changed since their incarnation over 25 years ago, and the band has seen its share of lineup drama to the point it almost did not exist, but Morcheeba has weathered the storms of the past with grace, subtlety and plenty of chill grooves. As fans, we’re glad they did.

From the video channel of Mark Ibirby

Drop us a line at [email protected] with your live music news, show review, concert memory, or just to say Hi!

And be sure to try the search feature in the upper right- search for your favorite artist, venue, event, or genre, and discover all of the exclusive original content we have spread over thousands of articles.