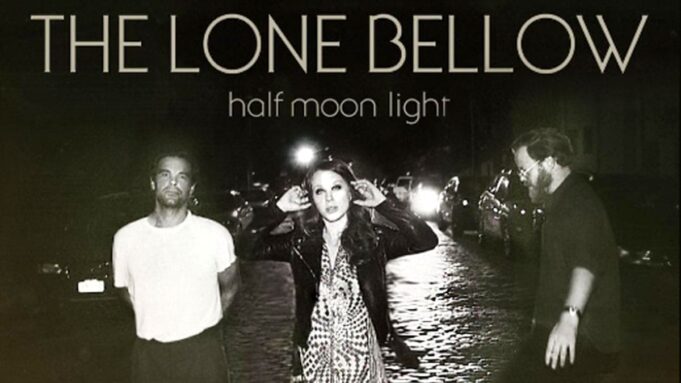 New Album Half Moon Light out February 7, 2020 via Dualtone Records

The Lone Bellow – Zach Williams, Kanene Donehey Pipkin, Brian Elmquist – have announced the release of their long-awaited new album, HALF MOON LIGHT (Dualtone Records, an Entertainment One Company), the band’s fourth studio LP and first one since 2017. Out on Friday, February 7, 2020, HALF MOON LIGHT, produced by Aaron Dessner (The National) at his studio in upstate New York and featuring guitarist Josh Kaufman and drummer J.T. Baites, finds The Lone Bellow more vital than ever as the mighty combo push their acoustic storytelling prowess past new horizons, experimenting with textures and instrumentation to create their most sophisticated work to date. With HALF MOON LIGHT, The Lone Bellow have returned unified and invigorated with boundless ambition. To celebrate the announcement today, the band are sharing their indelible first single, “Count On Me,” a song that reminds us with soul-shouting intensity that it’s safe and important to lean on one another for survival. HALF MOON LIGHT is available for pre-order now.

Williams says: “After singing “Count On Me” together in the studio we walked outside and couldn’t help but think about the sense of camaraderie and kindness that seems to happen at our shows. Like strangers becoming neighbors wrapping their arms ‘round each others necks and saying ‘I got ya.’”

Pre-order features limited-edition gold vinyl and autographed merchandise bundles HALF MOON LIGHT is an artistic triumph worked toward for years, earned not by individual posturing, but by collective determination and natural growth. With earthy three-part harmonies and songwriting as provocative as it is honest, the trio made up of guitarist Elmquist, lead vocalist Williams, and multi-instrumentalist Pipkin creates sparks that make a stranger’s life matter or bring our sense of childlike wonder roaring back. On HALF MOON LIGHT, The Lone Bellow mix light and dark to muster a complex ode to memory, a call for hope, and an exercise in empathy.

“I want it to bring comfort,” Elmquist says. “But it’s not all hard conversations. There’s a lot of light and some dancing that needs to happen…We try to invite as many people into the process to see what we can make together. I like that collaborative spirit and that freedom. Then, the songs speak for themselves.”

That wholehearted embrace of collaboration defines HALF MOON LIGHT. The record marks a return to recording in New York with Dessner, whom the band counts as both a hero and a comrade. “We already had a friendship with Aaron and a strong, shared understanding of our musical vision,” Williams says. “It’s really important to us to be a part of a community of musicians. We like the collaborative, communal way of making something. Aaron showed us a new way of trusting and collaborating. His idea of bringing in Josh and J.T. was such a beautiful gift. The meekness that these friends brought to the table was something that we will never forget. A sense of controlled fury. Lightning in a shoebox.”

“Aaron has a powerful quietness about him,” Pipkin says. “A lot of people I meet in the music industry have lots of bravado, and it’s something I have trouble believing. Aaron doesn’t have that. He is a joy to work with. A true friend.”

For the first time, the band stayed where they recorded, sequestered from the world at Aaron’s studio in upstate New York. They fell asleep at night to the sound of coyotes howling and felt the freedom to fall into rabbit holes that would have otherwise been left unexplored. “We made this record in a place of joy and collaboration with our friends. We were trying to do something bigger than ourselves,” says Elmquist. “I think we’ve been wanting to make this record for a while now. It just hasn’t come together as perfectly as it did this time.”

In support of HALF MOON LIGHT, The Lone Bellow have confirmed a worldwide tour that will begin January 22 in London, England for two nights at the St. Pancras Old Church. North American dates begin February 12 in Los Angeles, CA for two nights at The Troubadour and continue through April 24 with their first-ever headlining show at the Ryman in Nashville, TN. The band will then head to Europe and come back to America for summer festival appearances. For updates and tickets, please visit thelonebellow.com.