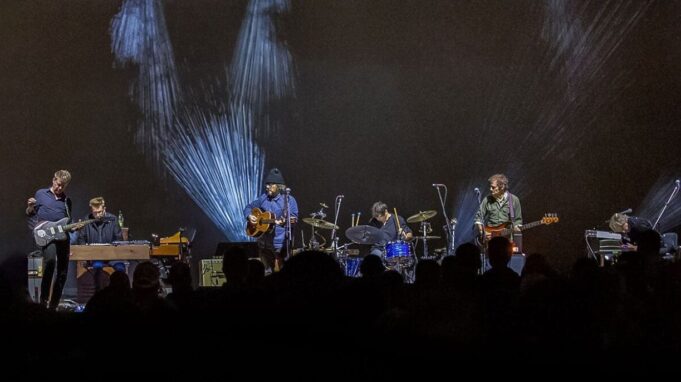 Wilco is out on the road and showcasing their new album, “Ode To Joy.” They performed at Koka Booth Amphitheater in Cary on October 16th in Cary, NC. Under a cool, clear sky filled with stars, they delivered.

Starting off with a solid two songs, “Bright Leaves” and “Before Us,” it was a laid back, folksy Wilco. The songs on the new album are pared down, quietly joyful rides across a starry landscape. And just as they eased the swaying crowd into it, they broke into “I Am Trying to Break Your Heart.” “I am an american aquarium drinker, I assassin down the avenue,” Tweedy sang out into the pines. The crowd was on board — we all assassined down the avenue with him. His falsetto has a restless isolation and loneliness that could cut bone.

Tweedy, behatted in a black toboggan (what do you all call those up north? Knit hats? Touk?), announced he had not been to Cary since they played with Bon Iver (in 2008). “Not sure what came of them.” Later in the show, he capitulated to the crowd, playing “Heavy Metal Drummer” after noting it had just been requested eight times. What’s a Wilco show without some banter with the crowd?

“At Least That’s What She Said” is when Nels Cline started to shine. And with Tweedy and Cline trading solos back and forth, it was a double assault on the auditory cortex. The projection screen behind the band played 60s-style psychedelic images. The vibes were hopeful, even. At the end of the song, Tweedy asked “What were we doing?” as if they both just shot off through the stratosphere and came back down to earth. On their return to this planet, they launched into “Impossible Germany.”

During the other worldly Nels Cline solo on “Impossible Germany,” Tweedy was watching him, grinning ear to ear. It was a sight to behold.

At the end of “Box Full of Letters,” he proclaimed, “we made it through the sad songs everybody, we did it!”

The smell of popcorn permeated the air. Tweedy commented “I smell popcorn” as another, more illicit smell arose from the crowd. “That smells different than it used to. I must have been doing it wrong.”

On “I’m The Man Who Loves You,”Tweedy smiled through the 3-guitar melody as Pat Sansone picked up a guitar and contributed, with Stiratt on bass, Jorgenson on keys, and Kotche on drums driving it forward.

The last song before the encore was “Misunderstood.” I first heard Wilco play this song live in 1997. There was nothing lost in the intervening twenty-two years. This was Wilco resurgent, at once the old Wilco of Being There, the cosmic Wilco of Yankee Hotel Foxtrot and Sky Blue Sky and an entirely new vibe.

“Take care of each other,” Tweedy told the crowd after the last encore, “The Late Greats.” “The best songs will never get sung, the best life never leaves your lungs, so good you will never know…” Oh, we knew. And we knew there was a kernel of hope in the air after all those good vibes rang out over the piney Carolina piedmont.

I Am Trying to Break Your Heart

One and a Half Stars

If I Ever Was a Child

At Least That’s What You Said

I’m the Man Who Loves You

I Got You (At the End of the Century)

Check out the LMNR facebook page here for updates and photo galleries.

Drop us a line and say Hi at [email protected] Consider the Glory! Submit your own review or story.