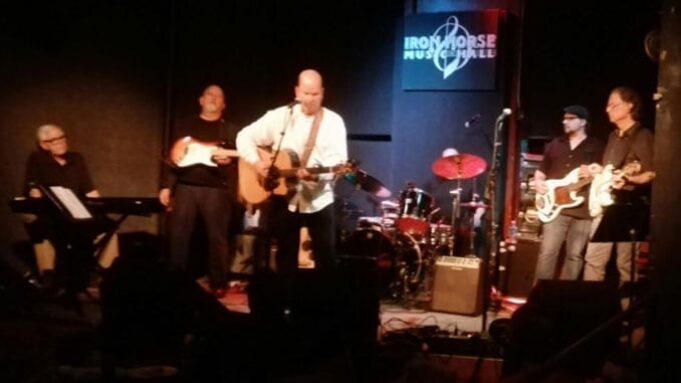 James is ON. Not that he ever isn’t; Mister Montgomery is a pro, a veteran with at least as much seasoning as any of our local pride and joy. Take Peter J for instance, our own Captain Newland brought his Radioexile to open tonight’s show at the Iron Horse- the two of them have been crossing paths for so long, they’ve gotten to be friends. Brothers in blues they are, and when they both come on with harps in hands it makes for a hot time in the ol’ Horse… tonight.

This combination has done this before, right here in this same house; and P and/or J has shown up at shows with the other, but this time there is an energy to it- a bit of extra electricity. That’s how it goes some times, and the lucky suckers who happen to be on hand for such a show… well… we got us a good one going here and we know it. Most of us, anyway. That crew of cacklers up in the loft, I dunno what’s up with them… whatever.

For the rest of us in this near-full house, it’s impossible to tell which side of the reciprocal equation initiates the exchange. It was.  in the air before the music even started, really.  It may have been the band members cavorting get and cajoling, or it might have been the mood that came in off the street. At any rate, as soon as Radioexile picked up their axes. The hoots from all around made it sound like they were already into their set- which contributes to the fire on-stage. And that in turn likely fuels the headliner, as well it should.

Once this ‘up’ atmosphere prevails, it perpetuates. It would take a bomb to bring this good thing down. The players are all pros who can recognize the quality in the air; they feed off it and cycle it right back around. And it doesn’t do any harm at all that the sound in the Iron Horse is always so good.

The opening set was too short, of course. Pete took us all on a romp across his catalog, from what he called a Memphis take on the first song on FAT’s first album from 1970, “House on the Corner.” I gotta tellya, it works! The original album version is so perfect, one might hate to shake up- but if yer gonna mess with it, make sure to mess it nice. So the end result is a singer’s updated version, rather than a ‘cover,’ of a song by another band from long ago.

Radioexile has had a stable line-up for a good long while now, since drummer Tim Smith joined to accompany the fantastic John O’Boyle (in another band at first) to form the area’s most powerful pressure-cooker of a rhythm section. Ralph Whittle has been playing keyboards with Peter J since before some of us were born, and Mark Pappas has been his right-hand more than anyone, as the stalwart guitar-man pretty much always with whatever endeavor Pete is presently engaged in. Even when Pete does a solo show, Mark is like as not to be one of “us” in the audience. Well, at least once I seen him there, anyway.

So the energy was established and the patrons primed when James Montgomery’s band took to the stage- which they did vegas-style, playing the star in with a rollicking instrumental and calling him up with a downright professional intro from bass-man David Hull.

Speaking of bass players, and imminent pro’s, Dave Hull’s skill is montrous, as demonstrated with what might be THE most impressive five minutes of solo-ing since Jaco… or Noelle. As well as adding a flair of emcee-action throughout, the dude even sings a song from his own album, recorded between playing with this feller and Dynamite Johnny… and Aerosmith.

Guitarist George McCain (sp?) is relatively new to the fold, and i heard -and missed- the drummer’s name at least three times. His solo section was what we would call ‘concise,’ which could be seen as too quick for some or mercifully brief to others, depending on which side of that argument one is on.

A couple of Paul Butterfield numbers provided a showcase for the late great bluesman, in tribute to whom James Montgomery has  released his most recent album. This also gives serves as a launching point for a run through a not-overly-long list of other big names in the blues canon, which accomplishes the important and respectful task of both paying homage to the tradition and placing himself in context within it.

The climax to the James Montgomery set turns out to be a rousing round of guitar styling from the newest band member. As the leader counts off a list of Blues guitar greats from old-school to Clapton and Hendrix, the big blonde fellow rips a riff of exemplary replication. The standout among these was a beautiful Wes Montgomery passage, promoting a new interest on the part of at least one humble scribe.

And the ‘other’ climax (yes, this show was that dynamic) had to have been the hopefully anticipated but not obligatory harp “duel-et” that ensued when James called Pete up to the stage. It don’t make no never-mind who the observer/listener is, this is stimulating stuff- the word ‘rousing’ again comes to mind. Even if the audience hadn’t been primed by the opening set from Radioexile; and even if they hadn’t been further revved by the energy of the band at hand; and even if the dynamic performance hadn’t included that awesome guitar tribute, this ten or fifteen minutes would have been enough to justify the price of admission and the bother of finding a parking place. It would even have been worth staying up late for, but with a 7 pm start time, well… we’re all getting a little more civilized as time goes on, are we not…?

Having seen both these bands a number of times, a couple of them recently, it is plenty apparent that they rock, greatly and with a solid sound in both cases. Radioexile covers a couple of genres, as Pete is as much a folk songwriter as a hard-rocking blues-man, but there is not one whiff of incongruity in the flow of the evening. In fact, the impression left after is one of consistency. With both bands rocking hard, solid and smooth and both band-leaders showing a lot of panache- possibly more so than is the norm for either, as each is a fairly civilized ol’ gent- or maybe it’s just maturity rearing its sophisticated head.

Either way, these are a couple of artists and bands with enough common ground that they complement each other superbly. The upbeat and enthusiastic dynamic is casual and professional, wild and disciplined, and -always a great match- loose and tight.