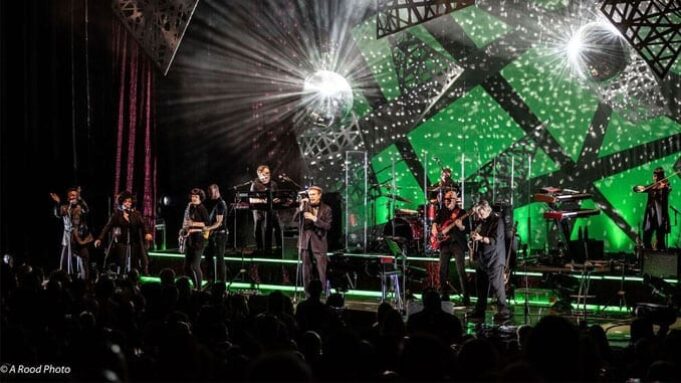 LA’s Greek Theatre was the perfect setting for seeing summer out—unofficially, anyway—as the dashing and dapper Bryan Ferry and his polished 9-piece band performed favorites from his solo albums and Roxy Music’s extensive and well-loved catalog.

Opening the show was Femme Schmidt, a singer-songwriter from Berlin whose ethereal set complimented and prepared the crowd for what was to come.

The former Roxy frontman was magnetic from the moment he hit the stage and started the show with “India,” “The Main Thing,” and “The Space Between” from 1982’s Avalon before moving onto more danceable and well-known later-’80s classics like “Slave To Love,” among others.

To that point, the show was enjoyable and and Ferry’s band more than held their own, but you could feel the audience stop in its tracks when it heard the opening chords to “In Every Dream Home A Heartache.” From that moment on , Ferry held the crowd completely in his sway as he and former Roxy guitarist Chris Spedding launched into a series of Roxy Music classics.

Ferry tackled two covers during the set—“Just Like Tom Thumb’s Blues,” recorded for 2007’s Dylanesque and the Wilbert Harrison penned “Let’s Stick Together,” which he recorded with Roxy Music in 1976. Both songs allowed him to show off his considerable harmonica chops as sax player Jorja Chalmers traded many an effortless riff with Spedding throughout the show and repeatedly nailed Ferry’s signature sound.

The rest of the set had the crowd on it’s collective feet as all but one of  Roxy Music’s albums were sampled. As the show wound down, Ferry, ever elegant and always graceful, put everything he had left into “Love Is The Drug” and “Do The Strand” before taking leave of the stage. There was no encore, although we had so wished there were.