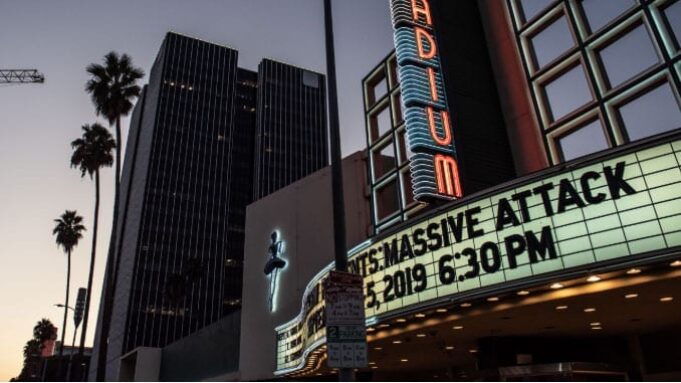 Massive Attack packed LA’s Hollywood Palladium for three nearly sold-out shows in celebration of its 1998 release, Mezzanine, which was performed in its entirety, but it wasn’t just a concert—it was a multi-sensory performance with a timely message. Few bands can take an album that was released over two decades ago and create not only vital concert-going experience for fans, but also a fitting soundtrack to the current cultural and sociopolitical climate. This was due in large part to the accompanying video projections created by documentary filmmaker Adam Curtis with their central themes of data mining, technological and pharmaceutical control, and far-right extremism.

The band didn’t play Mezzanine track-by-track. Instead, Massive Attack sprinkled its set with to-the-letter covers of songs from the likes of The Velvet Underground, The Cure, Bauhaus, and (John Foxx-led) Ultravox played just before the songs that sample them. Grant “Daddy G” Marshall and Robert “3D” Del Naja handled much of the vocal duties, as did guest vocalists reggae great Horace Andy and legendary Cocteau Twins singer Liz Frazer.

It was apparent to the audience that seeing Frazer is a once-in-a-lifetime event, and when she came out to sing “Black Milk” and more notably “Teardrop” (made famous on U.S. shores by the medical drama series House), nearly everyone’s cell phone cameras came out to record the moment. Fraser also sang Pete Seeger’s “Where Have All the Flowers Gone” in darkness from the back of the stage as visions of the war-torn Middle East and political figures such as Trump (to which the audience raised a collective middle finger) and Putin flashed overhead.

3D has referred to this show as a “ghost story,” which is somewhat evident in the music chosen before Massive Attack even takes the stage—all pop hits from 1998 (the year Mezzanine came out) played through what sounds like a distant car radio, but that’s where the nostalgia ends. As the band relayed via the video screen behind its members, “Memories of the Past Cloud Our Vision of the Future.” That is indeed where Massive Attack has set its sights.