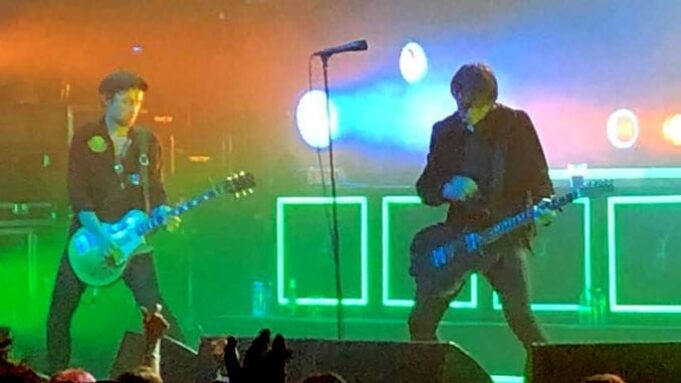 Catfish and the Bottlemen at House of Blues, Boston, June 19, 2019 by Ross Condit

If you haven’t heard of Catfish and the Bottlemen yet, you can be forgiven for about the next minute.

This tremendous band out of Wales has been on the scene since 2007, playing supporting gigs for friends’ bands, doing the “Battle of the Bands” thing, and eventually hitting the festival circuit. In 2014, they released their first album, The Balcony. Propelled by killer singles like “Kathleen,” “Fallout,” and “Cocoon,” the disc hit platinum in the UK. Now, with three outstanding albums under their belts, including 2016’s The Ride (which spawned the hit “Soundcheck”), and the recently released, The Balance, they’re catching fire in the U.S.

These cats tour hard! They’ve been playing gigs across the UK, Europe, and throughout the U.S. almost constantly. On June 19, fortune landed them at Boston’s House of Blues for an 18+ show.

The night was led off by Ohio’s The Worn Flints. To say that this band was a horrible choice is an understatement. As musicians, they were fairly tight. Singer Kenny Stiegele; however, filled the stage with antics straight up stolen from Jack Black’s character in School of Rock (and any other number of movies). Although, they weren’t meant to be funny, they came off as ridiculous. Their music is more to the heavier rock end and was not at all a good fit with Catfish and the Bottlemen’s indie rock vibe. Thankfully, it was a quick set.

As Catfish and the Bottlemen took the stage, the House of Blues crowd exploded. The band wasted no time tearing up the stage, kicking off their set with “Longshot,” their lead single from The Balance. Catfish’s energy level is insane. Their albums are almost tame by comparison. You know how some bands will open with a big song, then make you wait a few more tunes for the love? Not these guys. “Kathleen” came ripping in next, followed immediately by “Soundcheck,” one of their biggest hits on the U.S. charts to date, the crowd’s arms pumping the air the entire time. “Pacifier” gave people’s tired shoulders a short break, but then right back to the fist pumping and singing along with “Twice,” “Fallout,” and most of the rest of the set, which progressed with few slow moments.

I consider a concert to be a living organism. That “show pump” ebbs or flows depending on the band and their desire to hype the audience. Catfish and the Bottlemen’s performance style can best be described as balls to the wall, turn your amps to 11, and keep pushing. Frontman Van McCann frequently mounted the monitors, playing to all parts of the stage and connecting with the crowd. The band is tight, driven by rhythm monsters Benji Blakeway on bass (the bass hits you in the chest the entire show) and drummer Bob Hall. The band is rounded out by lead guitarist, Johnny Bond, who shredded the entire night.

There were no breaks between songs and no drops in the energy as Catfish and the Bottlemen went on a 75-minute romp that didn’t stop until just before their four-song encore set—the only odd part of the evening. McCann’s timing seemed off as he waved goodbye before several songs, making it seem like the band would exit the stage for the night each time, which they never did, despite the darkened stage. The lights quickly came back on and the band launched into “Fluctuate,” then tore through the phenomenal “7,” “Cocoon,” and “Tyrants,” which I had not heard before.

Boston’s House of Blues is a three-floor venue with a large open area as the main concert space with two horseshoe balcony levels. Seeing a show there when the room is half full is a depressing experience. Seeing shows like Catfish and the Bottlemen, when the room is packed human to human, is incredible. The crowd moves as one. They have no choice. This was primarily a college aged crowd and the energy of the room reflected that. This show was all A-game, all the time.

Curious about the band’s name? I was too. Here’s what I’ve got for you: their name is derived from McCann’s first musical memory—a busker from Sydney, Australia nicknamed, “Catfish,” who played bottles—strange but true.

Listen online, download some of their tunes, pick up a CD, or support the vinyl revolution redux. Whatever you do, listen to this band. Even better, do yourselves a favor and see them live. Catfish and the Bottlemen have a handful of summer dates left to play in the U.S. before heading off on the European and Japanese legs of their tour, but they’re back in the U.S. this fall.

Drop us a line at [email protected] with your live music news, show review or concert memory.