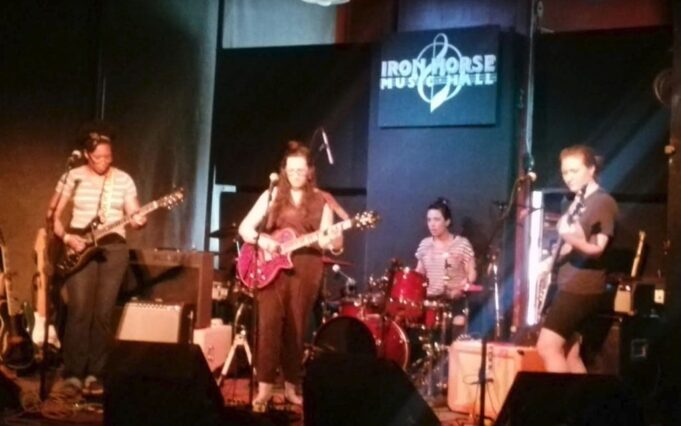 Four songs. Twenty minutes. That’s it. Which is OK for now; there will be other times. One is on the roster in the next week or two  coming up, at Luthier’s as it happens. So, twenty minutes is just about right for getting a feel for this band- you know, to see if I want more. And I do; I do indeed.

EX-Temper plays solid rock, brash with an attitude like punk, but way more advanced in their playing, their songwriting, and their harmonies. If they weren’t enjoying themselves so obviously, I might be tempted to call them something like “four angry young women,” or maybe “four pissed-off chicks;” something to relate an identity and identify the common gender without being stupid or offensive about it.

I like Ex-Temper. I would rather stay on their good side. And one wouldn’t want to stir up trouble in one’s first visit to the Iron Horse in quite some time. A couple of music acts have been enticing me forth from my bedside computer stand lately. Case in point: Kaliis Smith.

This is my third sampling of Kaliis Smith in as many weeks- maybe less. Her large contribution to the large-ish band Soul Magnets was no less striking than the all the others’ in that band, and her solo performance at the 413 the night-before-last, with just electric guitar, vocals, and original songs, was intriguing… very. Sharing that very thought out loud prompted Kaliis’ friend and Ex-Temper band-mate to put in a word of promotion regarding tonight’s show opening at the Iron Horse. And here we are!

The Roches meet the Heads. A trio of sweet and volatile voices charge forth, trade off, back each other up, and really grab the ear when they nail their harmonies- often and well. Intricate interplay between twin guitars and the rhythm section  can’t help but bring Byrne and Belew to mind, and intelligent songwriting certainly calls up the Eno-esque intellectual inclinations of the thinkers behind the New Wave that parented or presaged the punk movement.

Similar impressions follow from the next two acts, starting with the stand up solo Fred Abong. More straightforward than the abstract leanings of Kaliis Smith, and more moody and dark, this has a sound and feel not unlike a fly-on-the-wall observation of David Gilmour working out Smashing Pumpkins songs. His dry voice warms up as he goes along, and his playing increases in facility and dexterity over the course of his set, reminding the listener of his plea for mercy upon first taking the stage, saying he “hadn’t played in three months.”

Kristin Hersh and her Electric Trio rock hard, maybe more so than the openers, and also within that post-punk, alt-edged, brash attack fueled by grunge. A hint or two of the aforementioned Pumpkins shows through, and a whole lotta Patti Smith jumps out in the songs and the vocals… a little of the attitude, too. Ms. Hersh plays some pretty mean guitar, with more than a few chops to demonstrate her dexterity and versatility.

This is where a certain spirit of the 60’s shows through- in the guitar. The thunderous thwack of the bass could be right at home in both the prog and Jam camps, throbbing and  continuing from the 70’s and 80’s forward; and the guitar is not to be confused with 60’s-style folk strumming. Rather, Ms Hersh’s playing has elements of “psyche” guitar to it. Fuzzy tones, wah-wah, and ‘smeary’ sounds emerge at will along with the clean lines and articulate phrasings.

A humble scribe oughtta get hip to a few names among the current cadre of woman guitar aces; there’s prolly some things in common as far as their influences and sources of inspiration coming from, say, their (grand?) parents’ old records, with a similar free-flow letting go of inhibitions such as started in those days and carried through the decades and their genres.

I came for the opener, and I stayed for the whole show- gladly. I would come back for more, too- willingly, excitedly even. For the time being, though, it looks like a few local bands will sustain me just fine. I think I’m not even half-way through the Kaliis-list; she has at least a couple-few more things going on.