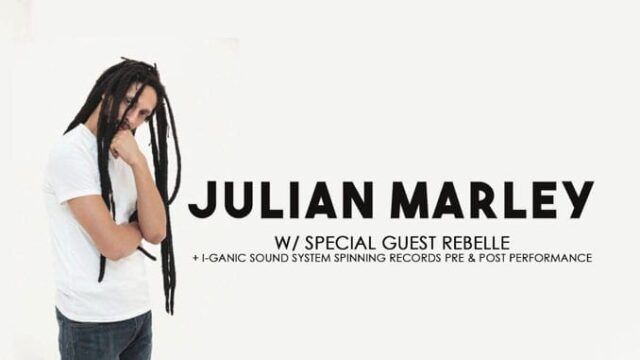 Avid Reggae fans will remember that Bob Marley passed away on May 11, 1981. Two years ago, Hawks and Reed in Greenfield hosted the Wailers on that date and this year they happened to have Bob’s son Julian. It’s a quirk of fate [some would say Jah’s will] that we now have FIVE Marleys out there at various times of the year, versioning their Dad’s classics and playing their own tunes from their own very good records.

Let’s look back a minute. Eldest son David, aka Ziggy, debuted with his siblings Steve, Cedella, and Sharon on a classic JA 12″ single way back in ’79.  The tune was “Children Playing in the Streets,” which Bob wrote in ’75 for his kids to one day record. 1982 brought the 12″ “What a Plot,” perhaps Ziggy’s toughest song ever, with the great lyric, “you think I’m gonna get old, sitting in the cold, my mama got to eat, my children got to eat, oh Lord, I got a very big family.” Indeed.

It was a bittersweet exclamation point to tragic passing of his father, when Ziggy was just 12! 1985, just a year after the Wailers all-time best-selling Reggae LP compilation “Legend,” Ziggy and the sibling Melody Makers debuted on EMI with “Play the Game Right,” followed the next year by “Hey World,” where Chris Franz and Tina Weymouth produced 1989’s “Conscious Party” yielding a Grammy and established Ziggy’s as Dad’s rightful heir.

But wait, there’s more!  Towards the end of the Melody’s 10 album run, 1996 saw debut albums from Damian “Jr. Gong” and Julian. Jr. Gong went on to massive success in 2004 with “Welcome to Jamrock,” while Julian’s more low-key production schedule yielded more rootsy CD’s in ’03 and ’09. Now comes “As I Am,” the 2019 release which he arrived in Greenfield to promote. I’ve checked out all of Julian’s recordings and was psyched to catch him live in the medium-sized club space of Hawks. He didn’t disappoint.

The super tight Uprising opened with “Lion in the Morning” from Julian’s ’96 debut followed by “Hey Jack,” a funky plea for social grace. The set included several more tunes from the new CD, including the upbeat “Broken Sail” [“I feel like a ship with a broken sail, I don’t wanna feel this way no more”].

Julian’s stage presence is, of course, reminiscent of Bob’s, but this is a writer for 2019, bringing the peace, love and unity Rasta message up to date.  “Cooling in Jamaica” laid out a solid late 80’s type groove and, in fact, he interpolated a great Dennis Brown tune, “Sitting Here Watching” on that one. He hit on the current single “Straighter Roads,” and whipped the dancers to a frenzy with the sweet “Family and Friends [Smile]” and the sexy “Biology,” not forgetting a tribute to the Holy Herb with the syncopated “Chalice Load.”

This guy has a lot of plays in his book. He even updates Bob’s 60’s cover of the Tom Jones hit, “What’s New Pussycat,” bringing Dancehall legend, Beenie Man, to spice it up. Although he didn’t bring that one to the stage at Hawks, he didn’t disappoint when it came time to pay tribute to Pops.

Third song in was the Wailers classic, “Concrete Jungle.”  This tune, which led off the Wailer’s debut Island LP, “Catch A Fire,” was many US fans first exposure to the Jamaican music. Marley had cut it earlier in the ’70’s, but this time he added an as-yet unheard-of concept-Anglo-American rock/blues lead guitar. The unassuming Muscle Shoals guitarist, Wayne Perkins, was brought in, and he did the musical equivalent of Malcolm Butler’s Super Bowl catch of a few year back. The young, near redneck white picker played a hair-raising accompaniment and solo that stood the test of time to this day.

When Marley later brought New Jersey native African American Al Anderson into the Wailers in ’74, this tune became a showcase for Al [as in “How’s he gonna blow our minds THIS time?”]. Julian’s guitarist, Luke Andrews didn’t disappoint as he shredded and bent white hot blue noted to portray this timeless expression of urban underclass oppression and suffering.  This he did again on the equally timely “3 O’clock Roadblock” (“Hey Mr. Cop, I ain’t got no birth certificate on me now…I…Rebel Music”).  The classic “Exodus” also brought the house down with a very timely and authentic eternal Wailers vibe.

Bob Marley’s story and legacy are a treasure that we’ve carried for the last century, a magic alternative script to the constant drubbing and dumbing down of our legacies. Bob said, “My music will go on forever.” Yeah. Just ask Julian, or Ziggy, Steve, Damian, and Kymani!

Rebelle, aka Black Rebels, opened the show with a stunning set of original reggae sung in 5 languages, among them French, English, and Woloof.  The tunes were beautifully played and harmonized with Calpana Devi and Manou fronting a tight multi-instrument ensemble to warm the crowd up for a warm Marley evening! 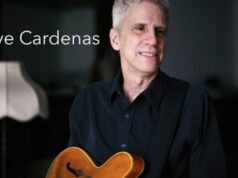 Steve Cardenas Jazz in the Valley 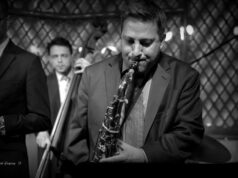 Erin Harpe and the Delta Swingers at Hawks and Reed-February 2nd,...