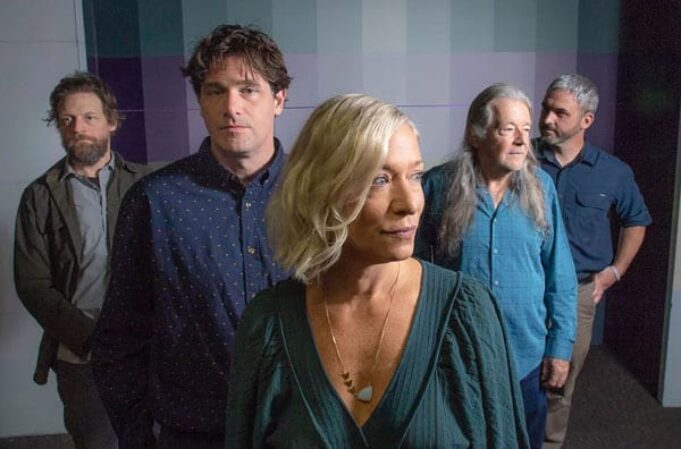 Opal Canyon, an alt-country quintet from Northampton, is poised to release its first album. Called Beauty and Loss, the album is full of meditations on life both positive and negative. The band will celebrate its release with a concert at the Parlor Room in Northampton on Friday, April 26th. Their friend Dennis Crommett, from the Winterpills and Spanish for Hitchhiking, will be their special guest. Tickets are only $10 in advance and can be purchased right on the Facebook event page.

Recently, LMNR had a chance to catch up with Debra DeMuth, the lead singer of Opal Canyon. Valley music fans may already know her as a part of the duo And the Neighbors, which was her and her husband Dave Houghton. Read below to learn about the meaning of the album title, a cool moment of musical synchronicity, and what the future holds for these folk-rock troubadours.

LMNR: Debra, your band Opal Canyon is composed of members of other well-known local bands including the Lonesome Brothers- and you yourself are half of And the Neighbors with fellow Canyoneer Dave Houghton. Would it be fair to call Opal Canyon a Valley “supergroup”?

DD: This band is certainly a group of super musicians. Between Dave, Ray, Jason and Bob there’s over 100 years of experience combined. But ultimately, we are a group of people with mutual respect for what each of us brings to the band. As the singer and songwriter, I can honestly say there is not a finer bunch of people and musicians to have by my side. I do feel an incredible amount of gratitude for their talents and their willingness to bring my songs to life.

LMNR: Tell us a little about your musical history, your inspirations growing up and now, and why you chose the Pioneer Valley as your home.

DD: My musical history goes back to my grandparent’s basement watching them groove to Sergio Mendes and Brazil “66. My first concert was in my living room singing Carole King to the pillows on the couch. Yet, as an adult, I was not a singer first but a writer. My dear friend and mentor, Robin Lane (of The Chartbusters fame) helped me find a voice as a writer. We worked together through her non-profit organization, Songbird Sings, for women healing from trauma. She believed in my stories and songs. My husband, Dave Houghton, gave me further confidence to believe in my voice and sing beyond the living room.

I landed in the Valley by way of New York City. I worked in NYC for over 12 years as an advertising executive. Once I had my first child, I knew I needed a more peaceful environment where we could explore creativity and nature without the pressures of a big city. I wanted to dedicate myself to my son and not a corporation and the Valley allowed me to do that.

LMNR: Your debut album Beauty and Loss features cover art that’s reminiscent of Joni Mitchell’s Ladies of the Canyon and Court and Spark, as well as CSNY’s So Far. Who created the album art- is there a correlation there?

DD: While those are two of my favorite albums, they were not consciously the inspiration for the “Beauty and Loss” visuals. I really wanted to support a local artist because there is so much talent in the Valley that does not get its full due. I discovered Sarah King’s breathtaking illustrations through a friend and fellow musician, Wishbone Zoe. I particularly related to the intertwined elements of beauty and grit. The snarly teeth contrasting with the profile of a woman’s face. The stark, realistic outline of a woman’s body behind the soft watercolors. The juxtapositions captured the essence of the album.

Life has its beauty and its loss.

LMNR: Share with us, if you would, the tale behind the band’s name, Opal Canyon.

DD: We wanted to create a sense of place with the music. A dreamy place you could escape to when needed. A place that would always be accessible. A place where you could climb in and curl up. We felt that Opal Canyon could be that place. The music has its vastness, its comfort, its psychedelia, its truth and its connection.

LMNR: Western Mass is a wonderful place to live, as you and I both know. Will you give us some of your favorite places in the area- for eating/drinking, for musical inspiration, for fun, for self-reflection?

DD: Dave and I live on a very quiet country road in the hilltowns. I walk most mornings and use that time to work through my struggles. Sometimes when the stars are aligned, I turn my thoughts into a phrase that helps me make sense of what I’m going through. Sometimes those phrases become lyrics. It’s like turning a rock over and over until the edges are smooth and it becomes a gem. I have this amazing spot on my walk where 3 songs on the record emerged. I call it the songwriting vortex. I swear there is some energy portal in that spot. For example, the curled-up ferns on the side of the road inspired a lyric, “unfurl the fist of your heart.”

For fun, we have several favorite swimming holes where we will go and camp out for the day. We have gone swimming as early as April and as late as October. We are both water signs so it’s no surprise that for us, the water heals all wounds.

LMNR: What’s a wild or fascinating story that happened to you, before/during/after a performance?

DD: My first time singing in a bar was 12 years ago when my friend, Robin Lane, asked me to sing a song I wrote with her. It was at The Rendezvous in Turners Falls. Robin was playing with Ray Mason that night and Ray was very supportive and encouraging of me. Today, Ray is in Opal Canyon playing my songs and supporting me in an even bigger way. It is a great example of synchronicity. It truly amazes me.

LMNR: What’s your favorite song on Beauty and Loss? What’s the story behind the title?

DD: It’s so hard to pick a favorite song because of course, they are all so dear to me in their own way and each has a story of its own. If I had to pick one it would be “Wartimes”. First, from an arrangement perspective, I had a very clear vision of how I wanted the song to build. I wanted it to have restraint and space that we could slowly add to.  Lyrically, this song captured much of the essence of this time period in my life. I have three sons who are now young adults. I was having this realization that, I am now the mother of men. I was realizing the shifting dynamics of our relationships and that they needed me in different ways than when they were young. They needed me to give them space but when times were tough, they still needed their mom. So, “Wartimes” is my call to them as men. My call to say that, I am always here no matter how old you are or how rough life gets.

The title, “Beauty and Loss”, is also a call to my sons. A call to say that life is a contrast of beauty and loss and that we cannot have one without the other. But that there is so much beauty that surrounds us.

LMNR: What does the future hold for Opal Canyon?

DD: We are very grateful to Signature Sounds for hosting us and our album release show on April 26th along with opening act, Dennis Crommett of Spanish for Hitchhiking and The Winterpills. Also, we will be opening for Los Lobos at Gateway City Arts on June 9th courtesy of DSP Productions. We will be playing in Boston, Franklin County, Woodstock, NY and other venues throughout the summer. We are excited to book more shows and share our music. And, I keep taking walks and writing songs so another record will be in our future.

DD: I am simply grateful when someone enjoys an Opal Canyon song. Knowing that my truth and emotion is something that they can connect to, It is reciprocity at its finest.

Make sure to mark Friday, April 26th on your calendars and see Opal Canyon’s debut/album release at the Parlor Room w/s/g Dennis Crommett. RSVP to the Facebook event (and buy tickets!) HERE.