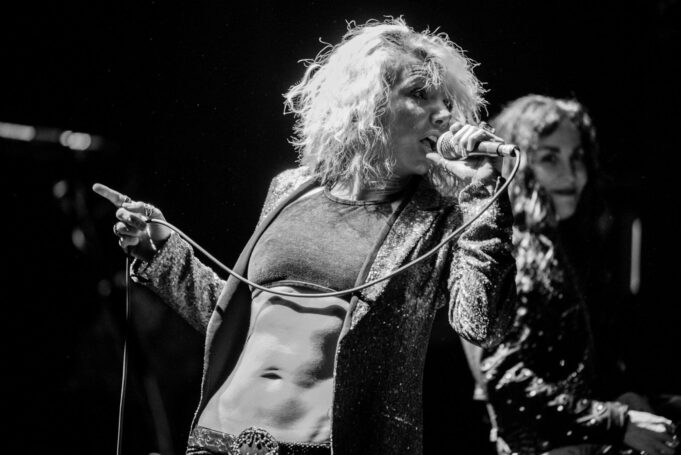 Lez Zeppelin, is the aforementioned Paynes on lead guitar, Marlain Angelides on lead vocals, Leesa Harrington Squyres on drums and Joan Chew on bass and keys.  The show started off with a bang, with a knock-your-socks off version of Communication Breakdown.  Having never seen Lez Zeppelin live before, it was a revelation.  They sounded very much like the real thing with a women’s spin to the music and the fans wanted more.  Angelides vocals are not Robert Plant’s, but there’s only one Robert Plant.  Yet she brings a sexiness to her singing, instantly winning over the crowd.  The crowd for its part thought the band was the second coming of Led Zeppelin.  Being into every song and totally immersed into the performance.

The band played for about two hours with three encores.  Lez Zeppelin performed nineteen Led Zeppelin songs and the crowd just ate it up.  The band was founded in 2004 and by the scene at The Gramercy; they’ll be around for a long time.  They’ll be on tour again starting on May 3rd & 4th in Jackson, California.  If you’re a Led Zeppelin fan and Lez Zeppelin playing in your town, be sure to see these amazing ladies rock and honor Led Zeppelin.

How Many More Times/Foxy/Whole Lotta Love

What Is and Should Never Be

May 18 Spire Center for the Performing Arts Plymouth, MA