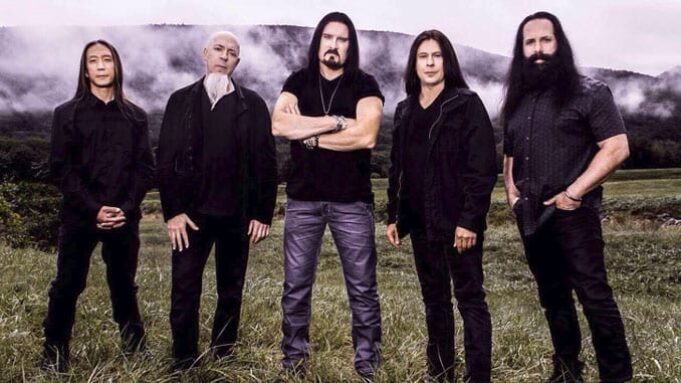 Dream Theater at the Oakdale Theatre in Wallingford, CT on April 9, 2019

As I get older, I realize that the work-life balance becomes more and more important for a positive and healthy state of mind.  This becomes especially important around my birthday, a reminder that life is short. Compared to the Universe, I know that I exist in this physical vessel for a blink of an eye, and I need to take the time to enjoy life when I can. So it seemed serendipitous that I was given the opportunity to see my first Dream Theater show, “Distance Over Time,” in the week leading up to my birthday. I am not very familiar with their music, only hearing one or two of their songs on my Prog Pandora station, but what I have heard, I like.  So without any further prior knowledge of Dream Theater’s music, I went to the show as a complete newbie.

As part of my entry, I was given a photo pass.  Not really knowing what that meant, I dusted off my old $50 Sanyo digital camera and with my notepad and pen arrived at the Oakdale at the allotted time and waited in the general business office until the ½ dozen photographers were ushered into the theater to stand and take pictures behind the soundboard for the first 15 minutes of the show.

Waiting for the band to come out, at my first glance of the drum kit all I could think of was, “Is Neil Peart coming out of retirement?”  I had done a little research on the band members themselves and was not surprised to find out that Mike Mangini is a world-class drummer and the rest of the band, composed of founding members John Petrucci on guitar and vocals and John Myung on bass, with James Labrie on lead vocals, and Jordan Rudess on keyboard are also born of discipline, talent, and prodigious roots.  Dream Theater is a Massachusetts native band forming in 1985 at Berkeley School of Music in Boston, who can still give the audience an amazing auditory and emotional experience after all those years.

The giant video screen behind the band, played a prominent part in visualizing the journey the audience was about to go on with the show starting out with a spaceship traveling through space.  The robot commanding the vessel, in many ways, reminded me of the silver-bodied robot in the 1927 Meteropolis.

The first set showcased many of the songs on the new album.  They opened with Untethered Angel and it was clear right away that the technicality of this band was going to be on point all night.  Once our time limit was reached, the photographers packed up and I made it to my seat and probably had one of the best tickets I’ve ever had in all my years of going to shows.  Falling Into the Light gave the audience a softer side of the band, reminding me of King Crimson’s second album, In the Wake of Poseidon. Barstool Warrior was a powerful song with a backdrop of images showing fishing towns and dockside bars.  Growing up in New England, where aquaculture is such an important part of our regional history, it made me wonder if, as Dream Theater toured, they changed the images to evoke the history of other regions such as steel mills and car factories in the Rust Belt or tractors and grain silos in the Heartland.  Before the set break, Dream Theater played Pale Blue Dot, a song who’s lyrics and video backdrop evoked the dichotomy of order and chaos, simplicity and intricacy, Earth and Space, life and death.

During intermission, the video screen projected what appeared to be the exterior of a  large mansion at dusk and music seemingly from a phonograph played, reminding me of Art Deco, Speakeasies, and The Great Gatsby.  The audience was “outside” taking the night air before returning to the party. Then the fun really began. Being the 20th Anniversary of their concept album, Dream Theater played “Scenes From a Memory” in its entirety.  As concept albums go, this one is in good company alongside Tommy, A Passion Play, Supper’s Ready, 2112, and Operation: Mindcrime.

The second set opened up with a hypnotic session playing over the PA, a therapist preparing his client to reach a meditative state in order to recall repressed memories. The animation was synched in with the songs and was done mostly in sepia tones in a style which reminded me of the Disney’s Atlantis: The Lost Empire.  It was a smooth transition from the intermission animation and the memories of the client, Nicholas. It’s only after I got home and looked up the synopsis of the album, did I fully understand what the story was about. During “Through Her Eyes”, a scene of a graveyard flashed headstones with notable musicians Bowie, Cornell, and Zappa.  I was amazed at James Labrie’s voice it was so clean and clear. After 20+ years as a front man, it’s rare to maintain that tone without taking care of the “instrument.” There were also times I was able to dance, yes I said it, dance, during this set.

Per my usual, I cut out of the venue prior to the encore.  I can’t believe I’m saying this, but with a curfew of 11pm, I was happy to leave the show at 10:40pm  I live far enough away and am too ornery to have to sit there in the parking lot, driving at a snail’s pace to escape it, and get back on the road in a timely fashion.  As much as I love to go to shows, my work-life balance that night also included having to get up at 4:30am the next morning. Lack of sleep aside, Dream Theater definitely recharged my batteries that night and I can’t wait to delve a little more into their discography.  This modern prog metal band is definitely worth seeing live, I found the symphonic quality of Dream Theater’s music and song writing, coupled with the raw edge of metal, sublime.