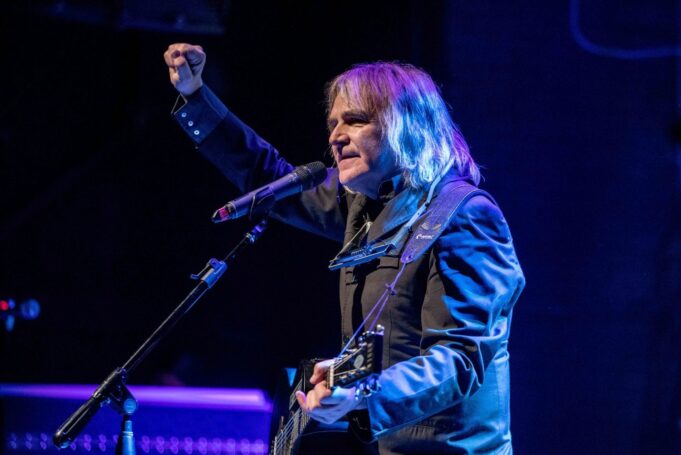 The Alarm had their annual “Gathering” in New York City this past weekend playing two intimate sold out shows. The first at The Gramercy Theater and the second at Irving Plaza. For the lucky few who witnessed the Gramercy Theatre show, these fans were treated to not only a full on Alarm show but also a short film, followed by a Q&A with co-founding member and lead vocalist of The Alarm, Mike Peters and Jules Peters, Mike’s wife and band mate which was hosted by former MTV alumnus Alex Colletti. Followed by an acoustic solo set by Mike Peters.

The full on, high-energy rock part of the night was just amazing. The Alarm, with Mike Peters as the only original member still with the band played the 1986 UCLA “anniversary show.” The Alarm were live on MTV (link below) in 1986 at UCLA and at The Gramercy Theatre in 2019 the band replayed the exact same set list as the 1986 show. The current lineup for the band is Mike Peters on acoustic guitar and vocals, James Stevenson on guitar, bass guitar, bass pedals and a bass/six string double-neck guitar. Yes, he played all of these at the show. On drums is Steve “Smiley” Barnard and for the second half of the show Jules Peters is on keyboards.

See pictures from the show taken by Mark Ashkinos here.

Having never seen The Alarm live, yet being a big fan of their albums, among them Declaration (1984) and Strength (1985) the songs were very familiar to me. What I found unique is that there were three microphones up front; center stage, stage left and stage right. Barnard was at the drum kit in the back and Stevenson was next to the drums, so I’m wondering what’s going on here. Well, what Mike Peters does is sing from mic to mic, so the crowd can see him better. It’s a simple, yet ingenious way to be more intimate with the crowd. Peters never loses his place and goes gracefully from the mics like he’s been doing it for years, which I’m sure he’s been doing.

The set lasted about 75 minutes and the crowd was into from the first song Declaration to the last encore song We Are The Light. After being teased by the short film, the Q&A and Mike’s acoustic set, the crowd was hungry for some loud rock ‘n’ roll which Peters and the rest of the band handedly delivered. The Alarm will be on the Sigma LXXXV Tour, touring with Modern English & Jay Aston’s Gene Loves Jezebel starting in July. I highly recommend seeing The Alarm, as Mike Peter’s leaves it all on the stage, leaving him and the crowd totally exhausted.

Set list:
Declaration
Marching On
Howling Wind
Knife Edge
Blaze of Glory
Absolute Reality
Where Were You Hiding When The Storm Broke
Walk Forever by My Side
Spirit of ‘76
Sixty Eight Guns
Strength