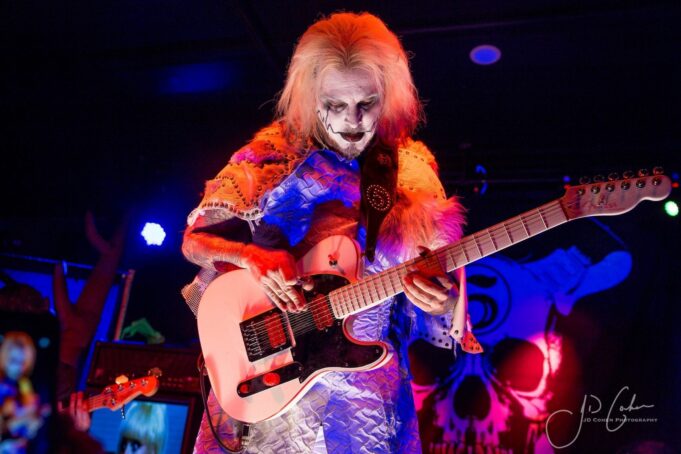 The big green tour bus of the John 5 freak show pulled into New Bedford on Monday to the delight of fans and guitar enthusiasts. Monday night is not typically a big night for live music, and John 5 could have been doing other things like attending the movie premier of the Dirt with his wife and friends from Motley Crew, but he and his fans chose to be in New Bedford at The Vault Music Hall & Pub at Greasy Luck.

The Vault Music Hall & Pub at Greasy Luck has become one of New England’s best venues for hard rock and metal bands, drawing music fans from Connecticut, Rhode Island, and Massachusetts. New Bedford is going through a revitalization and gentrification of sorts, and good music and good food is a big part the city’s rebirth. Greasy Luck offers good helpings of both.

Touring in advance of a new album titled Invasion that will be released this summer, and new animated videos for the songs Zoinks! and “I am John 5,” John William Lowery, aka John 5, took the stage at Greasy Luck promptly at 9:30. John 5 and The Creatures (Ian Ross – Bass, Logan Nix – Drum) have been making annual stops in New England for the past few years, and anyone who is fortunate enough to see the band and John 5’s guitar brilliance once knows not to miss them whenever they come around.

Although their performance this year in New Bedford was very similar to last year’s set at The Middle East in Boston and set lists don’t change that much from show to show, the quality of the band and John 5’s jaw dropping talent always make for an entertaining and satisfying night of ambitious, dynamic, and diverse music. Some guitar players have incredible technical skill, some have beautiful tone, and other have monster riffs, John 5 has it all and delivers his genius with humor and good cheer. The highlight of any John 5 show is the closing Medley where the band rips through some of rocks best riffs at a rapid fire pace and the audience is encouraged to participate by singing along. Monday’s show was no different.

Although many shows also include some beautiful and melodic guitar pieces, Monday night’s show was mostly full on flash and monster guitar riffs. Songs like “Crank It” and the funky rock thumping of the new “Zoinks!” made the small room rumble. At times you could feel the music in your chest as much as you could hear John 5’s guitar shredding pierce your ears. Ian Ross’s bass was prominent in the mix which also contributed to the heavy sound behind John 5’s virtuoso guitar work. Although the theme of John 5’s shows are always guitar pyrotechnics delivered with a dose of humor and good fun, he appeared to be in especially good spirits, thanking the crowd for showing up on a Monday night and assuring them he would be back next year.

Jared James Nichols, named one of the top upcoming guitar players in the world, played a powerful set of blues-driven rock to open. Jared James looks like and plays with the energy of a young Ted Nugent. His blistering set included catchy and rockin’ originals like “Last Chance” and “Don’t Be Scared,” an extended Allman Brothers tease and closed with Mountain’s “Mississippi Queen.” The band is currently touring with John 5 and are not to be missed.

Setlist:
Season of the Witch
This Is My Rifle
Hell Haw
Howdy
Here’s to the Crazy Ones
First Victim
The Black Grass Plague
Zoinks
Behind the Nut Love
Mando Jam
Beat it
Medley
Star Spangled banner

Encore
I Am John 5

Check out the full gallery of photos for John 5.

Check out the full gallery of photos for Jared James Nichols.

Check out the full galler of photos for Dead Girl’s Academy.