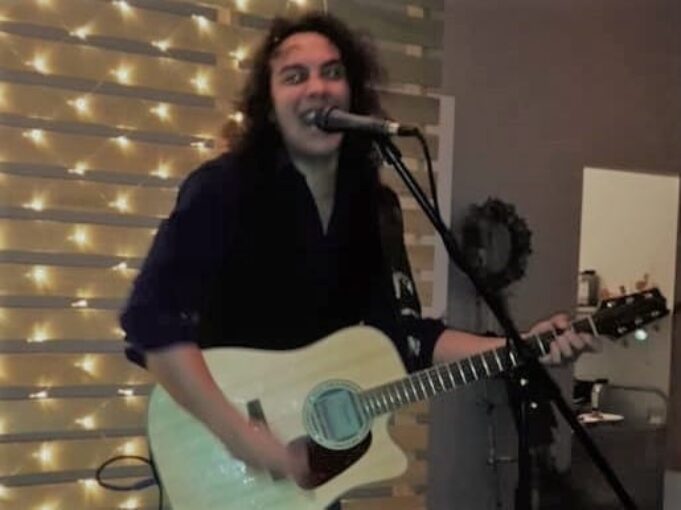 Cool thing about catching TLT in Pittsfield, …it’s his home. There’s a bunch of people already hootin’ and hollerin’ and behaving like, reeeally… well, comfortable. One guy starts right off buying the star a shot- Tony weren’t even started yet, not really. One song so far ain’t nothin’ but a sound check, I do believe.

Now, next thing ya know, this lovely lass beats the dude to the punch… or shot. She delivers the wee tiny glass of see-thru liquid right up to his face while the sloe Joe is still ordering. I offered the ol’ Joe a tidbit of wisdom from my years of >hic<‘sperience: “no worries, man- two beats one anyway!”

In just a few minutes, it hits me like a first time (or maybe I just re-realized an otherwise obvious observation) that half the fun of a Tony Lee Thomas show is listening to the stories. As a matter of fact, I’m hearing more calls for stories than for songs from this super-enthused and steadily-building crowd at Methuselah’s.

Much to my delight, though, the next number to spring forth from this ever-versatile fountain of youthful energy is a really cool surprise. In between the stories and the originals (they kinda morph together) the boisterous boy playfully plays himself into a Mac Rebennack chestnut. Not all in attendance are of a vintage to remember a pair of chart-toppers from 1973, but they all dig it just the same. Cycling through an intro, he threatened to hit us with a Dr John song- whereupon I pounced into position stage-side.

Tony played one of his own songs that doesn’t come out of the closet all that often but stands as a big favorite- of mine. I’ll see if he can tell me the name; I always call it “the one about the lake on fire” – like its an episode of Friends or something.

Too soon by any reasonable standards (and those of TLT’s fans too), this Methusela minstrel’s meter was approaching its own limit. More music was suggested, requested, and promptly delivered, carrying the seeming superstar past the prescribed time o’clock- and again, the calls came for stories- how often do we hear pleas of preference for an artist’s storytelling- as an encore, no less!

Tony Lee Thomas brings the full package, the whole deal; and he does it all by himself, as the super-archetypal stand-up/solo performing artist. He sings, he plays, he cavorts cooler than dancing; and he tells stories, jokes, and some secrets too. This. Is. Entertainment. TLT is the complete entertainer. And he can do it dirty or keep it clean, too- either way. The whole deal, plus his personality.

There are plenty of places to see this guy, in the Berkshires of Western Mass or the Green Mountains of Vermont; and sometimes on the beaches of Martha’s Wine Yard or Nan’s Truckers. Wherever good fortune brings a body into a House of Tony, amusement, amazement, and entertainment ensue in voluminous measure; and not just from the stage and sound system. The crowd is part of the package. One part support from friends and fans, another part reciprocal energy from the rest, such as attends any awesome artist, and the most large-ish part rapport that can’t be contrived. It can only be real, and the only way it can come is naturally. Not that this is all such serious stuff, either- it’s fun.

What better way can there be to bare the soul, share the self, and contribute to the community than with fun? It takes a lot to provide entertainment, but fun is key. Without fun, all’s ya got is ‘interesting’ … maybe ‘stimulating’ … ‘thought-provoking’ … maybe even ‘inspiring.’ Toss in fun, especially the Big Fun that’s a big part of a Tony Lee Thomas show, and whatcha get is memorable- the kind of fun that keeps ’em coming back.

Did we note that TLT had only so much time because he’s the Opener?