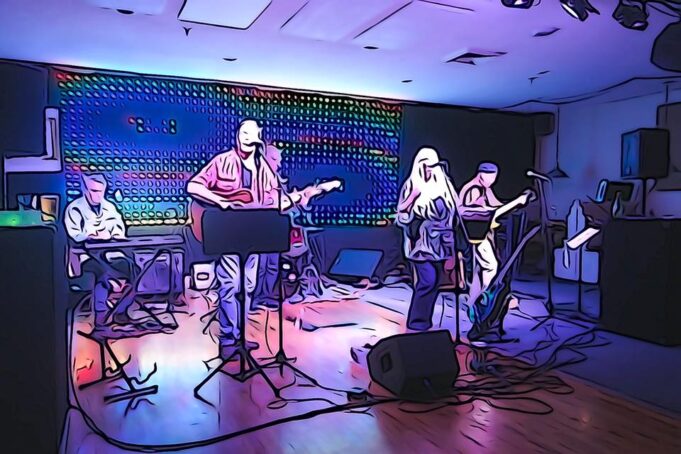 Performing Live at Club One in Feeding Hills, MA March 02 2019

AXIS describes themselves as a classic rock band- they made a real good impression last time around, but this time… doubly so! An extraordinary range of material is available to this great band.

For starters, only so many of the many bands out there come packing keyboards. Two sets of vocal chords, one M and one F, open up the possibilities; each and/or either can take the lead; sometimes they share or swap. With the both of ’em armed with acoustic six-strings an an array of percussive toys, the whole spectrum broadens out. Half the rest of the players add bgv’s as appropriate, so we gotsa lotsa voices in the mix. The rhythm section knows no bounds or limits; a band like this needs that. And the lead guitarist has to be capable beyond mere competence, and versatile beyond belief- without being an arse about it, of course.

All of this comes together, as it absolutely must, with a band that plays any and all types of music (within their chosen “class,” of course). AXIS plays what they call ‘classic rock,’ but they lean toward the earlier stuff- earlier seventies, mostly- while reaching back into the folksy sixties more than coming forward into the Arena Rock era- not to say they don’t, though; the listener gets a healthy sampling of Floyd, Seger… the good stuff.

From one decade, there is “White Rabbit,” and from the other, how ’bout “One Way or Another“? Blondie, yes. And the Airplane number like you’ve never heard it. Oh, and “Good Times Bad Times” … I could listen to this guy sing it, with them those great backing vocals, forget all about that Plant guy.

No danger of coming off like a wedding bell band, either, with the proportion of real rockers coming out of ’em. And they’re just too GOOD; much too dynamic/ engaging/ entertaining to run much risk of getting stuck in any such rut. Besides, they mix in too much Hendrix, Cream, Santana and such to let anyone let out a “ho-hum.” AXIS sure is FUN!