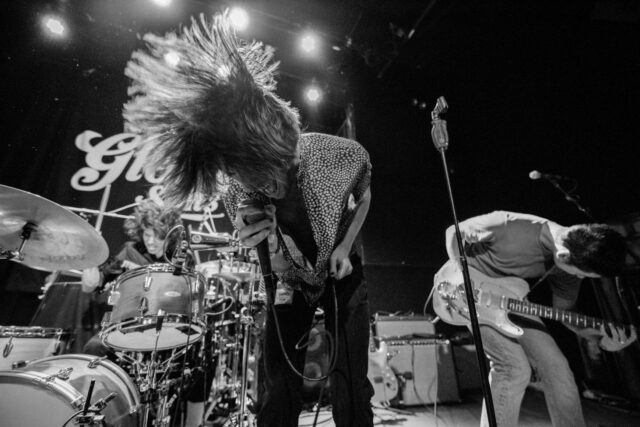 Photos and Review by Mark Ashe

A full gallery of photos of this show is available here.

Liily, the alternative hard rock band from the San Fernando Valley of California, put on a totally frenetic forty minute set on Valentine’s Day at Rough Trade in Brooklyn.  The five members of Liily are all nineteen years old and they wowed the crowd opening for the Canadian band, The Glorious Sons.

Liily opens with a brief instrumental, and then all hell breaks loose.  The band explodes live.  The guitars and drums kick it into tenth gear, and Dylan Nash, the lead singer, becomes one with the music.  What seemed like five nice Southern California teenagers going to play some music just blew my mind.  From the moment the instrumental was over, Liily played as if this was the last show they were ever going play.  They took their cues from artists such as Rage Against The Machine and Foals.  Mind you, not many people in the crowd knew whom they were, and with only three songs available, Liily’s goal was to win over the East Coast crowd.  They succeeded on all levels.

Check out Mark Ashe’s review of Liily at the Mercury in NYC from July 2019 here, including some amazing photos.

Liily has a fresh sound comparable to Jane’s Addiction.  Liily consists of Nash on lead vocals, Sam De La Torre on lead guitar, Charlie Anastasis on bass, Desi Scaglione on rhythm guitar, and Maxx Morando on drums.  De La Torre’s guitar riffs are unique and memorable, and Maxx Morando has to be the fastest drummer I’ve seen in a long time.  I think the best way to describe the band in one word would be intense.  Their debut EP, “I Can Fool Anybody In This Town,” is coming out on March 8th, and I for one can’t wait to hear it.

I Can Fool Anybody In This Town