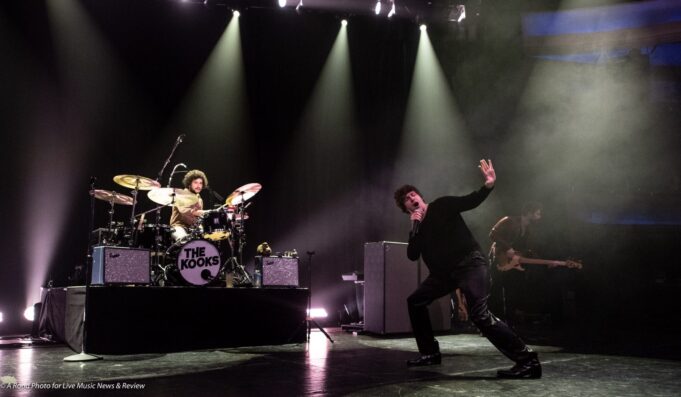 Performing Live at the Hollywood Palladium on February 12 2019 in Los Angeles, CA

A full gallery of photos from this show can be viewed here.

The Kooks played solidly in the Britpop tradition of Blur, Oasis, and the La’s with a nod to American alternative bands, the Strokes and MGMT, during a successful and lively stop at Hollywood Palladium on February 12th as a part of their U.S spring tour.

The band hit the stage to a large and eager crowd ready to see them in support of their latest release, Let’s Go Sunshine, their first studio album in five years. That’s a lifetime in terms of music, but the Kooks hadn’t missed a beat as fans still packed the venue and buzzed with anticipation. The Kooks have indeed grown up, but clearly they haven’t forgotten their indie roots. While the tracks on Let’s Go Sunshine are a bit more mellow than those on past albums, they are still rooted in the sound the Kooks have always been known for and were as warmly received by the audience as the classics.

Although the Kooks are touring in support of the new record and did play several tracks from it, the night was filled with plenty of hits from over a decade ago. The first of which, “She Moves In Her Own Way,” from the 2006 album Inside In/Inside Out, primed the crowd for the rest of the set as frontman Luke Pritchard kept the room on its collective feet with his quirky moves and charismatic presence.

The band kept the beat steady in support of Pritchard throughout. The Kooks ended the set with “Naïve,” also from Inside In/Inside Out, and their most popular song to date. The crowd left on a high, after receiving what it was they came for—dancing, nostalgia, and a good time.

The Kooks were accompanied by LA’s FUTURE FEATS and singer, Barns Courtney. Courtney set the stage for the night with his energetic, rocking set and—with plenty of encouragement from the audience—managed to stage dive and crowd surf twice. Courtney is one to watch—his level of energy, showmanship, and songwriting skills will have him heading venues sooner than later.

Always Where I Need to Be

She Moves in Her Own Way

You Don’t Love Me

Junk of the Heart (Happy)

A full gallery of photos from this show can be viewed here.