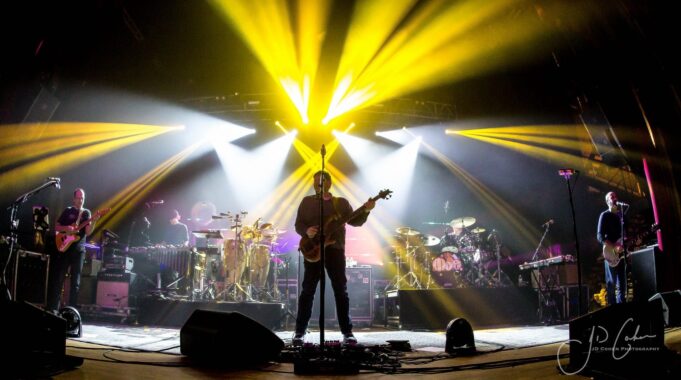 moe. performs live at the Strand in Providence on SUN February 17 2019

Full show taped by Bryan V. above, use the arrows to toggle between songs.

A full gallery of photos of this show by JD Cohen is located here.

When moe. bassist Rob Derhak flips off other members of the band midsong, with a smile on his face, fans at the show in question just might be in for a very fun show, possibly even a great one. Derhak did this during a funny lyric flub on one of the band’s most classic songs, “Spine of a Dog,” in the beginning of the band’s first-rate performance at The Strand Ballroom in Providence, Rhode Island this past Sunday night. Yes, in spite of that lyric flub, or perhaps even because of itthe upstate NY presarios of jam delivered a tremendous night of music for the third night of their 2019 winter northeast run.

“Johnny Lineup” was a choice opener, and this first one along with the “Jazz Wank” succeeding it seemed like good musical warm ups for the band. Then it all really took off with the band’s big take on “Yodelittle,” a treat even just for coming into the show at song four. The song’s improvisation was handled deftly by all members, and was elongated into one of the first deep grooves of the night. For its second half, the band morphed its main funk section into an uptempo jog, keeping a cool spacey vibe while doing this.

This was the perfect launch pad for a cool, unique move into “Not Coming Down.” The transition here was so neat that even the band seemed to acknowledge it, or at the very least Derhak did. Right as drummer Vinnie Amico’s snare riff started up “Down” hit the room, the bassist joined in with his riff and had this grin on his face while doing so. The band was in a good form for the night and he seemed to know it in this moment. “Down” was a quick pick-me-up before pairing with its usual follow-up, “Wormwood,” and then “32 Things” was a highly satisfying close out to set one, as well as a nice landing point for for this great multi-song segment. In the middle of this one, percussionist Jim Loughlin executed he first of one of his air-tight vibraphone solos for the evening, and it heated up the song so much in that moment that guitarist Chuck Garvey took his guitar over to the vibes and squared off with him.

It was a couple of Chuck segments, too, that unboxed the band’s second set. “Annihilation Blues” hit it off and then “Who You Calling Scared” came next, and really set the rest of the night in motion. “Scared” is one of the handful of newer songs moe. unleashed on throughout 2018, and it’s becoming a favorite for many fans. Of course, the popularity of the song no doubt boosts when the band fleshes it out in tandem with another jam, as they did here. The newer Chuck tune gained speed and cruised right through a fun “Mar-DeMa,” and things were just getting going. “DeMa” burrowed onward with yet another well executed segue, now into “Bearsong,” and this is another big one for many folks.

“Bearsong” was one of several jams for the night that featured upfront the wicked stylings from guitarist Al Schnier. Halfway through this one, Schnier cranked out a fuzzing, feedback-esque guitar solo that was unique to anything else he did throughout the evening. The music started to get very interesting when the band departed “Bear,” slowly and smoothly, right into “Zed Nought Z.” Some might raise an eyebrow at calling the song “Zed” one of the highlights of a show, but this one truly flew. It’s a song that all five members get to simultaneously groove freely on, and when it connects it can bring a real nice bliss jam, like this version at The Strand did. The music and the vibe in the theatre just kept going even after this beauty, as the band pulled off a great, careful “Zed” “Kids” transition.

A couple of times throughout the night, Derhak did this really quick thing on his bass that was pretty gnarly—this mega-heavy, low bellowing of notes that rumbled the walls and the floor of the theatre. Listen to his midway bass solo on this version of “Kids,” and you’ll hear it. This “Kids” was a peppy one too, holding onto an energizing momentum from solos from Garvey and Schnier. Schnier was the main axman for this night, taking the majority of the leading solos during jam segments, and so he was not surprisingly the ringleader on the band’s mighty, chart-listing version of “Recreational Chemistry” from this show.

In a cool twenty-minute version, “Chem” flourished in both its groovy wind-up in the beginning, and the band was in really good feel here. Derhak especially put some very colorful, dance-worthy lines into the mix. But not even halfway through did the song start to kick up the dust and get truly electrified, sonically and artistically. Al and Chuck, while of course having their own styles, share a sort of off-the-wall approach to jamming out on songs. They can throw a lot of stuff onto the stage—a lot of notes, a lot of enthusiasm—and sometimes it’s so gung-ho that things spill for a bit, even get messy. But when they lock onto their solos, take cover. Or, in the case of the crowd at The Strand or even moe. crowds in general, just plunge in head first with them, because it’s going to be a whiplash-inducing ride that just gets increasingly better over the course of several fiery minutes. After you find the lyric flub, after those earth-level bass bombs, just the “Zed Nought Z” or the “Chemistry” and let the screams from The Strand clarify just how solidly moe. is rocking in 2019.

The band offered a textbook rendition of “Silver Sun” for the encore, and a straightforward go on this one is always at least a little bit of a treat, especially as the send off for a terrific night like The Strand. The northeast run continues tomorrow night with a stop in Rutland, VT, followed by a stop in Concord, NH on Thursday. This weekend, the band will finish the run with a two-night NYC run, at The Brooklyn Bowl and then The Beacon Theatre.