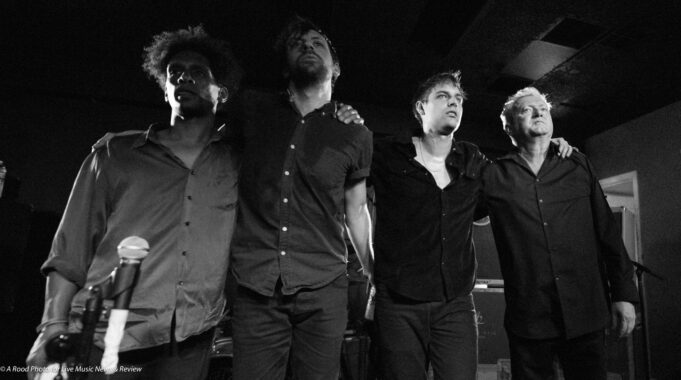 This show was the kickoff of their US tour, entitled Paper Thin Tour 2019. Though the band has been around since the late 1970s, only one original member remains: Andy Gill on vocals and guitar. The rest of the band consists of Thomas McNeice on bass and Tobias Humble on drums, and lead singer John “Gaoler” Sterry. Their music can be described as “post-punk,” mixing elements of punk, folk, and dub. Their lyrics are often meditations on the problems within society, so their music (mostly created in the 1980s) is more relevant than ever.

The venue, Marty’s on Newport, was in Tustin, CA (approximately one hour south of LA) and the place (with roughly 200-300 person capacity) was packed.

The lead singer was very animated and was all over the stage, moving between all three throughout the show. Musically, it felt tight. I wasn’t familiar with any of the music except “Love a Man in Uniform.”

There was no opening band, so the audience was treated to a full night of the Gang of Four’s tunes.

The tour is in support of a new single that was released in January, called “Paper Thin.” Their new album Happy Now will be released on March 29th, 2019 and is available now on pre-order in all formats from Pledge: https://bit.ly/2QHMLXa

MON 7 MARCH
Brooklyn Made Brooklyn, NY, US
Sold Out

TUE 15 MARCH
The Studio at Warehouse Live Houston, TX, US