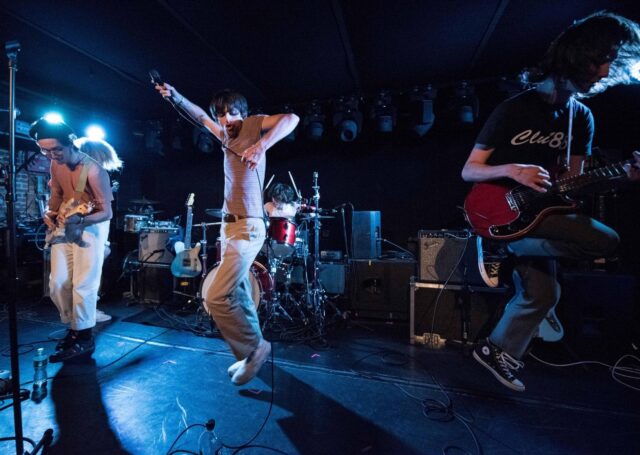 A full gallery of photos from this show is available here.

Liily, the alternative hard rock band from the San Fernando Valley of California put on a wild thirty-five minute set at Mercury Lounge in New York City on July 24, opening for the newly signed Atlantic Records twosome Illiterate Light. The five members of Liily are now mature twenty years olds, since the last time I saw them in February.

Liily, has gotten much tighter as a band. They’ve come together nicely, yet still not holding back, leaving it all on the stage. Liily is supporting their awesome new EP “I Can Fool Anybody In This Town.” The six song EP rocks like crazy and the live show captures the sound and takes the songs to the next level. Dylan Nash, the lead singer is one with the music. With his energy on stage and his towering vocals, he epitomizes the band. The band still blew my mind, even though I knew what to expect.

Liily played as if this was the last show they were ever going play. Taking their cues from artists such as Range Against The Machine and Foals, Liily is the real deal. The fans at the packed Mercury Lounge knew the bands lyrics as they were singing along, compared to the February show, where everyone was like, holy shit, this band is amazing.

Liily are Nash on lead vocals, Sam De La Torre on lead guitar, Charlie Anastasis on bass, Desi Scaglione touring band mate on rhythm guitar and Maxx Morando on drums. De La Torre’s guitar riffs are unique and memorable and Maxx Morando has to be the fastest drummer I’ve seen in a long time. Liily is a force to be reckoned with, and must be seen live.

Check out the great review by Mark Ashe of Liily’s Rough Trade show from FEB 2019 here.

A full gallery of photos from this show is available here.