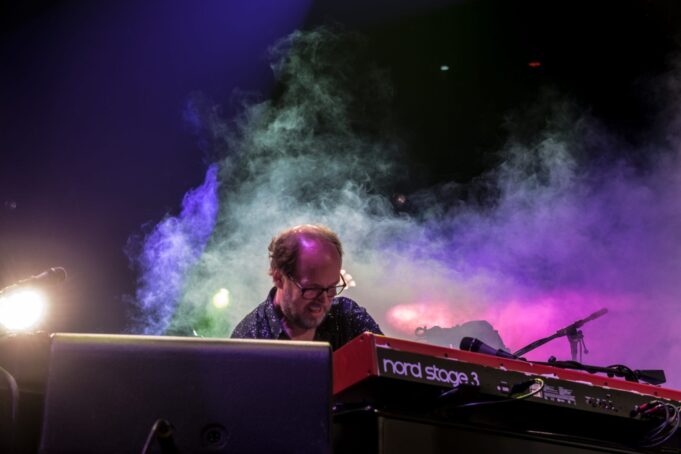 With fifty six shows spanning over twenty four years, the boys from Vermont, Phish, have made 4 Pennsylvania Plaza (Madison Square Garden) their home for New Years Eve run of shows. With fans flocking from coast to coast for the iconic jamband, the four veterans always bring out some of their best shows of the year in The Big Apple.

Whether you were in attendance for the opening notes of The Hollies tune “Long Cool Woman in a Black Dress” in December of ‘83 or Madison Square Garden will be your first show, you are part of Phish history.

One thing is for certain at a Phish show: Expect the unexpected. As Madison Square Garden became a melting for people of all ages, the band started right where they left off during their Las Vegas Halloween run with “We Are Come To Outlive Our Brains”, which was part of their elaborate Halloween show that they billed themselves as a Scandinavian Group, Kasvot Växt.

Check out the full gallery of photos by Billy Heigl here.

“Axilla I”, brought the electricity of the capacity crowd to the next level as ringmaster Trey Anastasio (on guitar) led the seasoned veterans right into “Free”. The Billy Breathes number gave the chance for Mike Gordon (on bass) to shine, with some tasty lines.

One of the highlights of the first show of the four-night run was “Meat”, for the four members were loosening up at this point in the evening. Taking charge on lead vocals was Gordon, as Jon Fishman, nestled in the back of the stage, executed a perfect drum break down. The groove gave way for “The Chairman Of The Boards”, Page McConnell, to funktify the song with his keyboard wizardry at the song’s end.

“Ghost”, a fan favorite, proved to develop into a space jam led by Anastasio and McConnell that gave way for the ever popular uplifting “Sparkle”. The purity of twenty thousand of your closest friends singing “Laugh and laughing fall apart” is one of the many reasons why the Phish community is one of the tightest around the country.

The foursome were diving deep into their catalog as they brought out an oldie but goodie ballad, “If I Could.” That led straight into Fishman’s hi-hat which welcomed the introduction of an intense rendition of Rift’s, “Maze”. Closing out the first of eight sets of music at The Garden, “Walls Of The Cave”, left the audience all smiles flowing into the hallways.

As the crowd nestled into their seats and floor spots for the second set, there was buzz around the arena of what was up the band’s sleeve for the second set. Clocking in at just over seventeen minutes “Set Your Soul Free”, set the tone for the second set, with Anastasio having an opportunity to use his effect pedals and McConnell tickling the ivories like a master. The lyrics rang true to fans throughout the building: “We’re all here together, in this spirit family. Everybody’s dancing, everyone can see”.

With excitement in his eyes, Anastasio dove into the second Kasvot Växt number for the evening, “The Final Hurrah”. The four virtuosos are feeling the energy that their fans are giving them with their new songs. “Bathtub Gin”, a Phish staple in their live shows for almost three decades, stood out to be one of the highlight “jams” of the opening night. With McConnell’s opening well known piano riff to Fishman’s perfect tempo, the veterans were firing on all cylinders at The Garden.

With his classic head bobbing, Gordon kept the tempo going with his deft bass playing. Bringing the second set to a triumphant finish, “Possum”, was the perfect ending that featured a holiday themed tease of “Little Drummer Boy”.

Before sending the 20,000 glowing fans into the streets on this mild December evening, a standard “Bouncing Around The Room” led into a powerful rendition of “Slave To The Traffic Light”. With the band’s solid performance on the first of four nights, along with Chris Kuroda’s spot on lights throughout the evening you could chalk this one up as a success on all fronts.

Phish is a group of musicians that if you have seen them once or three hundred times, their live performances are always amazing. Thirty five years later they are still bringing fans from across the country to become part of their musical family for a night or two. The band optimizes what a live musical experience truly should be.

Set 1:
We Are Come to Outlive Our Brains
Martian Monster
Axilla (>)
Free
The Wedge
Meat
Ghost (>)
Sparkle
If I Could
Maze
Walls of the Cave
Set 2:
Set Your Soul Free (Trey Anastasio song) (>)
Swept Away (>)
Steep
The Final Hurrah
Fuego (>)
Shade (>)
Bathtub Gin (with ‘The Little Drummer Boy’… more )
Possum
Encore:
Bouncing Around the Room
Slave to the Traffic Light