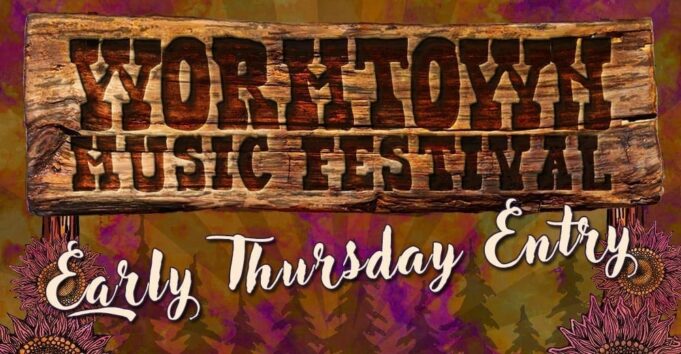 Like many others, I watched the weather developments as Hurricane Florence moved westward in the Atlantic with an eye toward New England with hopes that the weather would be fine for the twentieth anniversary of the Wormtown festival. Hopeful of course that our friends in the southeast would be alright, while selfishly wondering how my own weekend would turn. Thursday morning dawned cloudy but the rain was holding off, and I packed up my car and gear and took the short trip from my north central New England home to Greenfield MA and Camp Kee Wanee for the early bird opening. I pulled in with great ease, there was almost no traffic either in Greenfield or the approach to the festival itself. Check in was a relative breeze and I had no problems getting myself and my gear to our camp.

Thursdays are interesting for sure, with the most excited and enthusiastic festivarians arriving to stake their claim and to suck up every note and vibe available for this special weekend. Being the early bird night, the main stage was setting up with sound and light and the musical performances would be housed in the two late night cabins, albeit not so late night starts on this night. Fiddlehead opened up the Kee Wanee cabin with a set starting at 5PM, opening up the whole festival. I expected from the name for it to be a bluegrass oriented band, but when I wandered in briefly there was more of an indie rock jam band coming off of this rock outfit.

At 6:30 PM, rice – an American Band opened up the Wormtown cabin. The ninety minute set included mostly original material but also some covers. The band was seven pieces that night with Brian DiMartino and Joshua Leach on lead guitars, Kyle Heon on drums, Emily Jones on vocals, Steve Benson on mandolin vocals and pedal steel, Lauryn Winiarski on bass and vocals and Phil Simon on guitar and vocals. The band premiered a new original called Hard Time which was a bit dark and intense and followed that up with a pair of Pink Floyd songs with In the Flesh? (Part One) straight into Comfortably Numb. DiMartino in particular took a scorching solo that soared. Another original Slack Jawed seemed to be a favorite of rice fans, and the set ended with the original rocker Flow of Things.

Roots of Creation had taken over for Fiddlehead in the Kee Wanee cabin, bringing their Grateful Dubs tour for a steamy set. Max Creek percussionist Jamemurrell Stanley was a featured guest.

Brett Wilson and his band raged through some two hours of both original music and Grateful Dead favorites that have been turned out through a reggae rock tumbler. RoC originals like Trouble, Oh Lord, and Three Times a Lady were mixed with Grateful Dead songs like Love Light and They Love Each Other. I was able to catch up with Brett Wilson and he was kind enough to give us an update on all of the craziness going on with Roots of Creation, “”It was an amazing experience to perform in the intimate cabin to celebrate 20 years of wormtown with all the worms. We cut our teeth playing late night cabin sets and have grown our roots and our RoC family. It was one of the first festivals we ever played where we felt at home in the beginning of our touring career. We would like to congratulate all of the staff and crew on two decades of amazing vibes and music. Thanks for giving us a shot when no one knew who we were”

“To celebrate the 20 year anniversary and kick off the party right for the early entry Thursday festy fam.

We brought in special guest Jamemurrell “Chocolate Thunder” Stanley (Max Creek) on percussion threw down a mix of our new album GRATEFUL DUB (a reggae in-infused tribute to the GRATEFUL DEAD), original fan favorites, and a couple recently rarely played cuts “A Time will Come” “Jah Jah Give us Life (by Wailing Souls)” “Different” “Get Ready > Too Experienced (Barrington Levy)” Ending with “Garden Grove (Sublime)” > “Fire on the Mountain > Jam > Scarlet begonias tease” The setlist, instrumental passages and segues were 100% improvised in the spirit of Wormtown… unlike our recent tour dates. In true RoCknroll fashion we left right after our set and jumped on a plane for Jacksonhole WY. We hope all your worms had amazing rest of your weekend, partied hard, loved life and stayed safe! #teamnosleep”

Back at the Wormtown cabin Connecticut’s West End Blend were bringing the funk big time. A fun band that mixes serious funk and jazz chops with a palpable party vibe. Energetic instrumentation combined with the controlled vocal fury of Erica Bryan showcase their unique take on a well known genre. They are well deserving of your attention as you can both be amazed by their musical prowess while also easily getting down to their danceable jams. I also had the pleasure of catching up with West End Blend guitarist Mike Dipanfilo for a chat. It was an easy and casual conversation where we swapped stories about Wormtown and Strangecreek and he expressed strongly how great it was to be playing the twentieth anniversary of the festival.

“Our Wormtown Thursday set was one incredibly sweaty cabin dance party. We truly felt the love from the people who got down in the front row for the entire two hours and will look forward to next year! The band cannot wait to share our live experience on a broader scale with our first live album titled “Live at the Waterhole,” coming out Oct 5th, 2018. This was recorded at the Waterhole in Saranac Lake, NY during our first annual summer two night run called “The Blender.” The venue is a home away from home for us. The vibe and people who run the place are a big reason on why we chose to record it there. The song selection spans our 4 albums plus 3 songs that have been previously unreleased. We will be touring extensively throughout the fall to promote it.”

Being from nearby Connecticut has not slowed the band’s travels down and we talked about their tour schedule and stops as far away as North Carolina. Mike was especially excited about a double festival weekend for them, following this appearance they headed up to Vermont to perform at the sold out Grand Point North festival hosted by Grace Potter. Sadly I only captured just a couple of minutes of audio recording of their cabin set. I guess we’ll all have to wait for the live album!

Back in the Kee Wanee cabin the Max Creek trend continued. The Marks Brothers took the stage which features Mark Mercier of Max Creek on keyboards and vocals alongside Mark Paradis of Dead Show on guitar and vocals. They are joined by Brian Konopka and on drums and Dave Stoltz on bass. The crowd was eating them up and it was a great warm up for the whole weekend. The band deftly maneuvered through a lengthy and solid set of good old rock and roll. The final set that I heard, was experienced for me from a reclining position in our vending booth just a few dozen yards from the Wormtown cabin. It’s an interesting place to lay down, right in the middle of the two cabins, with the whole festival going on around us.

Hayley Jane and the Primates were the final band of the night and unfurled an imaginative and evolved set. This is a band that has grown up in front of the Worms, over the last few years performing in spring and fall and this is the most fully realized version of the band that I have heard thusfar. Hayley Jane herself has been an artistic force already for quite some time but I was struck on this night that the band has figured out how to truly showcase both her talents and their own. Moreso than accompaniment, this felt like a full band to me for the first time. The song writing is improving, the execution is improving and the band has rightfully earned the attention of this audience and they are taking full advantage of that attention. The years will attest to where they can go together but their spotlight is deserved and I look forward to hearing what they can do together. Jane’s voice is creative and artistic, and her range will not challenge the finest singers in rock and roll, but her individual take and her point of view is surprisingly unique. She is also effectively putting forth a lyrical point of view and eschewing an optimistic philosophy meant to uplift while also encouraging the audience’s inquisitive nature- about themselves, their surroundings, and the whole scene around them. Where will it go? It’s hard to say but I for one am curious.

From the video channel of Gus Hedding

A short night of sleep came after the final set and I was up bright and early shortly after the rising of the sun, anxious for the first full day of Wormtown to begin.  The hurricane held to our south, and the gale force winds were blowing off of cabin stages, and all was fine in the world.