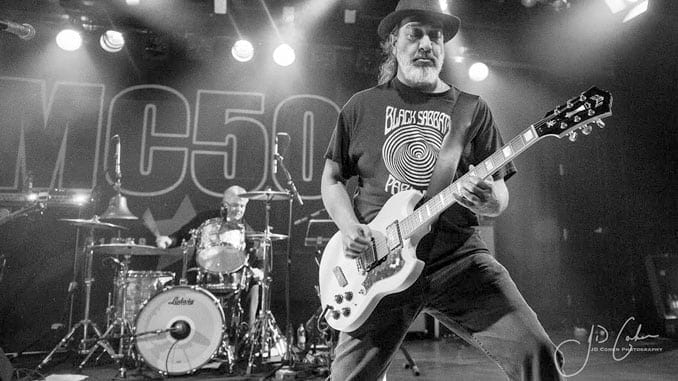 Rock n Roll is first and foremost about energy and rebellion and there is no other rock band that captures the energy and spirit of rebellion more than the MC5 (Motor City 5). More than 50 years after their tumultuous beginnings it’s hard to imagine how influential and groundbreaking the band was in their time. With only three albums to their credit released between 1969 to 1972 the band was famous for their legendary live performances, their political activism and their fiercely independent style of music. When their first and most popular album, “Kick Out The Jams” was released in 1969 the crude and aggressively raw style of the band was oddly out of step with the growing popularity of the hippie movement and the peace and love spirit of the late 60’s.  Allmusic called Kick Out The Jams “one of the most powerfully energetic live albums ever made” in their retrospective review. The album is a touchstone for hundreds of bands who were influenced by the heavy sound and punk spirit of the group. 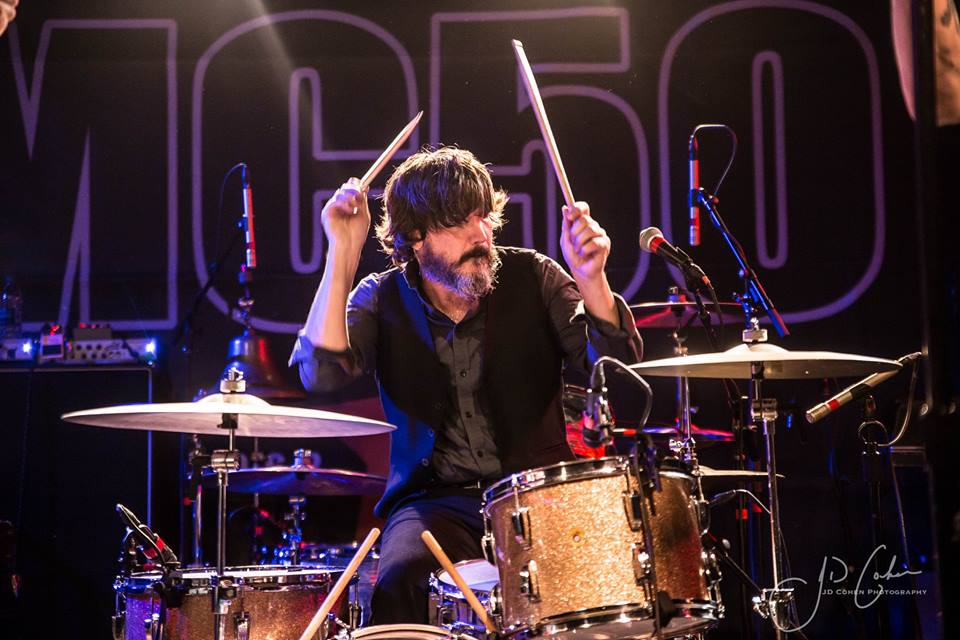 In addition to the heavy rock and free jazz approach to music, the aggressive style of the MC5 carried over into their politics and their personal lives. The FBI tapped their phones and kept them under close surveillance due to their connecgtion to the White Panther party and their militant left wing politics.  The band played for over eight hours straight at the infamous and violent 1968 Democratic convention and they incorporated their activism into their live performance, at times bringing guns on stage.

Founding member Wayne Kramer in the Prologue of his new and outstanding autobiography “The Hard Stuff” talks about the influence the Belle Isle police riot in Detroit had on him at the age of 19 in 1967. Turmoil and conflict surrounded the band since its inception and although Wayne Kramer is one of only two surviving members, it’s fitting that Kramer has decided to kick off the “Kick Out the Jams: 50th Anniversary Tour” this month during these turbulent and politically charged times.

On Thursday night September 13 Kramer brought his all-star MC50 lineup that includes Soundgarden’s Kim Thayil (guitar) Fugazi’s Brendan Canty (drums), Faith No More’s Billy Gould (bass) and Zen Gurilla’s Marcus Durant (vocals) to the Paradise Rock club in Boston. After a lively set of garage rock-and-soul by the Detroit Cobras, local celebrity and Motor City enthusiast Peter Wolf made a brief introduction. To the disappointment of many, Wolf never returned to join the MC50 on stage but the night clearly belonged to Wayne Kramer and his unyielding band of skilled rock veterans.

From the opening salvo of “Rambling Rose” it was clear the evening would be a special event and not just a nostalgia trip down memory lane. At the youthful age of 70, 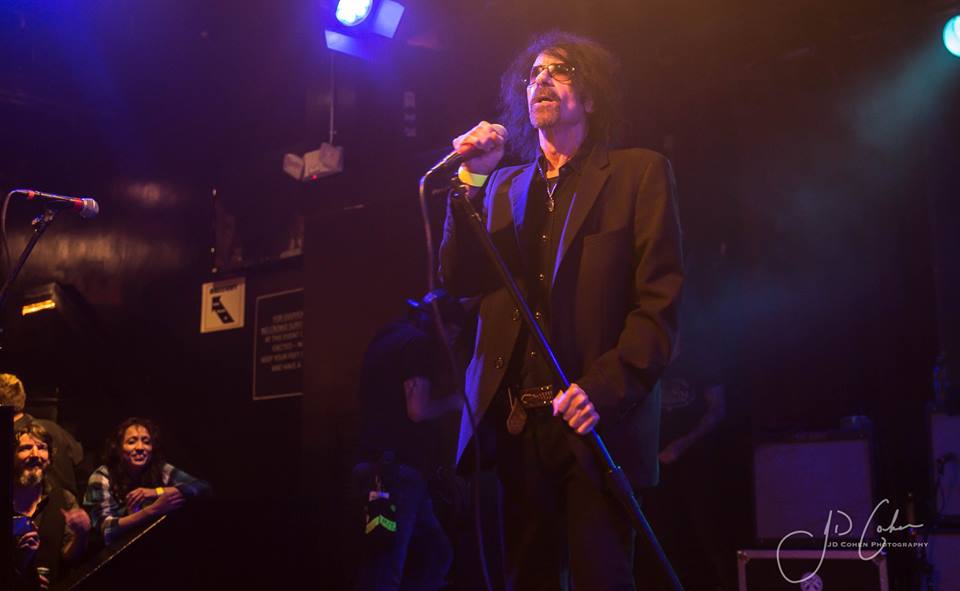 Wayne Kramer was in great spirits full of smiles, beaming proudly as he danced and twirled across the stage punishing his signature stars and stripes Fender Stratocaster guitar. Kramer’s good mood and energy was impressive by any measure and he was clearly enjoying himself throughout the performance.

Kramer looked fit and healthy with little evidence of the ravages of the rock n’ roll lifestyle and past battles with drug addiction. The crackerjack band Kramer assembled breathed new life into the MC5 catalog running through classics like “Rama Lama”, “I Can Only Give You Everything” (Them cover), and “Kick Out The Jams” in addition to the full blown free Jazz freak-out tribute to Sun Ra called “Starship” off the MC5’s first album.

Kramer was gracious in his acknowledgement of the original MC5 members and dedicated “High School” to their memory, played on acoustic guitar it was one of the more sensitive moments of the night. Although ferocious, the original MC5 could be rough around the edges and their live performance was often far from flawless so it was a pleasant surprise to witness the MC50 play the entire high energy show without any major missteps.

As always, Kim Thayil was professional and workman-like laying down a solid rock riffs and the rumbling foundation behind Kramer’s wild guitar leads. Often head down and leaning into his instrument, Billy Gould was completely locked-in, providing his signature Faith No More thumping and snarling bass.

Marcus Durant was the biggest surprise of the evening.  Not seen much since his days with the band Zen Gorilla which officially disbanded in 2003, Durant completely captured the spirit, the emotion and the passion of the MC5. It also doesn’t hurt that he looks very much like original lead singer and founding MC5 member Rob Tyner.

Whether it was his honking jazz on Starship or his emotive pleading on “I Want You”, Durant poured a potency and passion into the performance that gave the entire show the legitimacy of a genuine rock n’ roll happening and not just another tired revival tour. You have to commend Wayne Kramer for assembling such a talented group of musicians who may not have been obvious choices but clearly have the chops, the spirit and the soul to carry on the legacy of the original MC5. 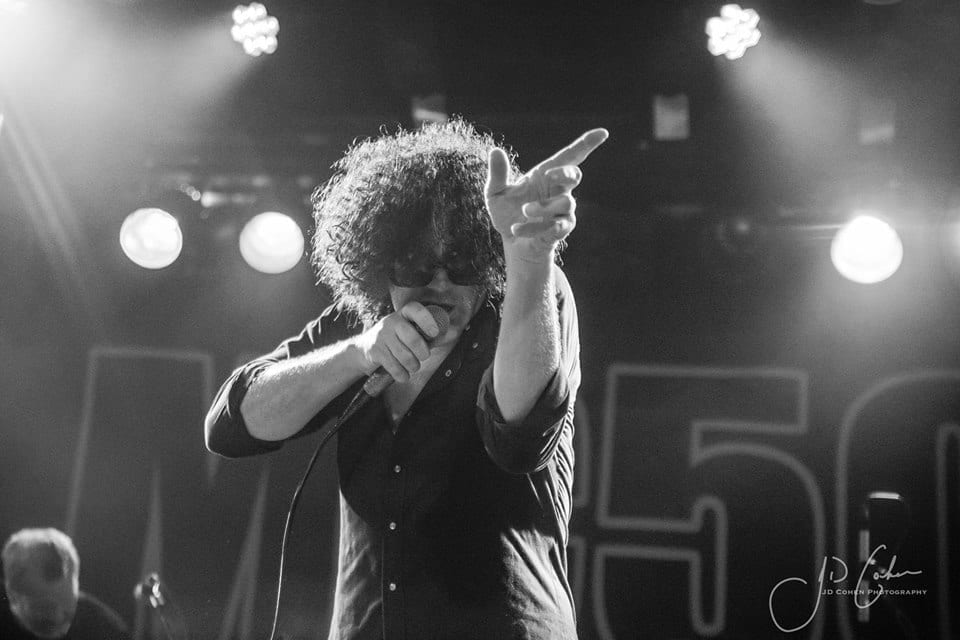 In a recent statement announcing the tour Kramer wrote “This band will rip your head off…It’s real, raw, sweaty, total energy rock and roll, like a bunch of 40-to-70-year-old punks on a meth power trip. “The message of the MC5 has always been the sense of possibilities: a new music, a new politics, a new lifestyle,”

“Today, there is a corrupt regime in power, an endless war thousands of miles away, and uncontrollable violence wracking our country. It’s becoming less and less clear if we’re talking about 1968 or 2018. I’m now compelled to share this music I created with my brothers 50 years ago. My goal is that the audience leaves these concerts fueled by the positive and unifying power of rock music.” With the MC50 Kramer has succeeded revitalizing the power and the glory of the MC5. Although the spirit of revolution and rebellion may have diminished some, Thursday’s performance was truly a celebration of life, energy, rock n’ roll and the youthful enthusiasm that lives inside all of us.

From the video channel of sassysb19