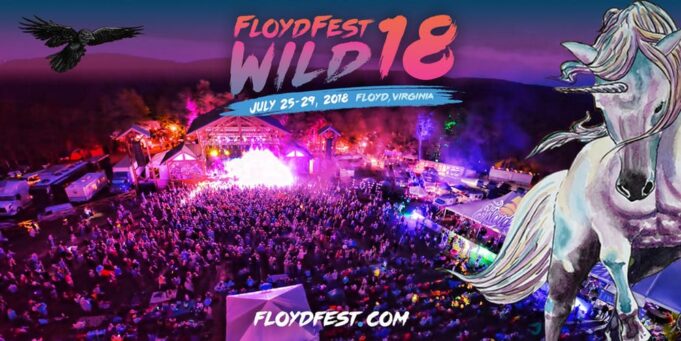 “Oh my God, Floydfest. Thank You. This feels like making love.” So said Adam Greuel, guitar player and lead singer for the six-piece progressive stringband Horseshoes and Hand Grenades, near the conclusion of their late-night, debut appearance at the 2018 FloydFest Music Festival. Even though they were performing at this event for the first time, HSHG found themselves playing at 2Am to a crowd of several hundred people, most if not all of them screaming and jumping with pure jubilation. That quote, delivered to this joyous, insomniac crowd of music lovers, seems as close a representation as to what the magic of FloydFest Music Festival is really all about.

At the top of the lineup list, FloydFest reached higher than ever, getting the likes of Foster The People, Jason Isbell, and more to perform strong sets to huge crowds of superfans. Throughout the rest of the list, however, were gems of live music that rivaled They brought back the Buffalo Mountain Jam, which saw its best set yet this year, and they invited the legendary Antibalas to perform multiple extraordinary sets through the weekend. Music festivals-the good ones at least-have far too many great moments to hope to relay them all. Floydfest, spanning itself across four days and over six stages, had far, far too many. Here from LMNR, as a lookback, are the top ten musical moments from Floydfest Wild ’18. 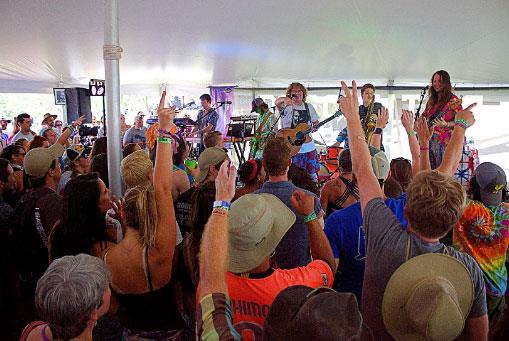 8. Kendall Street Company Gets Loaded in The Libations Tent Every year, Floydfest presents a lineup of On The Rise bands. And while it’s tough to choose a single performance for a list like this, there was one act that stood out from the rest. Kendall Street Company played mid Friday afternoon in the Libations Tent, FloydFest’s beer headquarters that had music running from dawn to sunset. As with other performers on this list, something helping secure KSC’s slot here is the ecstatic reception the packed audience was giving the band. Mostly college-age kids, but also lots of older heads, were screaming for the band by the time they got their steam going. Among many other great songs, KSC offered a buttery, groovy rendition of The Wood Brothers’ “Loaded,” which sandwich a sneaky “Turn On Your Lovelight” jam in the middle. 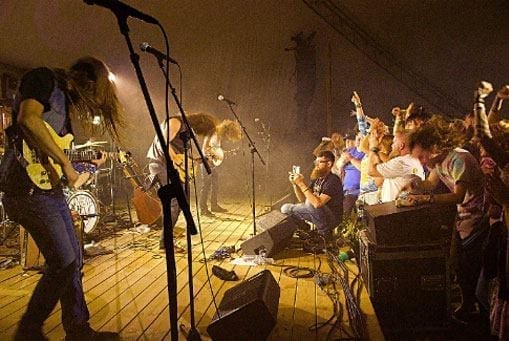 7. The Native Howl – Taking Out The Trash Ever hear of trash grass? (Think the picking tenacity of Trampled By Turtles meets the savage attitude of GWAR.) Ever see a band rage trash grass to a tent of hundreds of people at 1am? This reporter did, and it was as wild as it sounds. The Native Howl were not OTR-they’ve been around for a bit-but they did make their debut at Floyd Fest year, and it was one hell of a debut. They played at The Throwdown Tent, which was a debut stage for FloydFest. Towards the end of their electrifying set, The Native Howl were crowd surfing, chugging beer, and even had a few good friends sit in to sing-one of whom was the revered Lindsey Lou, the singer that wowed crowds of her own with multiple sets throughout the weekend. 6. Langhorne Slim – Hanging with The Crowd 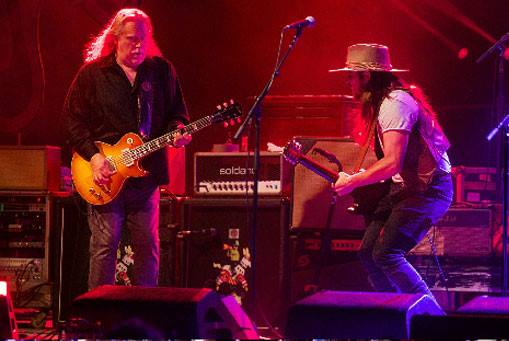 Surprisingly enough, The Native Howl weren’t the first to jump into the audience. This reporter made it down to the Floyd festival site just in time to hear the mystical punk-rockish troubadour Langhorne Slim start to sing the first notes of his set on Thursday evening with his band, The Lost at Last Band. Amid heartfelt stories about his childhood and finding success despite numerous failings, Langhorne, with his trio of players, was leaving it all out on the stage musically, wringing out every last bit of songs like “This Is The Way We Move” and “Changes.” A couple of men (not me) were tearing up in the front row. For real-the first night of four at FloydFest and people were tearing up from a performance, and if that doesn’t translate the beauty of this music festival, we’re not sure what else will. 5. Gov’t Mule + Lukas Nelson – Rockin’ in the Free World -> Machine Gun -> Free World 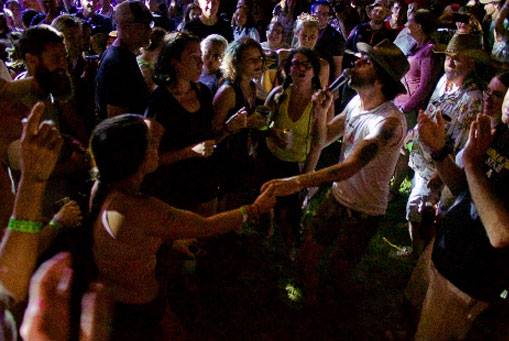 Later that Thursday night, FloydFest was treated to the first of its massive headliners, with a big and fine festival set from Gov’t Mule, fronted by the one and only Warren Haynes. But then the set was ratcheted up several notches when singer and guitarist Lukas Nelson-who would rage his own late-night set an hour later-joined the legendary Mule for a hair-raising jam on Neil Young’s “Rockin in the Free world,” which sandwiched in the middle an epic guitar battle between Haynes and Nelson on Jimi Hendrix’s “Machine Gun.” Again, the first night of four for this weekend. 4. Vince Herman’s Stoner War Pigs (Buffalo Mountain Jam) Everybody who witnessed FloydFest’s second ever Buffalo Mountain Jam this past weekend, a late-night supergroup set which included members of Leftover Salmon, Antibalas, No BS Brass Band, The Broadcast and more, would have their own different favorite moments of that sublime one and a half hours. From the Lou Reed 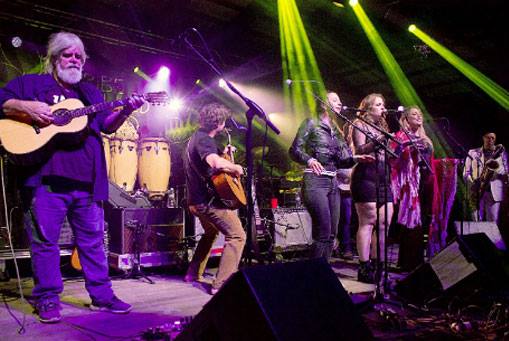 cover opener to Antibalas’ amazing Talking Heads jam, and everything in between, the set was chock full of musical headiness. But for this reporter, there was something extra cool about hearing Herman’s southern howl take lead vocals on Black Sabbath’s “War Pigs” while Antibalas surged the song to maximum intensity behind him. The best moment of the Buffalo Mountain Jam was split between that and the kooky story Herman told a little later on, about his wife busting his chops for watching Andy Griffith and smoking bongs. 3. Antibalas – We’re An American Band Antibalas were a magnificent piece of FloydFest’s lineup this year. They are masterfully dynamic performers, and they delivered big time three times over through the weekend, with jam after jam of cardio-inducing, horn-blaring afrobeat fervor. This weekend was especially potent, for during their first set, lead singer and percussionist Amayo showed up half way through the show. But it was for good reason-while the other members were staring up the 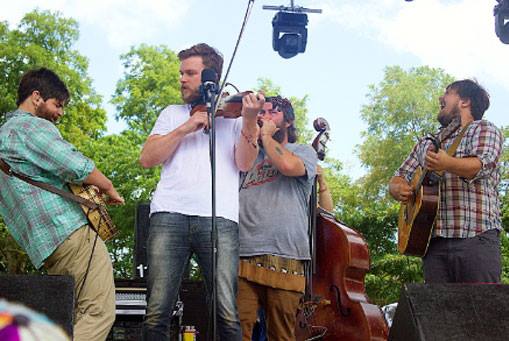 party on the main stage Saturday evening, Amayo was coming back from Richmond where he was receiving his U.S. citizenship. He returned half way through the set, the crowd roared, and the country’s newest citizen preached emphatically about coming together and fighting this American political system which sorely needs our help and our cooperation, and participation, as Americans and as equals. His words matched the beautiful certainty of his band’s music, and in the entire history of Floyd Fest past performers, this has to rank high up there with all of them. 2. Horseshoes and Hand Grenades – “All My Friends” Perhaps you’ll not be surprised to find the performance behind the “This feel’s like making love” comment taking the number two slot on this list. This reporter was out and about during the majority of Horseshoe and Hand Grenade’s late-night set in the Pink Floyd Beer Garden, but made it just in time to hear them cranking through a rousing 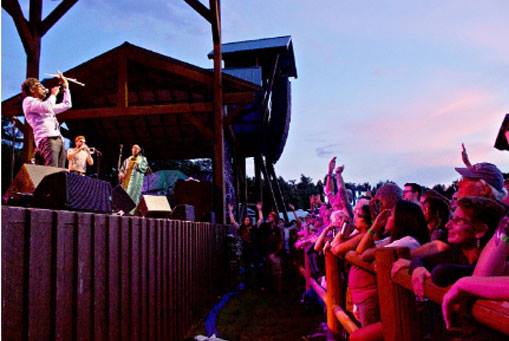 stringband delivery on Pink Floyd’s “Time.” This was way beyond the normal limits of regular late-night crowd hype, and the energy swirling around that garden close to 2am was what obviously prompted HSHG’s guitarist to wipe a tear from his eye in disbelief. 1. Greta Van Fleet – The Band To Save Rock n’ Roll From the video channel of MicTheGuitarMan

mixed reviews of the band in general, and I guess I can understand that. But somewhere in the primordial depths of that second song, when the Kiszka trio of brothers and their drummer Danny were reaching volcanic heights of pure, in-the-moment, rock ‘n roll fury, the crowd started going absolutely apeshit, and myself and some of the other photographers simply stopped shooting so that we could shake our heads and try and process what was happening on stage before us. It was a wild, pivotal moment that will be forever frozen in my personal history of live music experience.If in the moment that Jake Kiszka finished that ten-minute plus guitar solo in “When The Curtain Falls,” the second song of Greta Van Fleet’s late-night performance at FloydFest, I knew I would be making a top ten list of weekend moments later on, I would’ve known right then that this would be at number one. There are mixed reviews of Greta Van Fleet’s set from this weekend, and