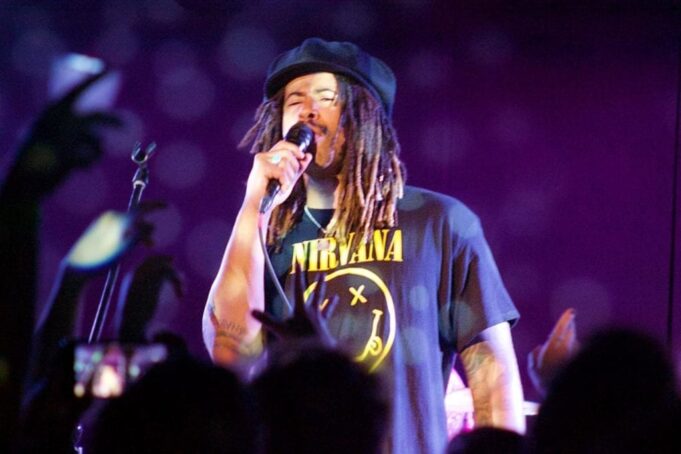 “We did all the New York stuff today-we had a hot dog, we rode the subway!” So said the keyboardist for the six-piece psychedelic surf band Ocean Alley, midway through the only New York gig on their first ever North American Tour, this past Friday at Manhattan’s Mercury Lounge.

The satisfaction, as well as a sense of amazed humility, from the Aussie rockers selling out a room in New York City on their first tour through a country all the way across the world was definitely apparent.

Indeed, Ocean Alley, who have been doing their thing has clearly made an impact upon fans of indie trippy surf music in a big and fast way. On the night of their impressively played show, before you could even get to the lounge part of the Mercury Lounge, the screams of the Manhattan crowd were nearly drowning their sound and everything else out. And through the sound of all that excitement came the enticing, unique sound of Ocean Alley. Heavy and sonically droning, but instead of bogging down it was swirling around in rich color, through really nice melodies and an alluring fuzziness propelled by concentrated guitar and keyboard solos.

“Knees” and “The Comedown,” two newer songs which came at the apex of their quick but definitely chock-full set, are both a prime litmus for the distinct sound of Ocean Alley. They disguise reggae as slow soul with drops of dream pop, and they would feel perfectly at place in a retro high-school final dance, if that school was the hippest, most-indie-ish school around.

By only a song or two in, the energy had already made its way to that sweet spot of blissful live abandon, channeling back and forth between a band really laying into their material, and an audience eating every bit of it up. The hit of the night though, at least for this reviewer, was the band’s ultra-catchy song “Flowers and Booze.” If there’s any of the bands jams that should flood American radio airwaves, it’s this one. It’s Santana meeting Talking Heads and taking a stroll through Echo Park. People that weren’t flailing their limbs or jumping in the air before, were doing so now at this point of the set.

In between all the feel-good, escapist grooves of the songs was a welcome rapport between band and crowd. The former, or mostly its lead singer and keyboardist, were certainly working a clever, stage-banter-tested charm over the latter, but it was all welcome given the ubiquitous feeling of gratitude going around both room and stage.

After the last tune of the set, the New Yorkers were begging for Ocean Alley to stay.  The band did return with a neat encore of “Baby Come Back” that actually wasn’t in the least bit ironic-it was pushed for a few fascinating moments into the same slow, sonic surge of all their other jams.

Ocean Alley should make their way back to NYC as soon as possible. To see them this first time around in the intimate dive Mercury Lounge was no doubt a special treat that may have been one time happening-when they come back they’ll probably be filling out the spaces of Music Hall of Williamsburg or Grammercy, or bigger.